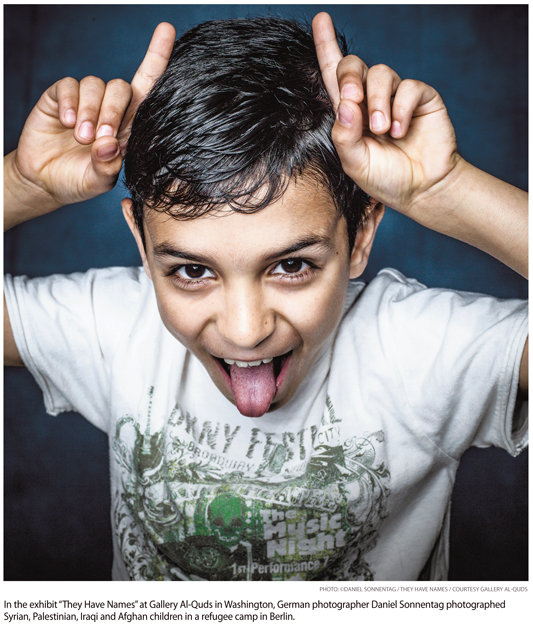 In most news accounts, refugees are just cold numbers calculated in the thousands or millions, not real people with faces, names and life stories ripped asunder by war.

The faces of refugees are emerging from the statistics through the work of artists in the D.C. area and across the world who are protesting injustice on numerous fronts, ranging from the many controversies triggered by the Trump administration to human rights abuses by totalitarian regimes. In a world that seems to be coming apart at the seams, artists are battling war and politics with creativity, joining a long tradition of protest art that has galvanized social movements and at times helped topple governments.

In a recent exhibition titled “They Have Names” at Gallery Al-Quds in Washington, German photographer Daniel Sonnentag photographed Syrian, Palestinian, Iraqi and Afghan children in a refugee camp in Berlin. Germany has been more receptive of immigrants than many European countries, although there has been a right-wing nationalist backlash there as well. More than 300,000 children, including almost 36,000 unaccompanied children, sought refugee protection in Germany last year, representing 41 percent of all applicants. Many of Sonnentag’s large-scale portraits of these children show their resilience with smiles spreading across their young faces despite the upheaval in their lives. One girl sticks out her tongue with a mischievous grin while a boy sticks two fingers above his head like devil horns.

“He wants these children to look like children you might know, like your child, nephew or neighbor, and to humanize them,” said Dagmar Painter, founder and curator of Gallery Al-Quds, which focuses on art from the Arab and Islamic world. “We want to change the perception of refugees as victims to survivors.”

Art can encourage people to look at seemingly intractable conflicts in a more accessible way, Painter told The Diplomat. “Artists have skills and they want to do something within their realm of possibility,” she said. “You see what the message is, and that resonates with you and lasts in a way that a 30-second news flash won’t.”

Gallery Al-Quds, a cultural program of the Jerusalem Fund for Education and Community Development, also hosted a panel discussion on the growing role of empathy in the arts along with the Middle East Institute’s Arts and Culture Program and the Goethe-Institut. The German-focused Goethe-Institut, which partnered with Al-Quds for the “Names” exhibition, hosted a related display called “FORTY out of ONE MILLION: The Human Cost of the Syrian War.” The exhibit, which runs until June 16, features portraits by German photographer Kai Wiedenhöfer of 40 war-wounded Syrians in towns, villages and refugee camps in Jordan and Lebanon between 2014 and 2015.

Given that Germany has been the epicenter of Europe’s migration crisis, taking in over 1 million refugees in 2015, the Goethe-Institut has held a series of events and exhibitions examining themes of immigration and displacement. Likewise, embassies have waded into sensitive political issues through art. The Greek Embassy recently hosted a discussion on “Creativity in Times of Crisis: Emerging Arts in Athens,” exploring how the country — which has also been at the forefront of the refugee crisis while still battling its own economic crisis — is incorporating politics into its arts scene. The Mexican Cultural Institute has confronted President Donald Trump’s incendiary rhetoric about Mexican immigrants with exhibitions that try to present a different side of bilateral relations and the U.S.-Mexico border (also see “Two Exhibits at Mexican Cultural Reflect on Immigrant Experience” in the May 2017 issue).

In another exhibition at Gallery Al-Quds titled “Necessary Things,” Arab-American artist Helen Zughaib takes a subtle approach by creating small objects inspired by the humanity of refugees, including a painted pair of children’s shoes and a memory box that could be filled with mementos of home.

“I don’t feel like a political artist,” Zughaib told The Diplomat. “I feel like I’m talking about the results of war and displacement and what happens primarily to women and children because they often bear the brunt of war. We can’t even envision how many thousands and thousands of people have died or been displaced or severely affected by the [Syrian] war. It’s almost too big to grasp.”

The daughter of a Syrian father and American mother, Zughaib grew up in Beirut but was forced to flee in 1975 when she was 16 years old at the outbreak of the Lebanese civil war. Thirty-five years passed before she returned to Lebanon in 2010, when she also traveled to Syria to see her father’s homeland before the brutal civil war erupted there. Her father grew up in Damascus but moved to the United States in 1946 and later became a naturalized U.S. citizen. He obtained a doctorate in political science and joined the U.S. Foreign Service, which took him to Beirut where Zughaib was born.

Zughaib lives in Washington and remembers the discrimination she felt as an Arab American in the aftermath of the 9/11 attacks when a man spat in her face. But she says she is more optimistic now about the possibility of reconciliation despite Trump’s anti-immigrant rhetoric and his travel ban targeting six Muslim-majority nations that has been blocked by court challenges. Zughaib isn’t Muslim, and she says her work reflects larger issues of the Arab world.

“If we don’t have optimism, then we don’t have anything,” she said. “I’m trying to say we’re all the same. Muslim, Christian, it doesn’t matter. I really get down to the human level of it.” 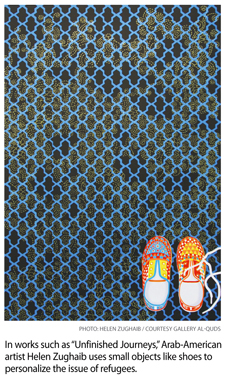 The Trump administration has fueled politically charged artwork on many fronts beyond the refugee crisis, including the proposed border wall along the Mexican border, Russian interference in the presidential election and Trump’s threats to slash arts funding.

At the Touchstone Gallery in Washington, almost 100 artists from across the United States sharpened their social commentary in “Art as Politics,” a group exhibition held last August before Trump’s surprise defeat of Hillary Clinton. Many pieces lampooned Trump, some depicting him as the anti-Christ or Humpty Dumpty. The exhibition had record-breaking attendance at the artist-owned gallery, said Touchstone Gallery Director Ksenia Grishkova. “This is the moment to do something political, and the response was absolutely overwhelming,” she told The Diplomat. “It was much more than I ever anticipated and imagined.”

With the many crises stemming from the Trump administration, Grishkova is excited to see what artists are working on now, so Touchstone Gallery is planning a new exhibition of political art titled “Art of Engagement.”

Local artists also are working outside typical gallery settings to stage their own exhibitions of political art. The NoMüNoMü collective organized an exhibition last month titled “Now More Than Ever” at the nonprofit Washington Project for the Arts. Featuring a campaign poster of Richard Nixon, the exhibition’s title refers to his 1972 campaign slogan and features artwork critical of white privilege and the long history of racial politics in the Republican Party, said Joseph Orzal, one of six collective members with artwork in the exhibition. Trump succeeded in “catering to whiteness and drumming up white fear” in much the same way Nixon did, Orzal told The Diplomat. Orzal created granite tablets resembling tombstones or official decrees with printed text reflecting on racism in America, including a report examining biased police conduct in Ferguson, Mo., where riots erupted following the police shooting death of an unarmed black man named Michael Brown in 2014.

Orzal grew up in Washington and attended the Duke Ellington School of the Arts and the Corcoran School of the Arts and Design. He sees larger problems for D.C. artists than Trump, mainly from the forces of gentrification that are driving up rent and eliminating alternative venues where artists can show more challenging work that isn’t welcomed by profit-driven galleries.

“Given the art landscape in D.C., artists are struggling to find studio space and places to show work in their own context,” he said. “We’re being beaten already by development and developers. Our fight can’t be with Trump if we’re being beat by our own city.”

For centuries, artists have expressed their views about the political controversies of their day, ranging from the Dadaism movement’s challenges of nationalist sentiments to Pablo Picasso’s famous painting “Guernica” depicting the horrific human toll of the Spanish Civil War. Contemporary artists are continuing that tradition with their own artwork that hopefully will have some lasting impact, Zughaib said.

“I think it’s important that artists document what’s going on in their times,” she said. “It’s another way of preserving the moment that we’re in now for the future.”

Brendan L. Smith (www.brendanlsmith.com) is a contributing writer for The Washington Diplomat and a mixed-media artist (www.dcmixedmedia.com) in Washington, D.C.