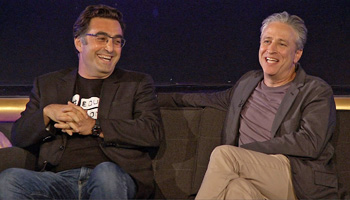 At a special preview screening in Manhattan of the smart absurdist comedy “Rosewater,” American writer-director-producer Jon Stewart (“The Daily Show”) bantered about his first feature film behind the camera with fellow political satirist and Comedy Central television host Stephen Colbert (“The Colbert Report”). They were joined on stage by London-based Iranian-Canadian journalist Maziar Bahari, who co-wrote the non-fiction bestseller book “Then They Came for Me: A Family’s Story of Love, Captivity, and Survival.” The post-screening Q&A was a barrel of laughs, as expected when Stewart and Colbert are involved, but Bahari also held his own.

Stewart adapted Bahari’s memoir into the English-language screenplay for “Rosewater,” in which Mexican leading man Gael García Bernal (“Y Tu Mamá También,” “The Motorcycle Diaries”) stars as Bahari. While covering the disputed 2009 Iranian presidential elections and protests for the BBC, Bahari was arrested, imprisoned and brutally interrogated for 118 days on charges of espionage, until he was freed following international pressure. The film’s title refers to the rosewater that Bahari said he smelled on his captor.

“After he was released, he came to New York. He wrote an article for Newsweek about his experience,” Stewart recalled. “He was still in Iran for about three days [after his release]. His interrogator and Haj Agha, who is the boss of the interrogator, took him out for coffee.”

Colbert chimed in with a joke: “A little Nescafé?”

Stewart proceeded with Bahari’s story. “They sat down with him and said, ‘Just so you know, you’re getting out. But if you tell anybody about what happened here, we will bring you back in a bag — and not the nice bags you see in the airport. The bad bags.’ And he thought, right then and there, ‘I will write this article on the [expletive] plane.'”

Stewart was personally involved with Bahari’s situation in a wacky case of life intersecting with art. The Iranian authorities presented a video of a comedic segment from “The Daily Show,” in which Bahari is satirically interviewed in Tehran about the presidential elections, as evidence that Bahari was an American spy. Colbert grilled Stewart: “Did you feel guilty about that?”

“We felt nervous because ‘What do we do?’ We didn’t feel guilty because it’s banal,” Stewart replied.

Colbert concurred. “I used to do what you do,” he quipped.

Stewart carried on. “It’s banal idiocy. The idea that that could be weaponized is a remarkable leap of faith. It shows that it’s a pretext, that they were searching for any methodology for which to link him as a saboteur between reformist elements within Iran and then Western elements that were coming in.”

Colbert pointed out that, “If cameras can be weapons, is the film a weapon?”

“I believe it is a weapon, but it’s a soft weapon,” Stewart clarified. “I don’t believe a film, I don’t believe a skit, I don’t believe anything that you can do can change the world in the way that we want it to in the narrative we create in our minds. We want things to tidy up in … an hour and 42 minutes. We want to have a resolution to it. What I do believe is bearing witness — creating a conversation that hopefully is more nuanced and thoughtful than the conversation that had previously been occurring — becomes weaponized in its aggregate. It changes the momentum of a conversation.

“If this is a weapon, it is the type of soft weapon that comes from breaking down what had been a one- or two-dimensional conversation. In America, the conversation about Iran is, ‘You’re the Axis of Evil.’ In Iran, it’s, ‘You’re the Great Satan.’ Hopefully, this begins to create a conversation that uses more texture.”

Stewart manages to make the film as much fun as 118 days of solitary confinement and torture could be while seriously addressing such a solemn subject. “I was able, I think, to allow the humor to live organically. It’s in the book,” he said. “That’s what so compelling about the book. For us, we’ve always lived by this idea that in your darkest moments, humor can be a shield of sorts. It can give you sustenance.

“But what if you remove the audience? He’s in solitary. The audience is gone, and you and I both know it. Would humor still be something that could grant you sustenance in a vacuum?” Stewart asked. “Maziar was able to retain his humanity in that vacuum by still being able to conjure the absurdity of a situation, by leaning on his culture, his family, his memories, his rich history…. So the humor I tried to not impose on the story. It could have been a ‘Strangelove’ story. It could have created black comedy and farce and characters of a grand absurdity at play, but I thought it would have detracted from the reality.”

Colbert shared with Bahari how he was struck by the banality of the Iranian security bureaucracy. Speaking about his torturer, nicknamed the eponymous Rosewater, Bahari quipped, “Like any other employee he comes to work, he punches his card, he tortures people, he gets overtime and he goes home.”

Stewart added, “At the time, 2009, there were thousands of people that had been arrested. So these guys, to them, it’s the busy season for them. It’s like tax time.”

Bahari offered a similarly witty response to Colbert’s question about Iranians seeing the film. “I’m sure in Iran they’ll have the DVD by next week,” he joked. “I’d love the Iranian government officials to watch this film as a mirror to their actions, that they look at it and see how ridiculous they are, how brutal they are. Even if one person in the Iranian government watches this film and changes his behavior, I would be happy. I did my job.”

Stewart said he hopes the film changes perceptions about Iran — “the idea is that Iran is not a monolith. It has this incredibly complex and vibrant … youth culture, and it’s educated and artistic.”

“It was hopefully a way of setting the film in Iran but not necessarily about Iran,” he continued. “It’s a more universal story of suppression, as technology has democratized who is a journalist, as citizen journalists have come to the fore. There are now not just journalists, but thousands of bloggers and activists who are being swept up and not just in Iran — in Egypt, Turkey, countries that are aligned with the West, not aligned with the West.”

Colbert interjected and noted that Jordan, the country where “Rosewater” was shot, has elements of both pro- and anti-Western sentiment.

“Jordan has issues with that,” Stewart said. “The United States now has this deep security state that we’re building that has very strange tentacles that reach out and put pressure on information and journalists. I always see expression as an antidote to ignorance and journalism as an antidote to ignorance. If I have any aspiration for the film, it’s for this to engage that conversation.”

“I think for the first time we see a nuanced image of Iran, an image with young people who are inclusive, open-minded, pro-democracy,” Bahari added. “And they are the best allies of the West. I think it’s very important for the American politicians … who subscribe to going to war with Iran to think about these young people. If they ever go to war with Iran, if they ever bomb Iran, these young people who are now the best allies of the West, they are going to be the first victims of this war.”