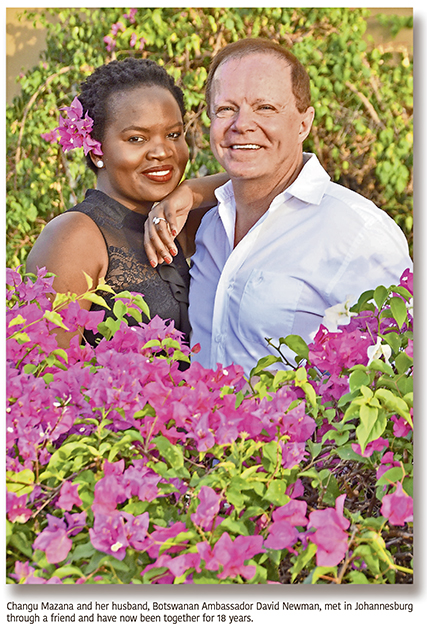 Changu Mazana, wife of Botswanan Ambassador David Newman and a student of massage therapy, says her “passion is to use my energy to help other people.”

“My grandmother was a healer who touched people every day through touch and massage,” she told us. “Just the happiness she brought to those she helped was so amazing. Growing up, I spent all my time with her. She and my aunt had so much influence on me…. These two women were the strength and pillars of my entire life. Their compassion, love and humility are what I aspire to have. They brought positive change to those they met and to communities they lived in.”

Mazana is currently studying massage therapy at the American Massage & Bodywork Institute (AMBI) in Virginia. “The lecturers are experienced and passionate about the field of massage. I couldn’t have picked a better institution than AMBI,” she said.

Mazana is also completing an online professional certificate in sustainable eco-tourism through the International Ecotourism Society and the George Washington University. She plans to combine massage and eco-tourism in spas at home and throughout Africa, and to teach massage to students in Botswana.

“I am passionate about massage more on a holistic approach. My interest is not just to be a therapist and masseuse but to help others … to train other young Batswanans,” she said. “I believe most people can massage but not everyone is a good masseuse and knows the art of using massage to heal. It’s a lot of energy you transfer when you give massages and, as the masseuse, you get energy back.”

This is not her first project. She helped to complete and launch Metro Men Grooming Emporium in Botswana’s capital, Gaborone, this past February with her business partner, Mody David, whose family has been in the hair industry for more than 15 years. Together, they came up with a men’s grooming salon concept where men can get their hair and nails done and have a massage. “It is not your usual barbershop but one that provides every man that walks through our doors with an experience.”

Interestingly, it is a 100 percent women-owned business and they plan to expand it to other African countries, creating new products and services.

Mazana dreams up her ideas while walking around their woodsy Potomac neighborhood with her best friend and neighbor Isabel dos Santos, wife of the ambassador of Mozambique. Both diplomatic wives have elaborate business plans for the near future. While Mazana is interested in establishing a chain of eco-friendly massage salons, dos Santos is a dress designer who has big dreams of creating a major design house (also see “Mozambican Wife, a Former Diplomat, Enters World of High Fashion” in the May 2019 issue).

“Isabel and I have crazy plans, goals and dreams,” Mazana said. “We are crazy enough to believe in ourselves!”

Mazana, who is now 42, didn’t start her professional life in the beauty and massage business. “Before we came to the U.S.A., I ran a construction company mainly focusing on roads. I am not an engineer but I was motivated to work with great minds in the field of civil works. These men mentored and supported me and worked with me to ensure we produced great works. I always wore a pink construction helmet!”

Because they are an interracial couple, Mazana and her husband are often asked how they met. David Newman, a law professor who came to Malawi from Britain on a program to strengthen legal training in Commonwealth universities, decided to stay, falling under the spell of Africa and its people (he renounced his British citizenship to become a citizen of Botswana).

Newman became a senior lecturer of law at the University of Botswana in the early 1980s before working as an attorney for 20 years, 14 of which he spent as managing partner of the legal firm of Collins Newman & Co.

He went on to serve as a judge of the High Court of Botswana for 10 years before coming to Washington in 2015 for his first ambassadorial posting.

“I met David in Johannesburg through a friend,” Mazana said. “He gave me a ride to Gaborone and we talked all the way. We started off as friends and …now we’ve have been together for 18 years. David is just the most special man in the world. I couldn’t imagine being married to anyone else,” she told us.

“He is the kindest and most compassionate person you will meet. His work ethics and principles are something I wish most leaders would learn from him. We are great friends and support each other in whatever we do. We both like similar things and we love to travel. I enjoy watching him [being] so happy doing what he loves, sharing his love for Botswana and its people with the world. He is a true representation of who we are as Botswana. 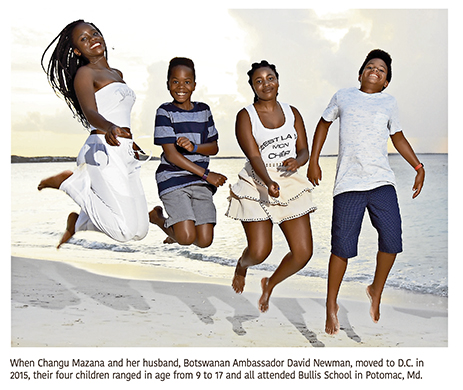 “Two people who love each other don’t see color,” she added. “When we first got our independence in 1966, our first president was black and his wife was a white woman. We have racial harmony in Botswana. It’s not something that bothers us because it’s part of us from the beginning. Our first lady was white. We welcome black and white. This is normal at home.”

In fact, “A United Kingdom,” an appropriately named biographical film about the political origins of Botswana’s racial backstory, garnered widespread critical acclaim when it came out in 2016. It tells the surprising true love story of Botswana’s last king and first democratically elected president, Seretse Khama, and Ruth Williams, the British-born clerk with whom he fell in love. They met at a dance when he, then a prince, was studying law in London. Their attraction and subsequent marriage led to controversy and power struggles, but this beloved couple eventually won over their newly independent country (the black and white stripes in Botswana’s flag represent racial harmony).

“It’s not just a love story; it’s history,” Mazana told Steve Hendrix of The Washington Post in February 2017 after the movie opened in D.C. “It’s just amazing to feel that Botswana is at the center of what democracy means, what interracial relationships mean, what love means.”

A majority-black country of just over 2 million people, Botswana has long enjoyed a reputation for racial equality, democracy, progressive social policies, good governance and a strong economy, all of which has made it one of most stable nations in Africa since the former British protectorate gained its independence in 1966.

Botswana is slightly larger than France and slightly smaller than Texas. This sparsely populated, landlocked country in Southern Africa is known for some of the most stunning wilderness and wildlife on the African continent. In fact, 70 percent of the land is occupied by the Kalahari Desert and 38 percent is comprised of national parks, reserves and wildlife management areas.

Although mining drives the economy (Botswana is home to the world’s largest diamond mine), tourism has become an increasingly important source of revenue as visitors flock to its nature preserves

While Botswana has been widely praised for its conservations efforts, it recently attracted controversy because it ended a five-year ban on elephant hunting. The government faced intense international pressure to keep the ban to protect the 27,000 elephants in the country. There are only 450,000 elephants left in Africa — one-third of which have found refuge in Botswana — and poachers kill around 30,000 each year. Critics also say the decision was motivated by Botswanan President Mokgweetsi Masisi’s efforts to woo rural voters ahead of elections later this year.

But the government defended the decision, arguing that Botswana’s tough ban on hunting had led to unsustainable levels of elephant population growth and was hurting local communities. In addition, the government said the ban had actually decreased revenues that go toward conservation efforts because limited trophy hunting can bring in significant income.

“By sacrificing 700 elephants per year we’re likely going to save more,” Erik Verreynne, a wildlife veterinarian and consultant based in Gaborone, told Kimon de Greef and Megan Specia of The New York Times in May. 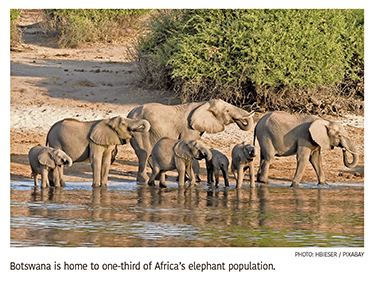 Despite the contentious elephant ban, Botswana has broken the mold with its progressive policies in other areas. In June, the country’s High Court rejected a 54-year-old colonial law that could imprison people in same-sex relationships. The landmark ruling stood in stark contrast to other African nations such as Kenya that still criminalize homosexuality.

Mazana says that because of its unique history and smart governance, she has high hopes for the future of her country.

“I have no doubt in my mind that Botswana will soon be the pride of Africa in every industry. To have such a dynamic leader [President Mokgweetsi Masisi] with a clear vision for his country and a first lady so supportive and in the forefront of women’s development, the future ahead looks great for Botswana,” she said. “These dynamic visionaries are looking for growth and change. They are open-minded and welcoming…. We are excited. Change is good.”

That applies to attitudes about interracial relationships, which have evolved significantly in recent decades, particularly in the United States. Despite the progress, racial tensions continue to percolate throughout the U.S., as evidenced by the Black Lives Matter movement.

“Being a biracial couple in Washington is easier than some other American cities. When we travel, it’s not a problem in New York or Miami. I haven’t been to other places, like the Midwest, where it might be uncomfortable. There is no problem in U.K. or Europe. It is not an issue,” Mazana observed.

“When I am the only black person in the room, I just get on with it in a positive way. I am a confident person and I think that helps,” she added.

On the flip side, at monthly African Ambassadors’ Group meetings, Newman is the only white envoy from a sub-Sahara country.

When they first arrived in 2015, their four children ranged in age from 9 to 17. The couple sent them to nearby Bullis School in Potomac, Md., which serves students from kindergarten to the 12th grade., so that they could all go to the same school regardless of age. Now their eldest, Pearl, is 20 and will be starting her junior year this fall at the George Washington University, where she will be studying international business. She lives just off campus and often brings her college friends home during the holidays.

She has another advantage for choosing GWU. Since the Botswana Embassy is not far from campus, she often has lunch with her father. Their younger daughter, Baraedi, is 17 and a senior. She plays basketball and soccer at Bullis and also runs and works out in their home gym. Their two sons, Khumo, 14, and Jack, 12, love cycling and soccer.

As the wife of a first-time ambassador, Mazana said the experience has been an eye-opening, pleasant learning experience.

“Being in the U.S.A. has been great, to come to a strange country and meet wonderful people who made us feel welcomed and helped us navigate the field of diplomacy,” she said.