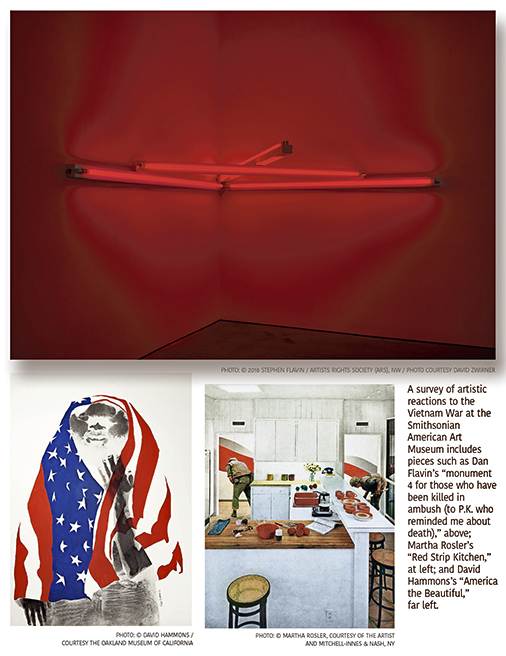 In the annals of U.S. warfare, Vietnam was a failure on so many levels that it’s difficult to keep track of the blunders that have become the subject of countless articles, books and documentaries. Political and military leaders repeatedly lied to the American public about the war and sought to suppress unsparing accounts such as the Pentagon Papers.

While street protests and anti-war marches have been thoroughly documented, the role of artists in opposing the war are less well-known. A captivating exhibition at the Smithsonian American Art Museum examines their work in “Artists Respond: American Art and the Vietnam War, 1965–1975.” Unprecedented in historical scale and depth, the exhibition features both famous and rarely discussed works and showcases previously marginalized artistic voices such as women, African Americans, Latinos and Asian Americans.

The exhibition includes almost 100 works by 58 artists who examined the devastating effects of the war through a diverse range of mediums and styles. Organized by the museum’s curator of 20th-century art, Melissa Ho, the exhibition features work spanning a tumultuous decade from President Lyndon B. Johnson’s regrettable decision to deploy U.S. ground troops to South Vietnam in 1965 to the fall of Saigon 10 years later when U.S. forces abandoned many South Vietnamese allies.

The work runs the gamut from subtle, such as Dan Flavin’s conceptual crisscrossing red neon tubes, to the sensational. The most extreme example is Chris Burden’s 1971 performance piece titled “Shoot,” where a marksman shoots him in the left arm with a rifle. The performance rings hollow like a publicity stunt rather than a serious examination of the deadly consequences of war. American soldiers dying in the jungles of Vietnam wouldn’t be impressed by a privileged white artist safe at home deciding when and where he will be shot in scripted, sanitized violence.

Yoko Ono’s pioneering performance titled “Cut Piece” is more poignant and powerful but may only be tangentially related to the Vietnam War. The performance in 1964, two years before she met John Lennon and became famous for war protests, shows her silently sitting on the floor at Carnegie Hall while white men and women step forward and cut off parts of her clothes that they then keep. Some seem tentative, making small snips, while a smirking man cuts a swath through the top of her dress and bra straps, causing Ono to flinch and cover herself. The implied violence against women digs deeper and questions our unspoken complicity in that degradation.

Vietnam was the first war that was beamed into living rooms across America through extensive TV coverage and newspaper articles and photographs. A war that had seemed distant suddenly came home in vivid color news reels of dying soldiers and napalmed jungles. Martha Rosler’s photomontage “Red Stripe Kitchen” from her “House Beautiful: Bringing the War Home” series flips that dynamic on its head, showing American soldiers inspecting a modern American kitchen. The work conveys a fundamental disconnect. Americans would be outraged if soldiers invaded their homes, but they were funding those same soldiers who were burning Vietnamese villages and committing atrocities such as the massacre at My Lai.

Leon Golub’s massive painting “Vietnam II” exposes that war machine in heartrending detail, showing U.S. soldiers armed with machine guns advancing on frightened Vietnamese civilians shielding their children in front of the charred timbers of their torched homes. Pieces of the unstretched raw canvas are cut out, creating an impression of horrors that remain hidden from view.

American soldiers, many of whom were drafted and didn’t want to fight, were mocked or ignored when they came home, exacerbating PTSD symptoms that would lead to alcoholism, drug abuse and suicide among their brethren. Artwork by some Vietnam veterans in the exhibition reveals those struggles firsthand.

Jesse Treviño was drafted and wounded in battle in Vietnam, resulting in the amputation of his right arm, which he had used to paint. In “Mi Vida (My Life),” he painted scenes of his post-war life on his bedroom wall, which was later cut out of the drywall and mounted on aluminum. His prosthetic arm and Purple Heart medal obscure part of his face while a ghostly image of a soldier with both arms still intact emerges to one side.

A former Marine in Vietnam, Kim Jones created a persona called the “Mudman” after the war and marched 18 miles across Los Angeles in 1976 carrying a structure of bound sticks and rope on his back, while his mud-coated body represented the choking red dust that swirled around the Marine supply base in Dong Ha. A ferocious battle there in 1968 left 68 American soldiers and 856 North Vietnamese fighters dead. Photos of Jones’s march and an installation of the stick structure with his dusty boots reveal his vulnerable trek that forced viewers to confront the aftermath of a war they were trying to forget.

“As Vietnamese Americans living in the U.S., our narrative of the war is almost invisible,” she said in a recent interview. “I’m interested in hidden histories or histories that were erased into official records. So the histories are real. They’re just not there for you to see.”