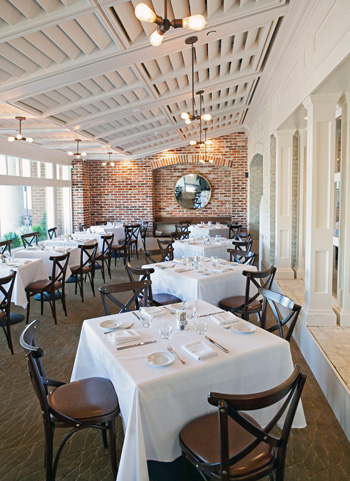 Chef Geoff’s Rockville is the latest addition to Geoff Tracy’s expanding culinary franchise in the Washington area, built around his business-oriented model of efficiency, precision and consistency.

In September, Geoff Tracy expanded his growing culinary imprint with Chef Geoff’s Rockville, bringing his hard-nosed business approach that has built up a string of successful area restaurants to a location that could use it. Chef Geoff’s Rockville fills a void in the old space that once housed Houston’s restaurant for many years, and more recently was the site of the defunct British gastro pub Againn Tavern.

The expansion of Tracy’s evolving dining empire to the Maryland suburbs (there are two other Chef Geoff’s in Washington, D.C., and one in Tysons Corner, Va., as well as Lia’s in Chevy Chase, Md.) will introduce Rockville diners to the casual-fine dining formula, dictated by exacting standards, that has made his other restaurants popular hotspots.

Located on Rockville Pike, the formerly dark space has been transformed with a soothing cream-and-gold color scheme that is brightened by white tablecloths and whimsical mason-jar light fixtures. The rectangular bar has been reconfigured to run the full length of the bar area, offering plenty of seating. The rest of the space is equally comfortable, with booth and table seating, though the tables are a bit crammed together.

As with the other Chef Geoff’s, the menu is extensive and eclectic, accommodating those looking for a quick snack as well as diners seeking a formal multi-course meal, a hallmark of the Chef Geoff’s brand. Snacks and appetizers, burgers and sandwiches, soups, big salads, pizzas, elegant entrées, and a nice list of vegetable sides vie for attention and can make choosing difficult.

Tracy and executive chef Santos Fuentes have rounded up the most popular dishes from the other Chef Geoff’s in creating the Rockville menu so diners who’ve visited the other locations will be on familiar ground. Because consistency is one of the values that Tracy works hard to achieve, preparations for shared dishes do not vary from location to location — except when it is on purpose. The Chef Geoff burger, one of the signature dishes that helped establish the reputation of the first Chef Geoff’s, is done differently at each location. In Rockville, the burger is an excellent variation, prepared with cheddar, bacon and green chili aioli, as well as horseradish havarti, frizzled onions, and steak sauce.

Tracy’s underlying concept for all of his restaurants veers from the heavy focus on innovation that dominates D.C.’s dining scene. Despite the fact that Tracy finished first in his class at the Culinary Institute of America, he is not driven by the creative side of the business, but rather by the understanding that at their core, restaurants are profit-driven ventures. Unlike many newly minted chefs, Tracy has said he was not motivated by the desire to display his culinary talents, but rather by the challenge of maintaining quality in all aspects of an operation, even in a high-volume business.

He set that as a goal with his first restaurant, and it has intensified with the addition of each new location. Tracy’s program to ensure quality throughout his restaurants is comprehensive and impressive. Performance data is derived from customer satisfaction surveys, reports of anonymous reviewers provided by a New York-based firm who visit each location monthly to assess of adherence to quality standards, and regular internal reviews. This is compared against a list of 800 — yes, 800 — performance standards that address practically every conceivable aspect of restaurant operations from the quality of each dish, to the table setting, to the exact temperature of the food going into the refrigerator.

In “Everywhere at Once: Chef Geoff Tracy’s Data-Driven Empire,” Todd Kliman of Washingtonian magazine wrote that “unlike most restaurateurs, Tracy places his faith in a highly unorthodox system that confounds many of his brethren in the business, a system that invites comparisons with the corporate tech world in its devotion to data collection and with baseball’s current crop of Moneyball GMs in its reliance on metrics and efficiencies. You’ve read about artist chefs, businessmen chefs, and even CEO chefs. Meet the chef as engineer.”

Tracy, in fact, engineers detailed rules such as the time it should take to relight a candle when it goes out (two minutes). Much of this minutiae is invisible to diners, but Tracy and his staff say the rigorous approach ensures the uniformity, efficiency and customer satisfaction that characterizes Chef Geoff’s.

While some may see Tracy as more control freak than chef, he created this business model in part to alleviate the need for micro-managing after realizing that he couldn’t be everywhere at once.

To that end, Chef Geoff’s provides extensive and ongoing training to staff as a key part of its quality control program. As Kliman wrote in his profile, “Most restaurants train employees for two weeks. At Tracy’s restaurants, education is constant. Every dish at every restaurant — more than 1,685 items — is digitized, with links to recipes and information for servers. There are custom-made training videos on everything from how to tourné a potato to how to enter an invoice. The emphasis on doing things precisely is one reason you’ll never hear a server say, ‘Are you finished with that?’ The gracious ‘May I clear the plate?’ is drilled into all waiters.”

But even the most well-oiled machines get clogged every once in a while. Recent experiences at the Rockville location suggest the training hasn’t sunk in yet with all the staff. While waiters are uniformly agreeable, they are not all equally skilled. Switched orders, spilled drinks, plate stacking and other small missteps may simply be the result of having to bring on many new employees to open the Rockville location who are not yet fully trained. Time will tell.

Tracy’s approach is somewhat of a novelty for independent restaurants of this caliber (many of which tend to be more free form in operation and seem to leave success to chance rather than control). However, similar data-driven approaches are the basis of many successful commercial chain restaurants. With his current plans to open five more venues in the area before 2020, Tracy will face an even greater test in maintaining both the precise standards and unique character of his brand.

With such a tightly controlled ship, one might expect Tracy’s restaurants to feel constrained, robotic and unoriginal, but that is not the case. While Tracy is not trying to attract the narrow segment of the dining population that seeks out the newest and the best, many of his dishes would surprise even those discerning, demanding palates. 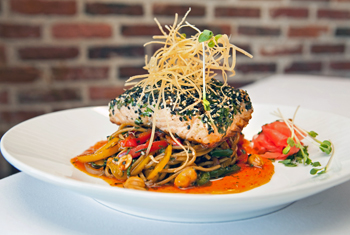 The pear and gorgonzola agnolotti ravioli, swimming in a bath of amaretto butter sauce and sprinkled with almond cookie crumbles, is on par with dishes coming out of even one of Roberto Donna’s kitchens. Interestingly, Tracy did an externship at Donna’s former flagship restaurant Galileo while at the Culinary Institute of America, an experience he says provided him with an example of how not to run a business. (The gifted but financially inept chef’s comeback restaurant, Al Dente — which opened as La Forchetta some months ago — is next door to the original Chef Geoff’s, which opened in the space vacated by of one Donna’s earlier ventures.)

Other highlights at Chef Geoff’s Rockville include the shrimp and Gouda grits, prepared with andouille sausage, tomatoes, peppers and onions — a guest favorite, for good reason. Meanwhile, the Chesapeake stew, a seafood medley served over finely textured cornbread with a sherry cream, is an inventive, refined take on more traditional seafood stews. On the other hand, the meatballs, served over nicely chewy spaghetti with a dollop of ricotta, basil and grana padano, taste strikingly like the little meatballs in a can of Campbell Soup’s Spaghettios. It’s comfort food that’s perhaps a little too comfortable.

Tracy is not above capitalizing on dining fads when they make sense for his operation. He’s responded to the recent resurgence of pork by creating a Bacon Bar, a special pork-laden menu available at certain times during the week. In Rockville, the menu sports such delights as bacon-wrapped, crab-stuffed shrimp served with poached pear relish, fennel and a syrah reduction. For the adventurous, the bacon and banana cream tart accented with bacon and macadamia brittle is an interesting salty-sweet dessert.

Tracy in fact gives serious attention to dessert at Chef Geoff’s. The tiramisu is intensely flavored with coffee liqueur, though it’s still less rich than some versions. The lemon cake, served with ginger raspberries and lemon ginger sorbet, is decidedly tart. And in an interesting take on carrot cake, the dish is “deconstructed” with the raisins and walnuts served on the side of a carrot spice cake and superb cream cheese ice cream. In fact, the ice creams and sorbets that are paired with the main attractions are high points on the dessert menu.

Chef Geoff’s is noted for its happy hours, so the beverage program is a vital part of its success. The new location carries on that tradition. Bar manager Nick Goldman has put together an extensive beer selection, with more than 25 varieties on tap, as well as a sampling of distinctive, tropical-themed cocktails crafted from juices and syrups made fresh daily using seasonal fruits and herbs. An international wine list of more than 80 mid- to higher-priced labels rounds out the menu. And for the nondrinkers, the menu offers intriguing house-made sodas, including cherry-almond, spiced pineapple, orange creamsicle, and grapefruit-rhubarb.

The motto at Chef Geoff’s is “Great Food, Libation, and Merriment,” which gets to the heart of its broad appeal. The menu can get a bit pricey despite Tracy’s desire to make his food widely accessible, but all-day happy hour specials in the bar areas on Mondays and Tuesdays and daily early-evening three-course sunset specials take the edge off some of the higher prices.

The wide-ranging appeal that has propelled Chef Geoff’s so far is likely to remain intact with his foray into the suburbs. Through extensive menus that offer something for almost everyone, consistently well-prepared and at-times innovative food, comfortable space and approachable service, Chef Geoff’s has become a favorite for professionals, students and families alike. Judging by the recent crowds converging on the Rockville location, the new Chef Geoff’s is destined to become another neighborhood favorite — offering a laid-back experience backed by an approach that’s anything but.