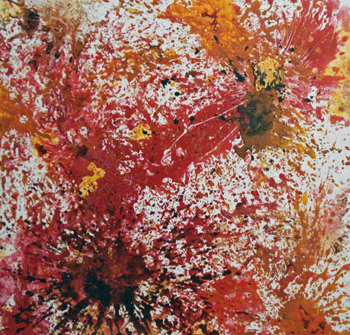 The Embassy of Argentina is the site of Franco Lippi’s paintings of the “Big Bang.”

At the modernistic Embassy of Slovenia, sunlight pierces through the windows of one of the larger rooms and plays off the images of moons, planets, rings and craters on the walls, giving the out-of-this-world photographs yet another dab of otherworldliness.

Meanwhile, at the Embassy of Argentina, in a room that seems to be on fire with thick acrylics heaped onto the canvas in a knowing frenzy, the paintings on the wall appear to blot out any sunlight in the world, circling the room like a halo of pent-up emotion.

The art differs between photographer Michael Benson’s exhibition “Beyond” at the Slovenian Embassy and Franco Lippi’s “Big Bang” at the Argentine Embassy.

One is nothing less than an exploration of our universe, the solar system and beyond in vividly realistic photographs crafted out of data and images from robotic missions in outer space. The other is an abstract, heatedly defiantly series of paintings that seem to plumb some other universe — absent of planets and moons, but full of the wounds and triumphs of the human heart and its passions.

Still, in a way, there is a connection. Both Benson and Lippi’s creations are all about impulse, vision and the melding of art with the unknown in works that are as boundless as the universe yet at the same time deeply personal.

Space is the starting point for Benson, a photographer, writer, filmmaker, book designer and exhibitions producer who in the last decade has staged a series of large-scale exhibitions of planetary photography. The ongoing project, titled “Beyond,” takes raw data from NASA and European Space Agency archives and recreates it into mosaics of individual spacecraft frames, producing seamless, large-format digital prints of landscapes that have never been experienced in the flesh by human beings.

Buenos Aires-born Lippi takes as his starting point the starting point for everything, literally. His “Big Bang” references the precise moment when the universe came into being.

Benson shows us the moons of Jupiter, the abstract shapes of craters and patterns of planetary dust that possess an amazing grace, yet also reveal the primordial vastness of space.

Lippi’s canvases are just as expansive and enigmatic, delving into the limitless possibilities of the unknown, with humans as mere specks in a spectacular universe. There are no quiet moments in “Big Bang” (it’s a big bang, after all), but plenty of roiling imagery that seems to move, as if in the process of becoming.

Lippi’s work reminds you a bit of Jackson Pollock’s thick, abstract creations, full of jubilant as well as agonizing acrylics. 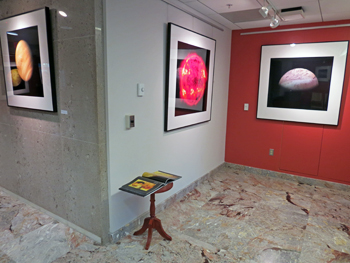 The Embassy of Slovenia is featuring Michael Benson’s photography series “Beyond.”

Lippi, who spoke to us through a translator, smiled at the comparison. “Pollock, ah well, what an honor,” he said. “He was a great painter, certainly, and perhaps, but I cannot say I was inspired by him. I love his work, but I don’t work like him.”

Lippi is of Italian and Argentine heritage, a potentially volatile mixture that seems to have worked its way into his work. “Yes, much passion — it’s about what I feel … who we are. It comes from a bottomless place,” he said. “We are mixtures, explosions. This is what is in the work here.”

He added: “It’s a little like [Walt] Whitman on canvas. We contain worlds, and in his work, you see the inside of everything, the moment — as big as heartbreak, birth, breath — when each and everything began.”

Lippi himself did not begin his career as a painter. “I am a person of the theater. I worked in design in Argentina,” he said.

But art was in his blood. His photographer father “worked in portraits, weddings, things like that, but he had his secret moments when he created art,” Lippi said. “He showed me what he did when I was a boy, and my response was to try and color the negatives. I don’t think he liked that at first, but I think he understood finally.”

That spirit of experimentation now colors Lippi’s canvases. Chief curator Alfredo Ratinoff said that “Big Bang” is a “statement through which he reveals the moment at which everything came to be, in which everything is possible, each suspended in time for us to explore the immensity of his work.” 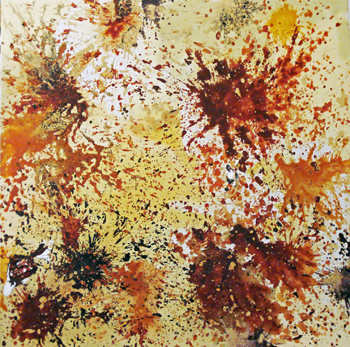 In “Beyond,” mankind’s exploration of everything that happened after the “Big Bang” is the source of Michael Benson’s own explosive works.

Benson has said he operates at “the intersection of art and science,” which is to say that he edits, selects, rearranges and reimages what’s brought back down to earth by unmanned robotic cameras and vehicles sent into outer space.

“All of the images,” he explained, “were produced using raw spacecraft data, which was then assembled and composited using digital processing techniques.”

Benson — who worked on his project in Slovenia for a number of years and whose work has been displayed at the Smithsonian’s National Air and Space Museum — is for sure technically proficient at understanding the raw and immense volume of data he collects. But he also has an artist’s eye, an abstract artist’s eye that produces awe-inspiring images that stretch the frontiers of creation in more ways than one.

A New York Times writer called them “celestial photographs,” and that’s true, in the sense that there is something profoundly magical about them. They depict a realm out of the reaches of mankind. Yet it’s also a realistic realm, one swirling with the fury of the sun, dust on Mars, the colorful gas giant that is Jupiter.

In that way, Benson captures both the real and imagined — just as Lippi imagines a moment none of us could ever witness, but one that gave birth to the reality all around us.