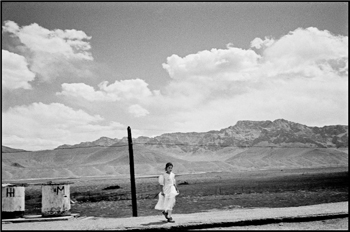 Ivan Sigal’s documentary-style photographs on display at the Corcoran Gallery of Art give an honest, if obscure, glimpse into Central Asia and the former Soviet Union.

A D.C.-based journalist and media trainer, Sigal lived and traveled in Russia, Kazakhstan, Uzbekistan, Tajikistan, Kyrgyzstan and Afghanistan, among other nations, between 1998 and 2005. He used this time, in part, to photograph the unsettled lives of Eurasians in provincial towns and cities. The rest of the time he collaborated with local communities to set up radio and TV stations, create current affairs programming, and train journalists.

Given the harshness of life depicted in Sigal’s grainy black-and-white images, and the seemingly disordered way the images have been arranged on the walls, observers are left to wonder if sojourns through this part of the world would, in fact, be safe — and whether “safe journey” is a euphemism for “good luck.”

Sigal’s project takes us “from encounter to encounter and from place to place, in a destabilized and uncertain time,” wrote curator Paul Roth in a press release.

Our eyes jump from a young woman, incongruently dressed in an ’80s-looking white dress, standing next to what looks like a makeshift bus stop and telephone pole in front of a sea of nothingness, to another image depicting a jumbled mass of people standing behind a prison-looking bar. Another shot shows two dark-skinned girls almost in fear of a large, blonde doll; in other photos, a boy missing an arm glares into the camera, dogs fight in the street, and horses lie dead on the ground from what looks like malnutrition. 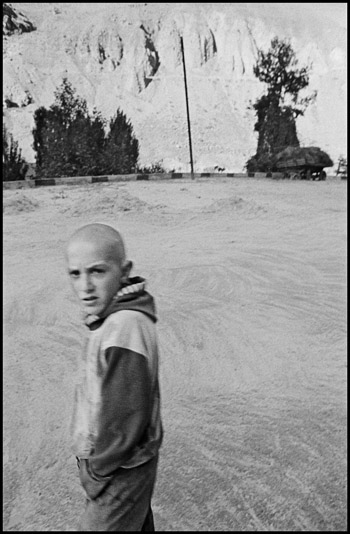 Sigal is clearly a gifted artist who captures a raw perspective through his creative lens, revealing the mood and tempo of a landscape that few Westerners have witnessed. It is a rough, unforgiving landscape, one inhabited by resilient people who have endured political upheaval and economic hardship. Indeed, a central question Sigal seeks to address is, “What was left behind when the Soviet Union’s ideological superstructure was dismantled, eliminating the grand narrative that once imposed meaning on people’s lives?”

Yet the fact that so little information is given about the photos — only country locations and years — is a double-edged sword. On the one hand, the lack of clarity forces onlookers to lose themselves in the people and land and experience Sigal’s wanderings through fresh eyes. On the other hand, it leaves viewers without a compass to navigate intelligently through the exhibit. Those unfamiliar with Central Asia might not recognize that the bearded man in one photo with his tattered, outstretched arm is likely a falconer (who trains falcons to hunt for prey). Or that a pregnant woman in another image standing near a tank with a bucket and a young child is likely there to collect water or milk from the government.

More insight can be gleaned from an accompanying two-volume book of the same title.

But the exhibition’s ambiguity and haphazard organization may be intentional on the part of Sigal, who wanted to make his photographs more allusive than descriptive to convey the enigmas of daily life in this far-reaching region of the world.

“White Road upends the traditional narrative structures used by documentary photographers,” says curator Roth. “Normally we might see photographs from Central Asia illustrating an urgent news account in a magazine, or sequenced to tell a story in an online slideshow. By ordering the images more rhythmically than narratively, however, Sigal is trying to establish a richer, deeper connection between the viewer, his subjects, and himself, so that we start to see the commonality between our experience and those of the people in the photographs.” 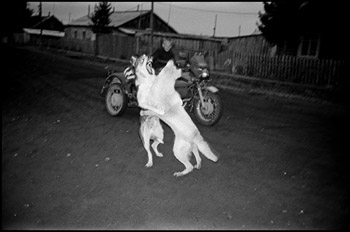 Although deeper knowledge of the subjects might result in even more commonality with the viewers, one does become engrossed in the raw slices of life revealed, and on closer inspection, a subtle pattern of sporadic, rhythmic images of joy emerges. Three sequential snapshots capture men downing shots at a café; another series depicts religious celebrations and a baby’s baptism; while another shows men and boys fishing with nets.

What Roth terms “pictorial echo” is illustrated by a common theme of rudimentary entertainment in the form of amusement park rides, kite running, circus acts and even boys playing on the wing of a bombed-out airplane. The disjointed, restless way the images are presented ultimately speaks to the fractious lives of their subjects.

For better or worse, Sigal does not play it safe, deciding to let the pictures speak for themselves. And, as is often the case in life, his images and the feelings they evoke are mystifying, their meaning as elusive as the roads these nations and people have traversed.