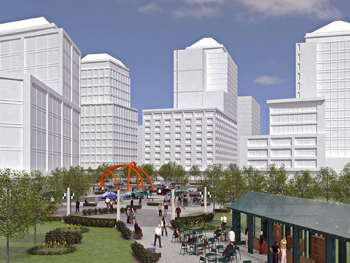 Tysons Corner in Virginia is synonymous with many things these days, few of them positive. There are the Beltway snarls caused by seemingly never-ending construction to accommodate a new Metro line. There is the absolute need for a car, even to go a couple of blocks for lunch. And there’s the facelessness of an urban environment defined by high-rise buildings, two huge shopping malls, offices, thousands of parking spaces, and roads, roads, roads.

Tysons Corner is seen as a place that people come to briefly, for work or some upscale shopping, before heading home to pleasanter places, usually somewhere else.

But Fairfax County wants to change that. The first concrete move toward that change will be the arrival of the Metro Silver Line in Tysons Corner, starting next year. As part of the multibillion-dollar project, four Metro stations, which are set to open in Tysons Corner in the next couple of years, will anchor a wave of development that envisions the population of the area to grow almost five-fold, from about 17,000 today to 100,000 residents by 2050, bringing with it 200,000 jobs.

This rendering shows how Fairfax County wants the future of Tysons Corner to look like: a walkable, green urban center filled not with cars but with pedestrians, Metrorail stations and transit-oriented development.

The goal is to turn the congested, sprawling office and retail park just outside the Beltway into a walkable, green urban center.

In fact, before we go on, we’re overlooking one thing here: It’s not Tysons Corner anymore. It’s just Tysons — unofficially, that is. A new marketing campaign spearheaded by the Tysons Partnership, a nonprofit association that represents Tysons businesses, is aiming to take out the “Corner” and the apostrophe — part of the area’s renaissance.

As Tysons grows from a shopping “corner” into a livable hub, developers and planners in Fairfax County want to turn it into a community where everything is within easy reach without a car. They want to do to Tysons what Montgomery County is doing to the White Flint part of Rockville: transform it from primarily a business and shopping destination to a place where people live, work, shop and play (also see “Extreme Mall Makeover: White Flint Redevelopment Aims to Bring European Style to Suburbia” in the June 2012 issue of The Washington Diplomat).

There have been studies on how to develop Tysons since the mid-1970s, but the changes that are happening now were kick-started in 2004, when the Fairfax County Board of Supervisors appointed a task force to study how to redevelop Tysons Corner, as it was still called then.

Made up of neighborhood representatives, business leaders and developers, the task force looked at everything from parking and housing to drainage, buses and greenery. In June 2010, the task force released a voluminous report on how to transform the 2,000 acres (809.4 hectares) that make up Tysons into a walkable, sustainable, 24-hour urban center “where people live, work and play; where people are engaged with their surroundings; and, where people want to be.”

In fact, county officials have set their sights on rivaling Washington, D.C., as a major U.S. city, citing the presence of Fortune 500 companies in Tysons (nine), abundance of pricey office space and the addition of 20- to 30-story high-rises, some housing corporate heavyweights such as SAIC and Capital One, that dwarf buildings in the height-restricted District.

In an October meeting, Gerald L. Gordon, president and CEO of the Fairfax County Economic Development Authority, even declared: “Fairfax County is now the downtown. D.C. just became our suburb.”

Of course, the idea that the nation’s capital is the suburb of an unincorporated entity that just got its own zip code earlier this year is a bit far-fetched. But in the future, Tysons will be a major economic draw in the region, with plenty of room for businesses and residents.

But community watchdog groups and local officials have made sure that won’t happen. They have worked together to set conditions that dictate, among other things, that the area’s renaissance will follow what’s called transit-oriented development principles. That means high-density population areas will be set around the four Metro stations that will call Tysons their home (75 percent of all development will be within a half-mile walk of a Metro stop).

Transit-oriented development also calls for a lot of mixed-use development “in order to achieve greater sustainability and balance between land use and transportation,” according to the Urban Design Guidelines for Tysons, released earlier this year by Fairfax County’s Office of Community Revitalization and Reinvestment (OCRR). 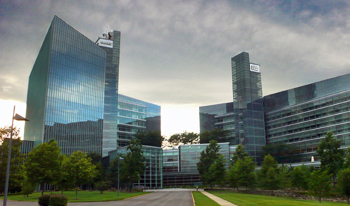 The Gannet/USA Today headquarters in McLean, Va., is among the various corporate buildings and offices that have sprouted up in Tysons Corner over the last few decades.

To that end, county officials are looking at proposals for how to fund more than $2 billion in transportation improvements, and they’re eyeing landowners and developers to shoulder about $1 billion of the costs, including new road projects and street grids inside Tysons. The rest of the money would come from taxes on commercial landowners and county residents, as well as the state and federal governments.

Planners and experts say the challenge of redesigning Tysons’ sprawling layout into a more urban-oriented street grid is a daunting one. “To avoid building something resembling a monster Crystal City, officials and landowners also must provide for a street grid of small blocks, which will add to their cost,” wrote Jonathan O’Connell in a 2011 article for the Washington Post. “This will mean that the original developers of Tysons will need to rip up lots and buildings they painstakingly designed for a car culture a generation ago.”

But the point is to do away with the car culture that has shaped Tysons for the last 50 years. In the grand scheme of things, the plan also sets aside certain patches of land that must be turned into parkland, and cites lofty ambitions for doing so.

Fairfax County also plans to plant up to 20,000 trees in Tysons, as part of a broader strategy to increase the overall tree canopy in the county by 2037. Each new development in Tysons would be required to have 10 percent tree canopy coverage.

In pushing for a more natural environment, Tysons is in a sense going back to its roots. In the 1950s, the area was a sleepy, rural outpost, where farms surrounded a general store at the intersection of Routes 7 and 123. In the 1960s, with the construction of the Capital Beltway, Dulles, the CIA headquarters and the Tysons Corner Center shopping mall, farmland gave way to asphalt.

The next phase of Tysons’ evolution would see the parking lots give way to tree-lined sidewalks, bike lanes and gleaming, mixed-use high-rises in place of the rundown strip malls and car dealerships that dot the current landscape.

The vision Fairfax County has for Tysons recalls Joni Mitchell’s hit song “Big Yellow Taxi” — but with the lyrics reversed. Mitchell sang about how “they paved paradise to put up a parking lot” and “took all the trees and put ’em in a tree museum” before charging folks a dollar to see them.

If the vision for Tysons is realized, in 38 years, “Big Yellow Taxi” will have to be rewritten and re-released.