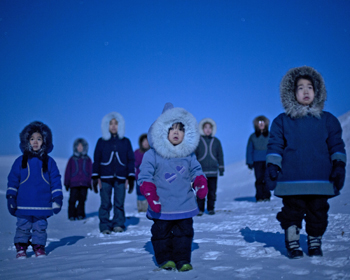 “Full Moon, February” by Acacia Johnson depict the harsh vastness yet sense of community that resides in the Canadian Arctic.

Visitors entering “Under the Same Stars,” a photo exhibit at the Embassy of Canada, will be struck by a gradient of colors that transports them to an austere yet entrancing world. The photos on the left wall of the gallery are somber, dark and muted. As one moves to the right, however, the colors become brighter and more intense — a blood-red dump fire here, a glowing igloo there — culminating in a final splash of neon pink in the heart-shaped glasses worn by two young girls.

Acacia Johnson, the photographer behind the exhibit, explained that the arrangement was intentional.

“I structured the exhibit in a conceptual way that reflects the natural elements of the Arctic landscape where the photos were taken,” Johnson told The Washington Diplomat. “The photos on one wall are all about the sun and fire, and the ones on the other focus on the moon, ice and darkness.”

The focus on natural elements speaks to the underlying theme of the exhibit: the connection between the Canadian Arctic people and the wintery landscapes that surround them.

Johnson, who received her bachelor’s degree in photography from the Rhode Island School of Design (RISD) in 2014, shot the exhibit over four months while living on Baffin Island in northern Canada. She completed the project with the help of a Fulbright Canada grant.

The Anchorage, Alaska, native said she developed a fascination with cold northern landscapes as a high school exchange student in Norway.

“I remember I spent that winter above the Arctic Circle,” Johnson said fondly of her experience. “The combination of learning passionately about photography while spending a winter in the dark laid the foundation for my later work.”

She added: “I don’t know why I feel so connected to these harsh northern climates, but that’s just where I feel the most alive and where I feel I belong.”

“Under the Same Stars” consists of 12 photographs that Johnson took during her Fulbright-funded stay in the Canadian Arctic. The images were shot in color with a large-format view camera and depict scenes of daily life in the Arctic as well as the various ways in which the indigenous Inuit people interact with their environment.

Many of the photos examine the importance of the sun and the moon in the Inuit people’s lives. One, titled “Driving Into Night (The Last Time We Saw the Sun),” depicts a man driving a snowmobile across a vast stretch of ice toward a speck of sun on the horizon. Another, “Dreaming (In Which the Sun Appears),” shows a man gazing at the camera, seemingly lost in stunned bewilderment as the sun rises behind him for the first time in three months.

The symmetry of the two photos, one in which the sun is viewed for the last time before it disappears and the other in which the sun resurfaces, has deeper parallels. “The photo ‘Driving Into Night’ speaks to me about moving forward — into light, through inevitable darkness, and into light again on the other side,” Johnson explained. “It’s all a cycle. This photo, along with ‘Dreaming,’ illustrates the beginning and ending of these light cycles, suggesting the cycles of time itself.”

The images also capture an inherent yearning for the sun. “The photo ‘Dreaming’ expresses the idea of dreaming of the sun, longing for it, in the time before it reappears,” said Johnson.

Conversely, during the sun’s absence, the moon becomes a critical alternative source of light. “Full Moon, February,” which portrays a group of children in hooded parkas standing in the snow and gazing up at the moon, illustrates the importance of this cosmic body as a kind of surrogate sun during the dark Arctic winter.

“This is a portrait of a family I’m very close to, out in the mountains at night to enjoy the light of the full moon,” said Johnson, adding that the parkas worn by the children were all hand-sewn by the women in the family. 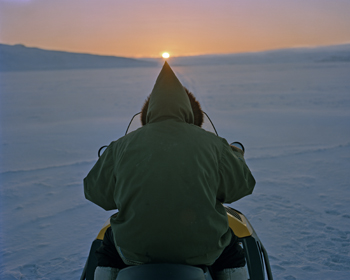 “Driving Into Night (The Last Time We Saw the Sun)”

Other photos depict the surreal, almost otherworldly, landscape of the frozen Arctic tundra. “Found Objects,” for example, shows an eerie disk-like object that is in fact a discarded piece of bloodied sealskin.

“It reminded me of something celestial, something out of this world,” Johnson said.

The reverential treatment Johnson gives the sealskin mirrors its value to Inuit society. “Seals have an immeasurable importance to the Inuit peoples across the entire circumpolar North,” she said, noting the dependence of the region’s hunters on warm sealskin clothing.


Still other images explore contrasting ideas of shelter, which range from a traditional igloo to a row of modern cabin-like houses. What Johnson really wants to accomplish with the exhibit, however, is to show that life in the Arctic overflows with incredible warmth.

“I wanted to give people a glimpse into the richness and vibrancy of life in the Arctic, even in the winter,” said Johnson, adding that contrary to popular opinion, the Arctic is not a “barren wasteland” but a “celebration” of life and community.

“I wanted to show that life in the northern wilderness could be a really rich and peaceful way to live, and not necessarily one that’s imbued with struggle.”

The normality of daily life in the Arctic is conveyed in images such as “Friday Night Dance,” which features two girls wearing neon pink glasses at a community hall dance.

“I feel this image says a lot about the lives of young people in the Arctic these days — very in tune with the interests and lifestyles of big cities to the ‘south,’ modern in many ways, but amidst … traditional ways of life,” Johnson said. “It’s an interesting and complex world these young people live in — connected to the rest of the world, but nevertheless separated from it.”

Johnson pointed out that while some people might view Arctic communities as primitive and isolated, the local people are technologically connected and savvy, communicating through popular social media sites like Facebook.

In fact, Johnson became acquainted with the family whose children posed for “Full Moon” through a Facebook advertisement she posted. The photographer noted that “Full Moon” is the photo that best captures the exhibit’s central theme of community and togetherness through a shared interaction with nature.

“To me, this image illustrates the title of the show, the idea of ‘Under the Same Stars,’” Johnson said. “Across the circumpolar North, we may come from different cultural backgrounds and different life experiences, but the way we engage with the landscape overlaps in many ways. It ties us together.”

Under the Same Stars