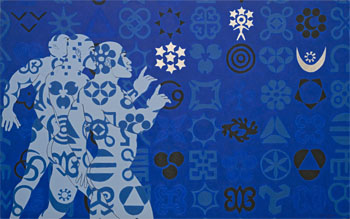 “African Cosmos: Stellar Arts,” an eclectic mix of some 100 objects, spanning from antiquity to modern day and encompassing the length and breadth of the continent, examines man’s timeless relationship with such heavenly phenomena like the earth, sky, sun, moon and stars as well as lightning and rainbows.

On display at the National Museum of African Art, “African Cosmos” is the first major exhibit to explore the historical legacy of African cultural astronomy and its intersection with traditional and contemporary African art.

The exhibition, “many years in the making, is part of the museum’s series focusing on Africa’s contributions to the history of knowledge — in this case, knowledge about the heavens and how this knowledge informs the creation of spectacular works of art,” said Christine Mullen Kreamer, deputy director and chief curator of the museum. “The project connects my lifelong fascination with sky-watching to the arts and cultures of Africa,” she added.

From ancient Egyptian papyrus drawings, to ritual items and masks from Mali, Nigeria and the Democratic Republic of the Congo, to multi-media digital displays, the objects reveal how Africans throughout the ages related to the universe. 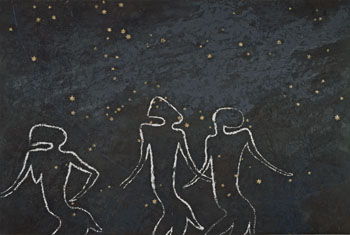 Among other examples, the exhibit makes note of this historical relationship by referencing Nabta Playa, a location near the border between Egypt and the Sudan on the edge of the Sahara Desert. Built a thousand years before Stonehenge in England, Nabta Playa’s stone circles and sundials were used to mark the summer solstice more than 6,000 years ago.

Visitors to the exhibit hall are simultaneously greeted by a mummy board, decorated with the ancient Egyptian goddess of the sky, Nut, from approximately 1,000 B.C., that is sandwiched between electronic simulations of airplanes taking off with images captured by Google Earth.

Also from ancient Egypt is a tablet depicting the star Sirius, whose sighting indicated the yearly flooding of the Nile River and the beginning of the rainy season necessary for farming.

Looming large in the center of the hall is a circular and colorful sculpture made from repurposed jerry cans titled “Rainbow Serpent” by Benin artist Romuald Hazoumè. For the Fon and Yoruba people of Benin and Nigeria, the rainbow serpent is a powerful symbol. The piece is meant to address contemporary global concerns like the exploitation of natural resources and environmental pollution. But Hazoumè has described its meaning more optimistically as “one day the good weather will come again.”

Another contemporary work is an interactive sculpture by South African artist Karel Nel called “Trembling Field,” a carbon silicate work that focuses on exploring the ephemeral qualities of light as it diminishes into the far expanses of outer space. 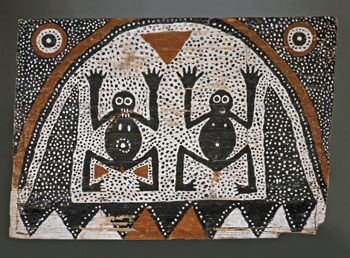 One of the exhibition’s featured artists, Nel’s work explores a long-standing engagement with science, the history of art and the human journey. In 2004, he was invited to participate as an artist-in-residence at the California Institute of Technology’s Cosmic Evolution Survey (COSMOS), an astronomy project that is mapping a two-degree square area of the sky.

“Art and science have both questioned the nature of reality for centuries, in their own ways,” said Nel, who is also an associate professor of fine arts at the University of the Witwatersrand in Johannesburg.

Major sponsorship for the exhibition was provided by the South African government and the country’s Department of Science and Technology. South Africa has a long history with astronomy; the first permanent observatory in the southern hemisphere was built in Cape Town in 1820. In addition, the exhibition comes on the heels of the recent Square Kilometre Array (SKA) decision, a huge radio telescope project, with South Africa playing a major role in its development.

Of the exhibition, Rasool said, “This is what Africa is capable of — a delicious combination of art and science. It has shaped the African personality and Africans’ understanding of themselves, their fellow human beings and the Earth.”