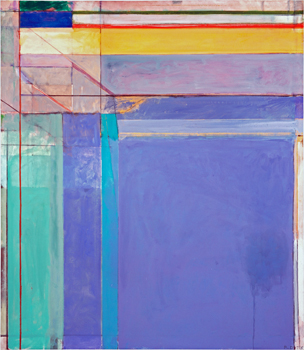 Three popular art museums around D.C. are collaborating on a three-artist retrospective that celebrates the achievements of the “Modern American Genius.”

Throughout the summer, the cutting-edge contributions to the art world of Richard Diebenkorn, Jasper Johns and Barnett Newman will be on display at the Corcoran Gallery of Art, the Phillips Collection and the National Gallery of Art, respectively. Each museum will be hosting an exhibition dedicated to a seminal body of work from one of these major trailblazers, each of whom helped to elevate the stature of modern American art on the international stage.

Day at the Beach

The Corcoran Gallery of Art’s exhibition of nearly 80 works by Richard Diebenkorn marks the first time a major museum will focus on the painter’s pivotal “Ocean Park” series, named for the beachside community in Santa Monica where the works were created.

“It is a rare and unique opportunity to bring to a broader audience this well-known yet under-exhibited body of work,” said curator Sarah C. Bancroft.

Included in the exhibition are large-scale paintings, smaller paintings on cigar-box lids and mixed-media drawings on paper, monotypes and prints. Together they offer insights into the various media that Diebenkorn used when creating the series from 1967 to 1988 — often considered one of the most important bodies of work in American abstract painting. Located on the top floor of the museum, the grid-like works of largely deep blues and greens are soothingly complemented by the light and airy space of the Corcoran, which will be the only East Coast stop for the retrospective.

The series also examines Diebenkorn’s artistic process, revealing scraped layers of paint and color and imperfect lines that invite introspection. Beyond the thought-provoking abstraction of his works, Diebenkorn’s Ocean Park series, with its breezy pastel hues, is reminiscent of a lazy, sun-drenched day at the beach, specifically the California coastline that served as the artist’s inspiration.

Born in 1922 in Portland, Oregon, Diebenkorn grew up in San Francisco. A former U.S. Marine, he studied art at the California School of Fine Arts, the University of Illinois and the University of New Mexico. After emerging as a leader of the Bay Area Figurative Movement in the mid-1950s, he relocated to Santa Monica in 1966 for a teaching position at UCLA. It is here that he would create his seminal body of work of more than 140 paintings and drawings, shifting away from his earlier figurative style and his focus on still lifes and landscapes that had earned him acclaim. Diebenkorn died at the age of 70 in 1993.

“These works are powerful investigations of space, light, composition and the fundamental principles of modern abstraction, bringing together concepts forged by artists like Henri Matisse and Pablo Picasso,” said Philip Brookman, chief curator and head of research at the Corcoran and coordinating curator for the exhibition. “Diebenkorn investigated the tension between the real world and his own interior landscape to produce some of the most innovative, influential and timeless works of art during this decisive period of his career.” 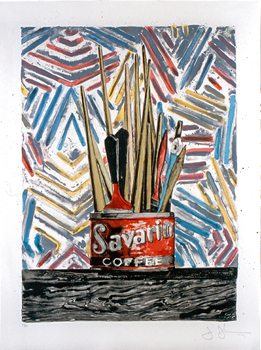 “Jasper Johns: Variations on a Theme” at the Phillips Collection marks the first time that the Dupont Circle museum is hosting a show dedicated to the legendary artist and printmaker.

Born in Georgia in 1930, Johns’s work has been represented in nearly every major museum collection and featured in one-man exhibitions around the world. He was awarded the Presidential Medal of Freedom last year and continues to live and work in Sharon, Conn., and the Caribbean island of St. Martin.

“Jasper Johns’s persistent experimentation not only transformed printmaking but set the standard for contemporary art,” said Dorothy Kosinski, director of the Phillips Collection.

As the exhibition title suggests, “Variations” encapsulates Johns’s fascination with process and constructing variations on a single motif — a style that meshed well with printmaking.

Showcasing some 100 examples of Johns’s work mostly in lithography but also intaglio, silkscreen and lead relief, as well as painting, sculpture and drawing, “Variations on a Theme” spans five decades — from the 1960s through 2011 — highlighting the artist’s evolving interests and fascination with familiar symbols like targets, flags, numbers, maps, newsprint and even his own studio.

Johns had used many of these symbols in his drawings and paintings before incorporating them into his printmaking in the late 1950s. 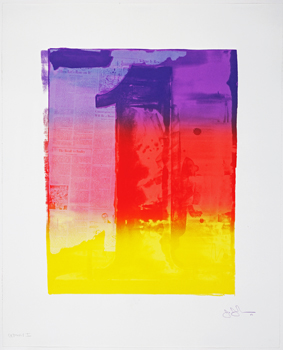 Johns once explained, “Using the design of the American flag took care of a great deal for me because I didn’t have to design it. So I went on to similar things like the targets — things the mind already knows.”

Another iconic symbol that is hard to miss in the exhibition is Johns’s classic rendering of a Savarin coffee can holding paintbrushes. Other striking works are a lead relief of a slice of bread and the Phillips own “The Critic Sees,” both eclectic examples of Johns’s experimentation.

“Variations” also includes a room with lithography and etching presses, lithographic stones and metal plates to explain Johns’s printmaking process and the techniques he used to layer, repeat, rework and weave together the different elements in his collages and other pieces.

But perhaps the best guide for understanding the work are Johns’s own words: “What interests me is that something can be seen in two different ways and the question whether seeing it one way necessarily obliterates seeing it the other way. Or whether it’s possible to see both at once.”

Jasper Johns: Variations on a Theme

The National Gallery of Art draws largely from its own collection in presenting its 26-piece exhibition of the abstract expressionist painter Barnett Newman. The fifth “In the Tower” show, located in the I.M. Pei-designed tower of the gallery, focuses mostly on the artist’s renowned “Stations of the Cross” series created between 1958 and 1966.

A cycle of 15 paintings, “The Stations of the Cross” is often considered to be Newman’s greatest artistic achievement. 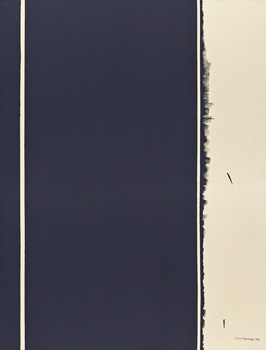 Newman, born in New York in 1905, had an existential crisis of sorts early in his artistic career, destroying all his paintings from the 1930s and early 1940s in the belief that early 20th-century painting styles were obsolete. Instead, he founded the Subjects of the Artist school in 1948 to explore ideas and methods for abstract expressionism. His first solo exhibitions in the early 1950s were not well received, but by the end of the decade, he had earned the recognition and praise of his peers.

Newman began painting “The Stations of the Cross” series in 1958 after recovering from a heart attack. Forgoing color for black and white and utilizing stark, sparse lines down that “zip” down his canvas, he had described the series as an attempt to address the “moral crisis” facing artists after the atrocities of World War II and the Holocaust. Newman said that through these paintings, he hoped to capture Jesus’s cry from the cross to God, posed as a question, in dread and confusion: “Why have you forsaken me?”

“This is the Passion,” Newman, who died in 1970, once said. “This outcry of Jesus. Not the terrible walk up the Via Dolorosa, but the question that has no answer.” Nor does it belong to any one narrative, he further explained, but rather is an expression “of each man’s agony.”

In the Tower: Barnett Newman

through Feb. 24
National Gallery of Art
on the National Mall between 3rd and 9th Streets at Constitution Avenue, NW
For more information, please call (202) 737-4215 or visit www.nga.gov.