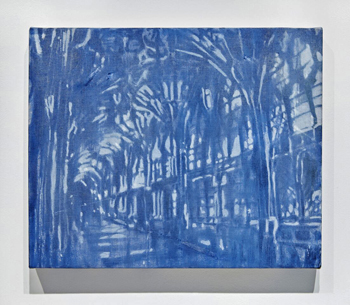 Photos: Courtesy of the Artist and Cristin Tierney Gallery

Chilean artist Jorge Tacla’s “Hidden Identities” is a series of paintings, created with oil and cold wax on canvas, that depicts damaged buildings and human victims.

Fans of Alain Resnais’s 1959 classic film “Hiroshima Mon Amour” will remember the movie’s famous opening sequence in which the bodies of two lovers embrace while apparently covered in a grainy layer of dust and ashes, evoking the image of human corpses lying under the rubble of a collapsed building.

This opening scene perfectly captures the essence of Chilean artist Jorge Tacla’s “Hidden Identities” exhibit, both in its surreal and slightly nebulous imagery and in its use of human bodies to explore the themes of trauma and memory.

Much like Resnais’s film, “Hidden Identities” explores the aftermath of man-made catastrophes and their impact on the collective psyche. The exhibit consists of 41 paintings, created with oil and cold wax on canvas, depicting damaged buildings and human victims. The series also includes a collection of 66 pencil sketches, done on plain notebook paper, that reflect the themes of the exhibit in a more abstract and conceptual way.

Tacla told The Washington Diplomat that he first began to work on the series in 2005, and that the number of works in the exhibit has grown significantly over the past decade. Perhaps as a tribute to the anonymity of mass catastrophe victims, the individual paintings have no titles but are simply denoted with a number.

The artist, who was born in Chile and lives and works in both Santiago and New York, has witnessed at least two major man-made crises during his lifetime. The first occurred on Sept. 11, 1973, when military revolutionaries bombed the Palacio de la Moneda in Santiago and ousted Chile’s socialist, democratically elected president, Salvador Allende. Exactly 28 years later, Tacla again witnessed the depth of human depravity in the Sept. 11 terrorist attacks on the World Trade Center in New York.

Many of the paintings in his exhibit are modeled on his personal photographs of the catastrophes he witnessed as well as media images of similar events.

In a blog posting, Tacla explained that the 1973 coup d’état in Chile made him appreciate the tenuousness of man-made structures.

“When the Palacio de la Moneda was hit, it was the first time I realized that man-made constructions could be so fragile,” he said. “The presidential palace was a symbol of state power and government and after that moment, I realized even those great institutions were immensely fragile.”

Although the premise behind “Hidden Identities” was inspired by Tacla’s personal experiences, the artist explained that the central themes of the exhibit could apply to any global man-made calamity. 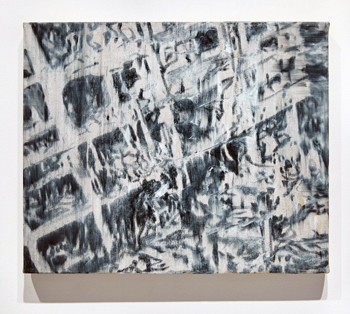 “My works deal with recent and historical events and permanently seek the nucleus of a determined crisis such as the current civil war in Syria, the Gaza conflict, the Beirut bombing in 2006, the Oklahoma City terror attack in 1995, among so many others,” he told The Diplomat.

Tacla said that the damaged buildings he depicts are meant to represent human bodies.

“Once buildings have been struck, they are no longer rigid cement structures; they become more organic and thus they are more similar to the human body,” he wrote in his blog post. “When the building opens up because of a catastrophe, its internal biology is exposed. Its bursting tubes and poles resemble the human body with its veins, muscles and bones.”

He added that the resemblance of the collapsed buildings to human corpses highlights a deeper connection between physical and psychic damage.

“In my work, memory and human skin react in the same way once it is affected by trauma,” he said. “If you are punched, your skin bruises, it is marked. Memory develops those sequels as well. The marks on memory are what interest me, because they are also the marks which lead to the unhinging of human beings.”

Tacla attempts to capture these psychological reverberations in a series of notebook drawings that contain highly abstract diagrams labeled with words and short phrases, including a particularly striking depiction of what appears to be a human body subjected to chemical radiation accompanied by the sentence: “It is all just chemicals.”

Another central element in Tacla’s work is the relationship between the victims and perpetrators of man-made tragedies.

“The general concept behind ‘Hidden Identities’ refers to the relationship between the victim and the aggressor, from the most intimate dimension to the most global one,” he told The Diplomat. 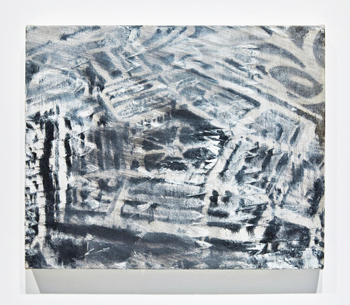 He said that the act of perpetrating a mass catastrophe is one that permanently alters the identity of both victim and aggressor. Disaster victims tend to lose their individual identities and become mere statistics, while the horrific nature of murder causes perpetrators to become alienated from their own identities.

Tacla highlighted one painting in particular of a bed in a rubble-strewn room as an example of illustrating the complex victim-perpetrator dynamic.

“It represents the most intimate moment between the aggressor and the victim,” he said. “It also represents the relationship between pain and pleasure.”

All of these hidden themes tie together into one grand, overarching purpose: to denounce human rights atrocities and commemorate their victims. Art, Tacla says, is a particularly effective medium to highlight these atrocities because of its power to endure.

“The contemplative space of art plays an essential role in society,” he said. “Once you read the newspaper you throw it into the garbage, but art stays. You have Picasso’s ‘Guernica,’ for example. Years after the end of the Spanish Civil War, it continues to remind us of those who suffered during the attack of this city.”