Home The Washington Diplomat December 2014 High-Speed Rail: Everyone’s All Aboard, Except America 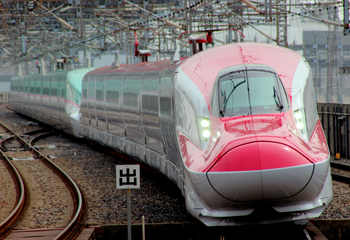 American politicians rarely miss an opportunity to assert that the United States is the world’s leading nation. Some, like Joni Ernst, an Iowa Republican who won election to the Senate in November, take American exceptionalism to another level. “This is the greatest nation in the history of mankind,” she said on election night.

But there is at least one sphere where not even Ernst and other patriots can claim American dominance: high-speed rail. Fifty years after Japan introduced the world’s first bullet train, a multitude of countries around the world are investing in high-speed rail, while progress in the United States has stalled.

In the ’50s and ’60s, while Japan and some Western European nations invested billions in upgrading their rail infrastructure, the U.S. chose to let the nation’s rail system wither while investing billions to develop the nation’s interstate highway system and to upgrade aviation facilities and infrastructure. In 1964, the year the Japanese Shinkansen high-speed train opened, American automakers led the world, gas cost 25 cents a gallon and millions moved to the suburbs after World War II, when America’s car culture began to take root.

Today, intercity passenger rail travel is practically irrelevant as a transportation option for most Americans. According to Tom Zoellner, an associate professor of English at Chapman University and the author of “Train: Riding the Rails That Created the Modern World,” 98 percent of Americans have never been on an intercity train ride. Prior to World War II, rail travel was wildly popular and travelers had myriad options for where they could go and how they could get there, with everything from basic carriages to opulent sleeping cars.

While at least 15 nations now have high-speed rail (generally defined as trains that go at least 130 miles per hour or more in some parts of the world and 186 mph or more in others), the U.S. still doesn’t have it. (Amtrak’s Acela can reach speeds of up to 150 mph, but doesn’t qualify as true high-speed rail because the average speed is just 68 mph.) And many perceive Amtrak, America’s rail carrier, as expensive, inefficient and extremely limited in terms of the services and routes it offers.

“If all you saw of America was riding around on Amtrak, you would think you were in a third world country,” said Andy Kunz, president and CEO of the U.S. High Speed Rail Association (USHSR). “We haven’t invested in rail for 70 years, so the rails are falling apart, the stations are ancient, the food is horrible. But if you move around through our airport system, we look like a leading country. It’s two different worlds. Millions more would ride trains if we had decent options.”

Some are skeptical that America will ever have a true high-speed rail network, or even a more extensive, higher-quality, traditional rail network, but others think that the time is right to revisit the high-speed rail debate. Gas prices have abated in recent months, but they still remain a concern for most Americans. Traffic congestion and environmental concerns are a major issue for many. And Americans have never been more dissatisfied with airline travel. A survey released by the U.S. Travel Association in June revealed that Americans avoided taking 38 million trips, costing the U.S. economy $35 billion in 2013, because of the well-publicized headaches associated with air travel.

These and other factors have led a host of nations, including some you might not expect, to invest or consider investing in high-speed rail. China is building a number of high-speed lines and in 2015 will complete the world’s longest: the 1,390-mile Beijing-Guangzhou-Shenzhen-Hong Kong High Speed Railway, which will whisk travelers from Hong Kong to Guangzhou in just 50 minutes. Turkey recently opened a high-speed link between Ankara and Istanbul that cost $4 billion and is reportedly looking into expanding high-speed services. A high-speed service between Saudi Arabia’s holy cities of Mecca and Medina will open in December 2015. South Korea will also introduce new high-speed service in 2015 that will cut travel time between Seoul and Busan, the country’s second-largest city, to just 90 minutes, from two hours and 40 minutes.

And the traditional high-speed rail powerhouse countries like Japan, France, Spain and Italy are also launching newer, faster and more environmentally sound services. In Italy, the new Frecciarossa 1000 service will make the run between Rome and Milan in just two hours and 20 minutes. These trains will reach speeds of up to 400 kilometers per hour (250 mph) and have won rave reviews in test runs for being eco-friendly and eerily silent. Eurostar has recently expanded its popular service that shuttles travelers from London to Paris in just two hours and 15 minutes, while Spain and France have introduced new high-speed lines and Germany has high-speed services that link 32 cities.

A host of other countries, including Mexico, Brazil, India, Russia, Argentina, the Netherlands, Taiwan, the United Kingdom and Belgium, are in various stages of developing or considering new high-speed rail services or expanding existing ones. And a group of U.S. investors, with support from several noteworthy American politicians and a $5 billion commitment from the Japanese government, is trying to introduce a $100 billion high-speed Maglev train that would jet passengers from New York to Washington, D.C., in an hour. But critics call it a pipedream and even the USHSR, a proponent of high-speed rail, opposes the project.

Zoellner says the United States should focus on introducing traditional, high-speed rail on airline routes with flight times of about one to three hours. 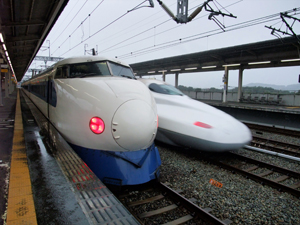 American automakers led the world and gas cost 25 cents a gallon in 1964, the year the Japanese Shinkansen high-speed train, above, opened, and ever since, the U.S. has focused on investing in highways while Japan and Western European nations invested billions in upgrading their rail infrastructure.

“From a climate change perspective, the short-haul flights are the most damaging because take off and landing is where you burn the most fuel,” he said. “The way to get the most bang for the buck is focusing on the short haul. A good way to gauge feasibility is to look at a list of the busiest short-haul air corridors and work your way down through those.”

Zoellner thinks that high-speed rail makes the most sense in the New York-Washington and San Francisco-Los Angeles corridors. Despite myriad legal challenges, it looks like the California corridor will get high-speed service, eventually, though it will likely take a decade or more depending on the political winds.

“When it [the San Francisco-Los Angeles line] opens, there will be tremendous excitement and envy,” said Zoellner, who is based in Los Angeles. “Once Americans see how flexible and how convenient and inspiring this is, it’ll touch off a boom of high-speed rail construction. You’ll see routes like Dallas-Houston, Chicago-Minneapolis, Boston-New York.”

Kunz predicts that the privately financed Dallas-Houston high-speed line will open sooner than the coastal corridors, making it the country’s first true high-speed rail line. He says that the outlook for high-speed rail in the United States has never been brighter. But Randal O’Toole, a senior fellow at the CATO Institute and a leading rail skeptic, disagrees.

“Right now, there is zero momentum for high-speed rail outside of California,” he said in an email. “I don’t think California can put together a financial package capable of building a true high-speed rail line, so it will either settle for second-best or give up entirely. A second-best system won’t attract many new travelers, so it won’t change the momentum elsewhere in the country.”

O’Toole says that when the energy cost of constructing new high-speed lines is counted, even the most energy-efficient trains won’t be as energy-efficient as driving the average car in 10 years. He believes that even privately financed ventures like the Dallas-Houston line will eventually end up costing taxpayers.

“I’d be all in favor of trains if people’s own fares paid for them,” he said. “I like trains too, but would you rather take a train over a bus if the train cost $158 and the bus cost $10? Fares on Amtrak’s Acela from New York to Washington start at $158 while Megabus offers the same trip for as little as $1.50.”

Even rail enthusiasts admit that America’s geography and car culture make building a viable high-speed rail network more challenging compared to most of the countries that already have it. One might look to China as a reasonable comparison, but as Megan McArdle pointed out in a 2010 piece for The Atlantic, China’s largest cities are much more closely clustered than America’s. Moreover, “the Chinese government does not have to worry unduly about things like environmental impact and acquiring the right of way,” she wrote, referring to the straight path often needed to build high-speed rail. Clearing that path would require uprooting existing transport networks and “would mean approximately a century of court battles with homeowners, environmental groups … and sundry others.”

Zoellner says that critics are right to be scrutinizing proposed high-speed rail projects.

“I’m a rail proponent, but even I don’t think every rail line should be built,” he said. “The history of railroad construction around the world is pockmarked with many instances of corruption. But I do wish the critics wouldn’t be so dogmatic that they’re allergic to any project that has tracks because the fact is that rail is a proven, popular method of transportation.”

O’Toole says he’s not opposed to all projects, so long as they pay for themselves, but contends that just because people are frustrated with airline travel, that doesn’t automatically make high-speed rail a viable alternative.

Time will tell if that’s true but for anyone who has traveled to countries with first-rate rail service and been seduced by the comfort and romance of riding the rails, train travel is worth the extra time and money.

“From a shear enjoyment perspective, there is no question a train ride beats a plane or automobile trip,” Zoellner said. “There are all kinds of emotional reasons: the unparalleled views of the landscape, the opportunity to interact with other passengers and the completely relaxing, if not hypnotic environment on board.”