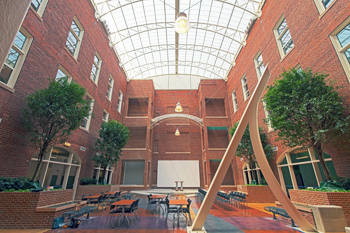 Eastern High School was re-inaugurated in August 2010 after a $77 million modernization, part of an unprecedented 15-year, $3.5 billion capital campaign to transform D.C. schools that in many cases had not seen any concerted rehabilitation efforts in a generation.

Cardozo Senior High School cuts an imposing figure, a hulking structure that overlooks Washington, D.C., from its perch between Florida Avenue and Clifton Street, NW, in the Columbia Heights neighborhood.

Originally built as Central High School in 1916 and intended for use by white students in the city’s segregated school system, architect William Ittner designed the building in a Collegiate Gothic style, with limestone trim and tile work juxtaposed against the dark red bricks used for the majority of the construction.

According to observers at the time, Ittner “conceived the modern school as a splendid civic monument, to become a potent factor in the academic development of the community.” The building was added to the National Register of Historic Places in 1993.

But like many of D.C.’s public schools, over the years Cardozo suffered from neglect that was both academic and physical.

In 1998, the U.S. Army Corps of Engineers reported that 70 percent of the facilities under D.C. Public Schools “were in poor physical condition.” A 2005 report by the Washington Lawyers’ Committee for Civil Rights and Urban Affairs called the physical state of the city’s schools “deplorable,” detailing conditions that “most people associate with slums.”

By 2007, city officials reported a backlog of 20,000 work orders, hinting at a system that wasn’t just sinking, but failing to do even the most basic repairs to stay afloat. The same year, Cardozo was declared a “failing school.”

But this September, D.C. Mayor Vincent Gray proudly announced that Cardozo would undergo a year-and-a-half-long modernization. When the school reopens in 2013, it will feature a brand new 24,000-square-foot gymnasium, renovated classrooms, improved technological capacity, and new windows, doors and exterior treatments. It will, many hope, become the splendid civic monument Ittner conceived it to be.

The new Cardozo will be but a small part of an ambitious plan to renovate, rehabilitate, modernize and, in some cases, replace the 123 D.C. Public Schools facilities that serve the system’s 45,000 students but have suffered severe institutional decay that has built up over decades.

In fact, years before President Barack Obama’s current jobs proposal to rehabilitate aging school buildings across the nation as a way to stimulate the U.S. economy, the nation’s capital began a major drive to radically overhaul its own troubled public school system.

In 2007, then Mayor Adrian Fenty engineered legislation that granted him almost absolute control of school governance and established the Office of Public Education Facilities Modernization (OPEFM), an independent agency that would lead the charge in fixing public schools across the District’s eight wards.

Under the leadership of former Executive Director Allen Lew — who called the state of the city’s schools a “monumental calamity” — OPEFM was tasked with spearheading an unprecedented 15-year, $3.5 billion capital campaign to attend to schools that in many cases had not seen any concerted rehabilitation efforts in a generation. Just as former D.C. Schools Chancellor Michelle Rhee famously fought her way to improve academic standards, Lew — former chief executive of the D.C. Sports and Entertainment Commission — took to creating the buildings in which teachers could better educate and students could better learn.

“We knew that a piecemeal approach drawn out over a long period of time would be doomed to repeat the failures of the past. We needed a new concept, massive funding and a ‘get it done’ attitude to save our school facilities,” Fenty said at the time.

By many measures, the results to date have been impressive. According to OPEFM, from 2007 to 2010, 13 schools and 33 athletic fields and playgrounds were fully modernized. (For 2011, 11 more schools were set to be overhauled.) Twelve schools had roofs replaced, 16 received major repairs to heating systems, 75 underwent significant plumbing work, 35 had electrical work done, and more than 9,000 work orders for health code violations were completed.

In addition to badly needed repairs and fixes, the modernization project aims to do just that — modernize D.C. schools to compete for the 21st century. That includes state-of-the-art technology, brand new academic and athletic facilities, and a major focus on eco-friendly building design, from dual-flush toilets that save water to white roofs that reflect heat to underground geothermal heating and cooling systems.

“Our goal in modernizing public schools in the District of Columbia is not only to transform classrooms and campuses across the District to provide students with facilities that can positively impact student achievement,” said Ollie Harper Jr., acting executive director of OPEFM. “Our goal is also to transform schools into state-of-the-art campuses that can serve teachers, staff, students and their communities.”

By 2010, the turnaround was such that the Washington Lawyers’ Committee said that “the state of DCPS facilities has dramatically improved over the past five years.”

Eastern High School, long known as “the pride of Capitol Hill,” was re-inaugurated in August 2010 after a $77 million modernization that included a rehabilitation of the school’s grand performance theater.

H.D. Woodson High School, above, was rebuilt from the ground up as part of a $102 million campaign. From 2007 to 2010, the D.C. Office of Public Education Facilities Modernization has fully modernized 13 schools and 33 athletic fields and playgrounds, with 11 more schools set to be overhauled in 2011.

H.D. Woodson High School, located in the northeastern neighborhood of Marshall Heights, was once an imposing eight-story, 1960s-era concrete building, but as part of a $102 million modernization, it was demolished and rebuilt from the ground up. It was inaugurated in August 2011.

At the reopening of the school, originally built in 1935, Mayor Gray said, “The ribbon-cutting ceremony for Woodrow Wilson High School is a shining example of how the District of Columbia can transform a historic campus into a first-class facility with an extraordinary design and state-of-the-art technology.”

According to Lew, who is now the city administrator, “What made Wilson an exciting project was the fact that this modernization involved the renovation and adaptive reuse of all of the existing landmarked structures through a complete renovation of all existing program space and the conversion of substantially underutilized existing space into program or support space,” he said at the reopening. “The next step was to then take the existing Wilson and strategically insert new construction to take the campus to the next level.”

While prior efforts had been made to modernize the city’s public schools — the Army Corps of Engineers worked on D.C. schools in the late 1990s, while a 2001 master plan approved by the D.C. Board of Education laid the groundwork for Fenty and Lew’s campaign — many school advocates note that OPEFM has been successful because it has enjoyed access to more money, flexibility and committed leadership than its predecessors.

“When Allen [Lew] took it over, what he was able to do was take projects that were in the pipeline and move them. He took projects that were in design, that had been planned, that had their specifications, and he was like, ‘OK, let’s get contracts out the door.’ He was absolutely able to get contracts out the door in a way that nobody else could,” said Mary Filardo, executive director of the 21st Century School Fund who has been working and advising on school modernization-related issues since the early 1990s.

Lew himself admitted that fixing the city’s schools was a challenge that paled in comparison to prior projects he had helmed in Washington, including the Washington Convention Center and Nationals Park baseball stadium.

Of course, governments don’t often get things done well and quickly, and Lew and OPEFM have been accused of sacrificing accountability for the sake of speed.

According to a May 2011 report from the Office of the D.C. Auditor, the speed at which OPEFM worked has come at a cost — expenditures have been tough to track and have often exceeded predicted budgets. In one case, the report found that Lew’s office could not account for $15.3 million in spending. The Washington Post reported earlier this year that 12 of the 16 major modernization projects he had overseen went over budget. (Wilson’s modernization saw its budget grow from $85 million to more than $120 million.)

During a March hearing in the D.C. Council, legislators expressed concern over the cost of the modernizations yet to come — some $2.4 billion is budgeted for the rest of the campaign, which will wind down in 2019 — especially considering that in late 2010, financial officials warned that the city was fast approaching a 12 percent debt-to-expenditures cap.

“We probably paid at least a couple hundred million too much for things. [Lew] was not worried about the cost. He was worried about the speed,” said Filardo, who also accused OPEFM of often shutting out residents in discussions over school modernizations and inequitably spreading funds throughout the city.

Former D.C. Mayor and current Ward 8 Councilmember Marion Barry seemed to hint as much, saying recently that while Lew did a good job on the schools he worked on, too few schools in the city’s poorer neighborhoods received needed attention. “I don’t know where it all went … too much in Ward 3,” he said. (The first phase of the modernization of Anacostia High School in Barry’s ward only began this year.)

Of course, during Barry’s terms as mayor in the 1980s and ’90s, the city’s schools plummeted into disrepair and neglect, with the system consistently ranked one of the worst in the entire nation. Now, for the first time in decades, schools that were once decrepit have discovered new life.

To that end, the school modernization push will continue, and more renovated buildings will continue to emerge where dilapidated structures once stood. Coupled with improving academic standards, the new facilities may well have an impact on what was once the country’s lowest-performing public school system. In October 2010, school officials reported that enrollment had increased for the first time in 39 years.