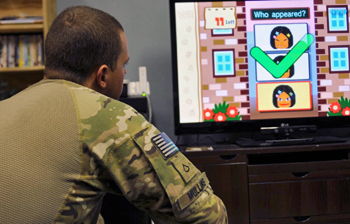 A land mine explodes near an armored vehicle on the battlefield in Afghanistan. The soldiers inside see a blinding flash and hear a deafening noise. Dazed, they grab their weapons and continue the battle. They assume they’re fine. But they might not be.

Over the next few days and weeks, the soldiers may realize that they’re having trouble with their memory and concentration, suffering from mood swings, feeling constantly irritable and having trouble sleeping — all hallmarks of a condition called traumatic brain injury.

According to the Defense and Veterans Brain Injury Center (DVBIC), which is tasked with tracking cases of traumatic brain injury (TBI) within the military, medical diagnoses of TBI among U.S. forces nearly tripled between 2000 and 2010, jumping from 10,963 to 31,353. Over the course of the 10 years that DVBIC has been keeping records, more than 220,000 service members have experienced a traumatic brain injury.

At its worst, severe TBI can leave the injured person devastatingly impaired — unable to walk, talk or think as he or she once did, having to relearn almost everything like a child. But even in its milder forms, TBI can have long-term consequences, especially if a service member experiences several such injuries, not uncommon among the rotating tours of duty imposed on today’s military personnel.

For example, veterans who experienced a traumatic brain injury in the field develop dementia and other cognitive problems at more than twice the rate of other returning soldiers, according to a study presented in July at the Alzheimer’s Association International Conference 2011.

Researchers at the San Francisco VA Medical Center and the University of California, San Francisco, analyzed more than 280,000 records from military vets ages 55 and older who received care from the Veterans Health Administration between 1997 and 2007; none had been diagnosed with dementia at the start of the study. They found that veterans who had experienced a traumatic brain injury faced a 15.3 percent chance of developing dementia within 10 years of the study; those who had not had a TBI had only about a 7 percent risk of developing dementia during that timeframe.

The study was one of the first to examine the association between dementia and different types of TBI diagnosis, including intracranial injuries, concussion, post-concussion syndrome and skull fracture.

“It didn’t matter what type of diagnosis it was — they were all associated with an elevated risk of dementia,” said the study’s lead author, Deborah Barnes, a mental health researcher at San Francisco VA Medical Center and an associate professor of psychiatry at the University of California.

After years in which TBI was swept under the rug — no specific military research dollars were devoted to the issue in the first half of the 2000s — the military is devoting an increasing amount of resources to tackling the problem of TBI and its aftermath. This includes everything from providing services to military families struggling with the day-to-day realities of TBI, to leading-edge research on TBI therapy and rehabilitation. In 2007, Congress allocated $150 million for TBI research in the military, and another $150 million on PTSD (post-traumatic stress disorder).

In September, the Uniformed Services University of the Health Sciences (USUHS) and the Henry M. Jackson Foundation for the Advancement of Military Medicine hosted the fourth annual TBI Spectrum conference, a multidisciplinary symposium on the challenges of traumatic brain injury that brought together experts from the military, government, industry and the private sector. 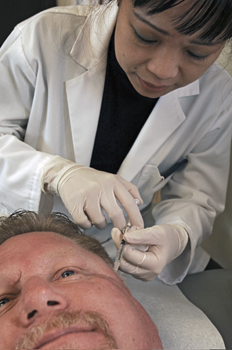 One of them was Dr. Stanley Prusiner, director of the Institute for Neurodegenerative Diseases and professor of neurology at the University of California, San Francisco, and the 1997 winner of the Nobel Prize in Medicine. He and Daniel Perl, director of the Military Brain Injury Studies program and professor of pathology at USUHS, are studying how a brain protein called Tau, associated with dementia, relates to traumatic brain injury in veterans.

Tangles in the front of the brain created by the Tau protein have been found in professional football players who have dementia after repeated head traumas, as well as other dementia patients. They’re found in veterans with TBI injuries as well, putting them at heightened risk for suicide.

“You can take those symptoms and overlay them on soldiers with PTSD who go on and take their lives,” Prusiner said in an Army press release. “While Dan is looking at the pathology of the accumulation of the Tau protein, we’re trying to take the other side of it and look for ways, such as a pill, to decrease the Tau protein so the aggregates that cause the tangles disappear.”

One innovative study of a potential treatment for TBI is now under way at four military sites — two Marine and two Army bases. Over the course of eight weeks, service members back from combat in Iraq or Afghanistan after suffering mild brain injuries will spend an hour each weekday breathing pure oxygen inside a hyperbaric chamber, which creates an artificial state of pressure on the body similar to what divers experience at about 20 feet underwater. As the pressure forces the oxygen into the body’s cells, the hope is that it will speed healing and allow the brain to recover more quickly and completely, lessening the headaches, memory loss and other problems that brain-injured veterans face. Overall, the aim is to enroll 100 participants by the end of 2011; if the study yields positive results, a larger trial is planned.

“I’m really hopeful that this potential treatment will help,” said Navy Cmdr. James Caviness, head of occupational health services and the study’s principal investigator at one of the four sites, Naval Hospital Camp Pendleton in California, which had recruited six participants at press time. “Some civilian doctors have treated veterans with mild TBI using hyperbaric oxygen therapy and reported good results, which led to Congress asking the Department of Defense to launch this pilot study. Mild TBI is one of the signature injuries of our war on terror, and we don’t have a complete treatment for it at this point. I’m very pleased and privileged to be involved in a program that may ID another potential treatment for our wounded warriors.”

But before you can treat TBI, you have to recognize that it exists. Many veterans — like many pro athletes — suffer “silent TBI,” developing brain damage from a concussion or blast injury without having obvious symptoms, or having only mild issues that they don’t associate with the injury. But if they go back into the battlefield (or onto the playing field) too soon and sustain another injury, the potential for more severe and lasting trauma is increased.

Last year, the military announced that it had developed a blood test that could accurately diagnose TBI by looking for unique proteins that pour into the bloodstream from damaged brain cells. The test has shown promise in a small-scale trial involving about three dozen vets, and soon will be tested in Phase III studies.

“When you look back on this war, 20, 30 years from now, I believe that the greatest advances will be in the area of brain science,” said Vice Chief of Staff of the Army Gen. Peter Chiarelli at the TBI Spectrum. “We’ve already made tremendous progress in what has largely been uncharted territory with effective protocols, new treatment and imaging methods, therapies, technologies and protective devices. And these and other advances are benefiting not only today’s service men and women, but people outside of the military, including athletes.”