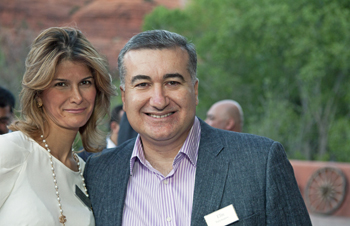 The striking water features in Washington and Baku connect the two capital cities for Lala Abdurahimova, the statuesque wife of Azerbaijani Ambassador Elin Suleymanov. While the Potomac River snakes through the District and divides it from Virginia, Baku borders on the much bigger, hydrocarbon-rich Caspian Sea.

“Washington reminds me of home since it is very hot here,” Abdurahimova said of the similarities between the two cities. “Back in Baku, we have a seaside right in town. There are resorts and everyone has someone in their family who has a summerhouse where you can go to swim and relax. Of course, here you just drive a little bit and you are at the ocean.”

The couple also got a taste of the ocean at their previous posting in Los Angeles, where for five years Suleymanov served as Azerbaijan’s first-ever consul general to L.A., leading the team that established the country’s diplomatic presence on the West Coast.

Ironically, “when we lived in L.A., we had the seaside all the time, but I missed having the rest of the seasons like we have here and at home,” Abdurahimova reflected.

Lala Abdurahimova and her husband, Azerbaijani Ambassador Elin Suleymanov, met while working in the Office of the President in Baku. Later they headed to Los Angeles, where Suleymanov set up Azerbaijan’s diplomatic presence on the West Coast.

Abdurahimova is no stranger to diplomacy. A diplomat herself, she worked at the Azerbaijani Embassy in Belgium as the cultural attaché and later in Baku as protocol counselor in the Office of the President.

She met Suleymanov in the office of the minister of foreign affairs while he was home in between studying at Tufts’ Fletcher School of Law and Diplomacy in Massachusetts. Later, they got to know each other when they both worked in the President’s Office — she as protocol counselor and he as a senior counselor in the Foreign Relations Department. They remembered meeting before and it only took one month before they were married. Six months later, they were off to Los Angeles.

But she cannot serve on the same staff as her husband, so Abdurahimova could only volunteer informally to help her husband in California as he set up the country’s first diplomatic mission on the West Coast.

“If he is chief of the mission or ambassador, I am not allowed to be on the staff,” said Abdurahimova, whose younger brother is also a diplomat and is currently posted to Brazil as a second secretary specializing in economics.

In Washington, the rule is the same. “I volunteer here and help wherever I can with designing the National Day celebration and other kinds of embassy entertaining,” said Abdurahimova, although she admitted, “I am looking for something to do here.”

Still, she has plenty to do watching over Emine, or Emi for short, the couple’s energetic, inquisitive 4-year-old daughter. “Even when we are on the phone and mention her name, she wants to know what’s going on and, ‘Why was my name mentioned?'”

This summer will mark the first time that the couple returns home to Azerbaijan in five years, so many relatives and close friends will be seeing Emi for the first time.

Emi was born in Santa Monica and earned the nickname “Obama girl” when she accompanied her father and mother for their credentialing ceremony at the White House with President Obama. “She was uncontrollable,” her mother recalled. “When the door opened to the Oval Office and she saw him, she opened her mouth and was so excited and jumped into his arms. The president held her for the official White House photo. She was thrilled with her box of M&M’s with the president’s signature. And she gave him a compliment: ‘He had a good suit on.'”

In the fall, they hope she can attend Washington International School near their residence.

In Washington, Abdurahimova feels she has another job: to show Americans the life of a “contemporary Muslim woman” from a country that only got its independence in 1991 after the collapse of the Soviet Union.

Since then, Azerbaijan, slightly smaller than the state of Maine, has raced to build a modern republic on the back of oil revenues that for a time gave it the highest economic growth rate in the world.

In recent years, however, that growth has cooled dramatically, part of the reason why the government is working to diversify its economy away from oil and gas. Abdurahimova noted that the country is working to develop its information technology and agricultural sectors. A graduate of the Azerbaijan University of Languages who speaks English, Turkish, Russian and French in addition to her mother tongue, Abdurahimova also noted that “the whole country has a high literacy rate of over 90 percent.”

Still, energy has made Azerbaijan a geostrategic player in the region. The Baku-Tbilisi-Ceyhan (BTC) pipeline, Abdurahimova pointed out, is the second-longest oil pipeline in the former Soviet Union and allowed the landlocked nation to export its natural resources to Europe and elsewhere. Azerbaijan’s Shah Deniz gas field is also part of the Southern Gas Corridor project, which, its backers in the West hope, will be key to delivering Caspian gas to European consumers and weaning the continent off Russian-supplied gas.

Indeed, Azerbaijan has been a reliable partner for the West. The Muslim-majority nation of 9 million people preaches religious tolerance, ships gas to Israel, and is a critical transit route for U.S. and NATO troops in Afghanistan. 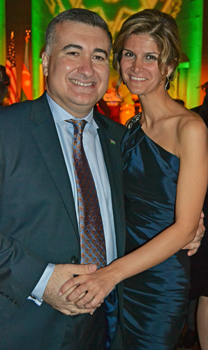 Despite its economic progress and strong relations with the United States, Azerbaijan’s track record on democratic reforms is far less impressive. The current president, Ilham Aliyev, inherited the position from his father, Heydar Aliyev, who developed a personality cult of sorts during his rule from 1993 to 2003. Today, the political system in the former Soviet republic remains completely dominated by the ruling New Azerbaijan Party and dissent is stifled.

Azerbaijan has also been dogged by a bitter feud with Armenia since 1992, when the two countries went to war over the disputed enclave of Nagorno-Karabakh. An estimated 25,000 people died and more than a million were made homeless by the fighting, and despite a 1994 ceasefire, the territory remains under Armenian control.

Azerbaijan, in fact, lives in a prickly neighborhood. “Of course, you make mistakes when you’re learning,” Abdurahimova said of Azerbaijan’s evolution since gaining independence 22 years ago. “We are between Russia and Iran, a ‘sandwich position,’ and it is difficult.”

Difficult, yes, but its position has also presented the country with the chance to portray itself as the secular antithesis of the conservative clerical regime in Iran, with whom Baku has frosty relations. Scantily clad pop stars such as Jennifer Lopez, Shakira and Rihanna have all performed in Baku, a glitzy modern capital often described as a cross between Paris and Dubai.

Azerbaijan also won the Eurovision Song Contest in 2011 and as the winners, hosted the hugely popular event in 2012, a crowning achievement in the country’s Western outreach.

“Azerbaijanis love music. We have a lot of international classical and folk music festivals,” said Abdurahimova. “When we won Eurovision, it was only our fourth time to enter. The first time we were eighth [place], the second time we were third, the third time we were fifth, and then we won the fourth time in 2011! What a showcase — we didn’t expect it. And now this year we were second. For a young country like Azerbaijan, it is wonderful for people, all of Europe, to know all about us.”

Azerbaijan may be young, but it’s been an ancient crossroads between Europe and the Caucasus. Today, the country’s historical treasures serve as a backdrop to a rapidly modernizing society.

“Inside historic Old [Town] Baku, you’ll find a 24-hour café culture, especially in the summer,” Abdurahimova said. Not far from the cobblestone streets of Old Town, a Four Seasons hotel rises above Baku’s sprawling waterfront promenade, joining other international chains such as Hilton that have set up shop in the capital city. The government is hoping to entice tourists to visit Azerbaijan, despite sometimes-hefty visa fees and a lack of development outside the capital.

Abdurahimova though says the country offers plenty of diversions for intrepid travelers. “Leave Baku and you can be skiing in the mountains and enjoying the resorts there. Besides the beach resorts on the Caspian Sea, the tea plantations in Lankaran also beckon. Out of 11 climate zones, we have nine,” she said.

And visitors won’t go hungry. “Kabobs and rice pilafs are native fare and sturgeon and caviar from the Caspian Sea are favorites, but so is meat, especially chicken and lamb,” she said, noting that fruit holds a special place on the Azerbaijani dinner table. “We have wonderful fruits — pomegranates, grapes, apricots, peaches, cherries, persimmons and a very unusual fruit called feijoa, which tastes like a pineapple mixed with a guava.”

She incorporated some of that indigenous cuisine at the country’s recent National Day extravaganza in Washington inside the cavernous Andrew W. Mellon Auditorium.

Abdurahimova was the main organizer of the event, which drew nearly 650 people. She brought in a band from Los Angeles and designed a festive atmosphere that featured multihued lighting and Azerbaijani table decorations, with help from Heba Al-Tamimi, head of event planning at the embassy. Abdurahimova was especially proud of her pomegranate centerpieces, an homage to the popular Azerbaijani fruit.

“Washington,” she explained, “is a very stressful place. We wanted our National Day to be fun, so everyone could relax and celebrate. So we brought a singer from L.A. who is Argentinean. Her name is Maria Entraigues. And then we had a DJ after that. My husband and I danced first when the music started so everyone else would start. We didn’t stop dancing until 10:30 and would have gone longer if it hadn’t been a work day the next day.”