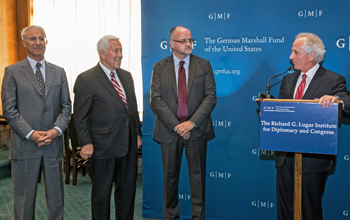 Richard Lugar, the two-time chairman of the Senate Foreign Relations Committee, returned to his old haunts in mid-June to celebrate a new initiative to connect the worlds of Capitol Hill and Embassy Row.

From left, Ambassador of Morocco Rachad Bouhlal, former Sen. Richard Lugar (R-Ind.), and Ambassador of Montenegro Srdjan Darmanovic listen as Sen. Bob Corker of Tennessee, Lugar’s successor as the ranking Republican on the Senate Foreign Relations Committee, gives remarks at the launch of Richard G. Lugar Institute for Diplomacy and Congress, held in the chamber where Lugar presided twice as chairman of the Foreign Relations Committee.

Lugar, a moderate Indiana Republican known for reaching across the aisle during his 36-year Senate career, lost a primary challenge in 2012 to a tea party-backed candidate, Richard Mourdock (who in turn lost the general election a few months later). Lugar’s defeat was not only a stinging indictment of the bipartisanship he espoused, it was also a huge blow to the diplomatic community, which lost one of its top foreign policy minds in a Congress consumed by domestic matters.

But the revered statesman hasn’t gone into retirement. Since leaving the Senate in January 2013, Lugar has been involved with a number of projects related to his career-long interest in foreign affairs. Now a senior transatlantic fellow at the German Marshall Fund, Lugar has worked with GMF to create the Richard G. Lugar Institute for Diplomacy and Congress, which seeks to increase cooperation and understanding between the foreign diplomatic community in Washington and the U.S. Congress.

In comments at the gathering, Lugar said he was delighted to return to the Foreign Relations Committee room where he spent important moments of his professional career and worked with such colleagues as John Kerry, Vice President Joe Biden and Secretary of Defense Chuck Hagel when all three served in the Senate.

Lugar said he hopes the newly formed Institute for Diplomacy and Congress can “bridge that gap” that often divides American lawmakers and international diplomats assigned to Washington. Members of Congress, the six-term senator said, can profit from relationships with the diplomatic community to better understand policy issues and learn how to better attract investment and boost jobs for their constituents.

That’s a key mission of the new institute: to educate American legislators about world affairs and how events abroad can have an impact at home — while teaching diplomats how to explain that narrative to Congress.

Corker, Lugar’s successor as the senior Republican on the Foreign Relations Committee, said Lugar “continues to create legacies” and cited this new program as an important post-senatorial contribution.

Craig Kennedy, president of the German Marshall Fund, said, “The Lugar Institute’s mission of strengthening ties between diplomats and lawmakers in Washington fills a great need to support robust diplomacy in a complex globalized world.”

The nonprofit Richard G. Lugar Institute for Diplomacy and Congress resides under the umbrella of the German Marshall Fund, a nonpartisan American public-policy and grant-making institution dedicated to strengthening transatlantic relations. 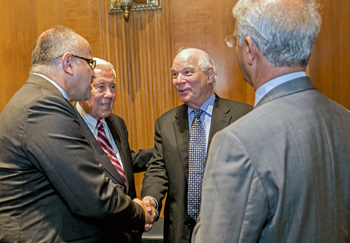 From left, Ambassador of Montenegro Srdjan Darmanovic is introduced by former Sen. Richard Lugar (R-Ind.) to Sen. Ben Cardin (D-Md.) at the June 19 launch of the Richard G. Lugar Institute for Diplomacy and Congress, a new initiative housed under the German Marshall Fund to bring embassies and Congress closer together.

The Lugar Institute will try to close the gap between Embassy Row and Capitol Hill by offering regularly scheduled training courses for incoming diplomats and members of Congress, monthly networking and policy events including a Senate speaker series, and an annual retreat for ambassadors and members of Congress. Embassies sign up for annual memberships to access the workshops and events, which are designed to build relationships and examine strategic issues, from energy security to transatlantic cooperation.

Already, the institute has hosted several ambassadorial roundtables where Lugar talked about the fiscal cliff debate and its impact on U.S. and world affairs, as well as the implications of America’s polarized political system for international affairs in President Obama’s second term. Each off-the-record discussion drew some two dozen diplomats from countries in Europe, Africa, Asia and Central America.

In addition, Lugar welcomed ambassadors from the Czech Republic, Cyprus, Israel, South Africa and elsewhere for a January reception and dinner at the U.S. Botanical Gardens honoring the freshman congressional class.

Lugar, who was a freshman in the fall of 1976 when he was first elected to the Senate, left the chamber with a considerable legacy. He is regarded as one of the most influential senators in the realm of foreign policy in the last quarter of a century.

A stalwart proponent of comity and compromise, Lugar worked for 36 years with presidents and lawmakers of both parties to promote arms control, combat the proliferation of weapons of mass destruction, craft sensible energy policies, tackle the global food crisis, and make his nation’s foreign policy machinery work more effectively. A lifelong and loyal Republican, Lugar often teamed up Democratic lawmakers over the years, including senators such as Sam Nunn, Joe Biden, John Kerry, Bob Casey and Chris Dodd.

Lugar’s central legislative accomplishment was the Nunn-Lugar Cooperative Threat Reduction Program. Working with Democratic Sen. Nunn, he developed a program to help the nations of the former Soviet Union secure and then dismantle weapons of mass destruction. It has grown into a global program with initiatives in Africa, Asia and Europe. Lugar proudly notes the program has eliminated more nuclear weapons than the combined nuclear arsenals of France, China and the United Kingdom. (Russia almost abandoned the program this summer until a last-minute deal was struck to extend the arms agreement; also see “Few Options as Landmark Pact With Russia Set to Expire” in the June 2013 issue of The Washington Diplomat.) 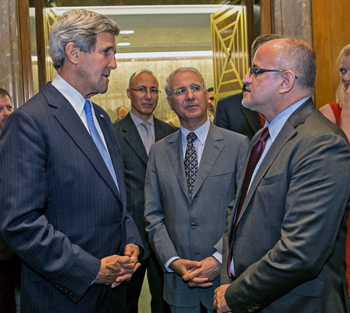 From left, Secretary of State John Kerry talks with Ambassador of Morocco Rachad Bouhlal and Ambassador of Montenegro Srdjan Darmanovic, both founding country members of the Richard G. Lugar Institute for Diplomacy and Congress.

Lugar helped to persuade the Reagan administration to change its policy toward the apartheid regime in South Africa in the mid-1980s and to recognize Corazon Aquino as the winner of the disputed Philippines presidential election in 1986 between Aquino and Ferdinand Marcos.

While serving in the Senate, Lugar did the important but unglamorous work of making American foreign policy operate more smoothly. He served as a presidential envoy to Libya, an election observer in the Philippines and Ukraine, a congressional observer to arms control talks with the Soviet Union, and a U.S. observer to the ceremony announcing the Nabucco pipeline aimed at diversifying Europe’s natural gas supplies.

Lugar was also one of the first lawmakers that diplomats sought out when they visited the United States, and he arranged time in his schedule to meet with overseas visitors who were in Washington (read more on what Lugar’s departure meant for the diplomatic community in the June 2012 edition of the Diplomatic Pouch online).

In addition to lending his name and support to the Lugar Institute for Diplomacy and Congress, he has affiliations with the University of Indianapolis, Indiana University, Georgetown University, the Center for Strategic and International Studies, and the German Marshall Fund.

John Shaw is a contributing writer for The Washington Diplomat. He is the author of the 2012 book “Richard G. Lugar, Statesman of the Senate: Crafting Foreign Policy from Capitol Hill.”