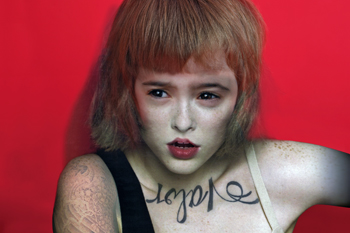 Cecilia Avendaño’s image from her “Pride (Orgullo)” series is among the works by 17 Ibero-American photographers in “Transitional Bodies” at the new Spanish cultural center.

A Beaux-Arts mansion sits majestically on the corner of 16th Street, the city’s Embassy Row of the early 19th century and today’s direct thoroughfare to the White House.

This former residence of the ambassador of Spain and now the Spanish Cultural Center is hosting two photography exhibits from renowned and emerging artists of the Iberian countries — Spain, Portugal, Latin America and the Spanish-speaking Caribbean.

Presented as part of FotoWeekDC 2012, an annual citywide photography festival now in its fourth year, the exhibits mark the official launch of the building’s transformation to a cultural space.

“One of the main assets of this building is that we’re next to the Mexican Cultural Institute,” said Xavier Ruiz, cultural coordinator of the Spanish Embassy. “We want to become a hub of Spanish and Latin art in Columbia Heights.” That is a short order given the exceptional exhibits bursting with originality, passion and avant-garde edginess.

In the ballroom, “Transitional Bodies” comprises the work of 17 Ibero-American photographers. 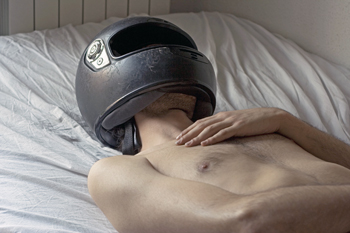 Rodrigo Dada and his series “Voragine” is featured in “Transitional Bodies” at the new Spanish cultural center.

Argentinean curator Fabián Goncalves Borrega looked for a theme in the photos that landed on his desk following the Ibero-American Cultural Attachés Association’s call for entries. “I found a majority talking about the human body, about different approaches to our own physicality and existence,” he said.

So he divided the exhibit into five groups. “Body, beliefs and society” showcases Chilean photographer Cecilia Avendaño’s sad faces of tattooed girls. One girl is set against a red background, the other one green. Both are skinny, highly sexualized children with vacant stares. “They express the peer pressure that young ladies suffer all over the Americas,” said Goncalves.

Photographers in the group “Adaptation, roughness and resistance” demonstrate that living in poor conditions demands determination.

Paraguayan Carlos Bittar depicts a little boy squatting on a tree stump beside a river while pouring water over his head. When the city dumped trash into the river, the village way of life was destroyed. “Villagers quit fishing, collected the trash, and now sell it as recyclables,” said Goncalves.

He strived to maintain a consistent mood throughout the exhibit and succeeded. The result is not upbeat but provocative and striking.

In “Underworld, a legal marginality,” Argentinean Marcelo de la Fuente casts a woman in black fishnets from the back, sitting cross-legged on a bed. The scene is a haunting monochromatic red, redolent of a dingy red light district. He explores a sexually charged situation that doesn’t reveal anything but brings the viewer into intimate contact with the woman, explained Goncalves. 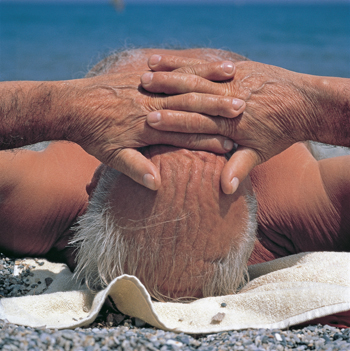 Across the ground floor, in the Moorish-style room with blue-tile walls, a central fountain and panoply of arches, hangs the exhibit “Connections and Confrontations.”

Exploring the work of more than a dozen photographers awarded the Spanish National Prize for Photography, the exhibit showcases styles that have emerged over the past 60 years in Spanish photography, from realism to conceptual to journalistic to surreal, in black and whites and color, Polaroid and digital images.

A fascinating aspect of the collection is the different character of pictures taken during the Francisco Franco dictatorship from 1936 to 1975 and afterward.

Joan Colom and Gabriel Cualladó, shooting in the 1950s, captured stark city landscapes and the paucity of vibrant life.

“After Franco died in 1975 there was an explosion of creativity and artistry,” said Carmen de la Guerra, curator of the exhibit “The Spanish National Photography Prize: Connections and Confrontations.”

The 1980s ushered in the countercultural movement La Movida Madrileña across society, reviving the economy and forging a new Spanish identity. It was now acceptable to show nudes, such as in Carlos Pérez Siquier’s photograph “Agua dulce,” in which a big woman sleeps nearly naked on the sand, as well as Toni Catany’s “El niño de arena,” a sensual photo of a man/woman’s body photographed so that the gender is ambiguous. 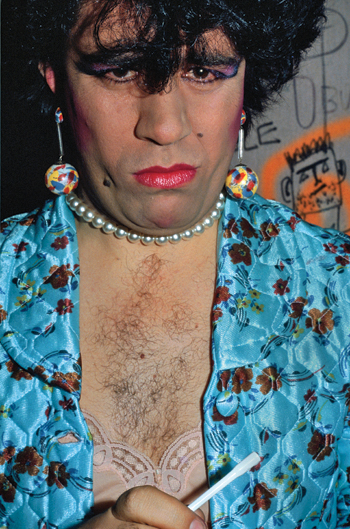 Pablo Pérez-Mínguez’s “Pedro Drag” is on display in “The Spanish National Photography Prize: Con-nections and Confrontations.”

Ouka Leele, one of the most important photographers during the La Movida Madrileña period, is as emotional and diverse an artist as Pablo Picasso, taking realistic, abstract, playful and surreal pictures.Asked what sparks her imagination, she replied: “I am a fighter. And I fight for freedom. If the artist isn’t free, who will be then? I like to taste every way of expression and I need to take risks to feel alive. My inspiration is a source that springs from my inner self. Inspiration is like a clear water river in which once you’re entered, you never leave.”

Today, Spanish photographers remain at the vanguard of creativity. Chema Madoz, a conceptual artist who finds inspiration in everything that surrounds him, shoots fanciful pictures that elicit a laugh. Barbed wire in a flowerpot appears on first sight as a cactus, while a cylindrical wire birdcage floating in the sky precisely over a cloud seems as if the cage has caught the cloud.

“I am aware that a common first reaction when seeing my pictures invites smiles,” wrote Madoz in e-mail, “but it is not something you chase. I think rather that it is the uncertainty of the audience to see something unexpected in the everyday.”

Likewise, Spain’s new cultural center, inside the historic mansion designed by architect George Oakley Totten, is an unexpected break from the everyday. Meandering the high-ceilinged rooms is reminiscent of wandering the Museo del Prado in Madrid or the Guggenheim Bilbao. Here in the middle of America’s capital city, Washingtonians are transported to an oasis of Spanish imagination and ingenuity.

Audrey Hoffer is a freelance writer in Washington, D.C.