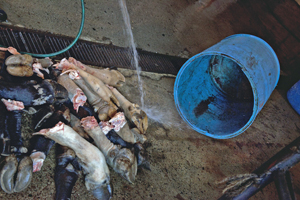 Muriel Hasbun’s photograph was part of an innovative digital exchange with Pablo Ortiz Monasterio whereby both artists traded and responded to the other’s images for one year, the results of which are on display in “Conversación” at the Mexican Cultural Institute.

To walk through the “Conversación” and “Maremágnum” photography exhibits, concurrently on display at the Mexican Cultural Institute as part of FotoWeek DC 2011, is a wonderful exercise in international voyeurism that both engages and challenges.

“Conversación” is an innovative back and forth of ideas and images, built on numerous photographs taken and exchanged by the artists Pablo Ortiz Monasterio and Muriel Hasbun. The novel exhibition is the culmination of a year-long collaboration between Monasterio and Hasbun, who serves as the chair of photography and associate professor at the Corcoran College of Art + Design. It all began when Monasterio, who is also a visiting artist at the college, sent a single photograph as a digital file to Hasbun, who replied by sending back one of her own.

“This exchange went on for months. Each responded to the next image in his or her own way, not knowing where the accumulating sequence was leading or what its narrative content ultimately might be. Other than agreeing on the ground rules, they did not discuss what they were doing while the exchange was taking place,” explained curator, writer and teacher Andy Grundberg.

The outcome of this exchange is a boundless interchange of perspective and insight. That is obvious in two portraits of children’s clothing, both interpreted distinctively. Monasterio’s image captures the colorful outfits busily hung outside as store merchandise, while Hasbun’s creates a picture dominated by white, focusing on more formal children’s clothing draped in a similar fashion as in Monasterio’s image, but on a bar.

“The show thus uses photography to probe the possibilities of cultural and visual exchange in a digital age. Taking place over the Internet, with one artist in Mexico City and one in Washington, D.C., the conversation is a wordless interplay of information and meaning,” said Grundberg.

The conversation continues in two complementary but vastly different pictures where the simplicity and divinity of nature is depicted, on the one hand in a view of far-off mountains seen through a beat-up tire, while in a second shot, the white-tipped mountain forms the background of an enigmatic landscape whose main subject is a girl holding a cloth of Jesus. Each image does a mesmerizing, thought-provoking dance with its counterpart and viewers are invited to watch.

“Indeed, ‘Conversación’ is ultimately about how art is made and how meaning is constructed. Every move the artists make is smart in an intellectual sense but also deeply intuitive, a gesture of not knowing more than it is of knowing,” Grundberg said. 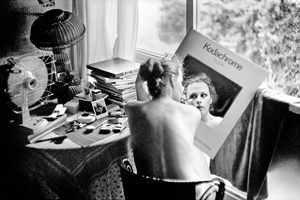 A separate exhibit at the institute, “Maremágnum,” highlights the photography of Spanish photojour-nalist Jordi Socías, whose images such as “Mayte,” offer a striking snapshot of everyday life.

Upstairs, “Maremágnum” is a more traditional though no less cutting-edge photo exhibition, co-organized by the Embassy of Spain and its “SPAIN arts & culture” fall-winter 2011 programming. The show is a wide-ranging visual parade through the last four decades in Spain and Europe guided by an icon of photojournalism, the self-taught Jordi Socías.

Influenced by masters such as Richard Avedon, Socías turned his lens on a variety of subjects, alternately photographing Spain’s transition to democracy, city shots, surreal scenes and, most notably, key personalities in striking portraits.

Weaving in and out of the exhibit, it’s hard to fathom that his photography career almost never was. After co-founding the Spanish news agency API-Agencia Popular Informativa, which distributed news that the Franco regime censored, he worked for the magazine Cambio 16 and subsequently for other well-known periodicals, some of them no longer available. Not happy with how his photographs were being published, Socías started working as a publisher, though fortunately, he never abandoned the camera.

Decades later, Washingtonians will relish his singular vision in about 80 pictures, the majority of which are black and white yet still offer a colorful, vibrant look at history, pop culture, and both ordinary and extraordinary scenes.

We see snapshot of everyday life, such as Madrid’s famed Gran Via, a funeral procession, and an engaging Amsterdam café streetscape that frames the eatery’s architecture, its décor and a revealing minute in the lives of its patrons. The wonderment conjured by Socías is also evident in his photo of a large brass tuba, which he transforms from a simple musical instrument into a sinewy movement of metal using an unusual, in-your-face angle that makes viewers do a double take.

With his edgy photographic storytelling composition, Socías has collaborated with leading Spanish magazines since the 1970s, producing images of famous Spaniards such as actress Penélope Cruz and director Pedro Almodóvar, which strike a familiar chord.

“Almodóvar’s modernity is such that I picture him as one of the members of the [1930s] vanguard movement in Paris or in the New York of the [1970s], among Picasso, Matisse, Pollock or Warhol,” the artist said of the director last year. “His, is the most stormy brain of our days and at the same time, the proof that one can reach universal meaning from the local scene.”

Socías too has derived meaning through images that are honest yet subjective and serve as a testimonial to his commitment to his craft, as well as the profound impact he has had on it.

Fresia Cadavid is a contributing writer for The Washington Diplomat.