Individually, each work in the newest exhibition at the Corcoran Gallery of Art freezes moments of not only African American history but of U.S. history into single modern interpretations. Together, the pieces show how those histories continue to evolve and interact as emerging artists learn from seasoned ones and offer fresh viewpoints on racial, sexual and historical identity in contemporary culture.

“The art history there has not been concluded; it’s still being written,” Henry Thaggert, chairman of the museum’s advisory committee, said of “30 Americans,” on display through next February. “That’s very, very exciting.”

Selected from the Rubell Family Collection, the group of 76 photographs, paintings, drawings, sculptures and videos represents the work of 31 of the most influential African American artists of the past 30 years and is linked by a common theme: identity.

“It’s also, of course, specifically about African American history and the very particular ways the history of slavery, human rights and the popular imagery in music shape what it means to be black in America, and how individuals embrace or reject or twist that tradition to create their lives and their work,” said Sarah Newman, curator of contemporary art at the Corcoran and the show’s organizer. 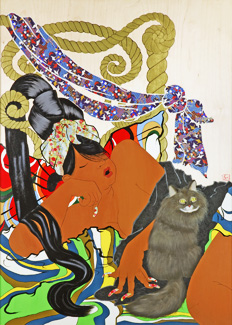 For artist Shinique Smith, identity can be defined through memorabilia. In “a bull, a rose, a tempest,” a tied-up collection of various items that hang from the ceiling, such as a handbag, a shoe and military fatigues, Smith honors the late rap artist Tupac Shakur, whom she knew as a schoolgirl.

“I find it really interesting how the public sees them through what merchandise they create to remember them,” Smith said. “I use the materials I use — the dresses and purses and things that represent who we are or what we believe in through the merchandise we buy and the myths that are attached to these things. All those things that we subscribe to can be distilled into the objects that we’ve used. They’re imbued with the energy. When I collect them and put them all together and tie them up, I feel like I’m also bringing different economic backgrounds, different cultural beliefs” together.

From there, the exhibit winds through several upstairs galleries. A jewel-toned room houses two photographs by Hank Willis Thomas. His “Basketball and Chain” and “Branded Head,” prints from 2003, are simple in their power and blunt message. The first shows just the ankles of a black man wearing Nike sneakers, one of which is chained to a basketball, while the other is a faceless profile of a black man’s shaved head literally branded by branding, as he sports the Nike symbol made permanent by scarring — a visual statement that draws parallels between the historic culture of lynching and slavery and the commodification of today’s professional sports. 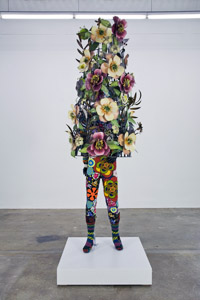 Bright, bold colors dominate much of the exhibition. Barkley L. Hendricks’s “Noir,” an oil and acrylic on canvas from 1978, shows a dapperly dressed man straight out of the 1970s — right down to the afro, cigarette and aviator-style sunglasses.

Other pieces play on tradition. Kehinde Wiley’s “Sleep,” an oil on canvas from 2008, is reminiscent of the classical image of a chiseled body strategically cloaked in white sheets and lying on a bed of flowers, only this body is black and the chin goateed. In “Equestrian Portrait of the Count-Duke of Olivares” from 2005, a black man clad in a red sweatshirt, khaki pants and Nike sneakers sits astride a bucking white horse against a backdrop of regal blue and gold — a hip-hop twist on the original royal Spanish painting from 1634.

Still others are more solemn. Carrie Mae Weems’s deep red monochromatic prints with sand-blasted text titled “Descending the Throne” offer an in-your-face snapshot of the journey of blacks from upper-class citizens to slaves, mammies, foot soldiers, cooks, anthropological debates and “anything but what you were,” according to one piece in the provocative series. Kara Walker’s “Camptown Ladies,” 666-inch-wide black decals against a white backdrop, depicts silhouetted acts of disturbing violence and sexual taboos in a paradoxically graceful manner.

Although “30 Americans” is the latest of about 40 shows at the Corcoran to focus on African American art, race is omitted from the title to reflect that the issues the artists deal with are not just black issues, Newman explained. She also wanted to show how the works create a community and how subject matter crosses generations.

“You can see Barkley Hendricks’s vision of style and self-presentation from the 1970s wind its way through the work of Thomas,” for example, Newman said. “The work just kind of spreads out and seeps into nearly every corner and nook and cranny of the American experience — from reminders of our darkest moments in our collective history, to completely joyous celebrations of bodies and lives, to philosophical investigations of language and meaning.”