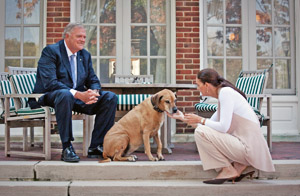 When Susie Annus and her husband, Australian Ambassador Kim Beazley, first arrived in February 2010, Washington was at a standstill.

“Five days before we landed, you had this tremendous snowstorm and there was still four feet of snow on the ground,” Susie recalled. “It was hard getting around and we had to get Ally, our 13-year-old Rhodesian Ridgeback, used to going out into the snow and ice outside.”

However, it was the walk her husband made up the narrow, steep path from the front gate back to the official residence to retrieve a forgotten document that sealed their fate for the next six months.

“I was fine on the way up,” the ambassador said, “but downhill was something else. I didn’t see the black ice when I stopped to open the car door. I fell twice, tearing the ligaments in both my patellae [knees].”

For Susie, having her husband — who used to play rugby and spent most of his childhood swimming away the effects of the polio he contracted when he was 5 — lying on a hospital bed in their home library for the first three months of his posting made for a unique start to D.C. diplomacy.

Susie Annus joins her husband, Australian Ambassador Kim Beazley, and Ally, their 13-year-old Rhodesian Ridgeback, in front of the Australian residence, which she has been working to showcase with contemporary Aboriginal art inside, while revamping the extensive grounds outside.

“Essentially, the ambassador’s office moved here and we had to somehow find ways to unpack and settle in without interfering,” she remembered. “Plus, our daughter Rachel was trying to figure out how and where to file late college applications and getting more and more anxious. Then she decided it wasn’t Washington she was interested in but California — another major hurdle! And toilet training the dog in the snow. It was an interesting time. We were all bouncing off the walls by the time the first six months was over. I couldn’t get anything else done.”

But this couple knows how to get things done, especially in the face of adversity — though most of the time it’s related to politics, not the weather.

Kim Beazley is a veteran politician and longtime Labor Party stalwart who served in the Australian Parliament for 27 years. He was a minister under Prime Ministers Bob Hawke and Paul Keating, holding, at various times, the portfolios of defense, finance, transport and communications, employment education and training, aviation, and special minister of state. Beazley, who narrowly lost out on becoming prime minister himself in 1998, also served stints as deputy prime minister and leader of the Australian Labor Party and leader of the opposition before retiring from Parliament in 2007. Two years later, Prime Minister Kevin Rudd tapped him for the Washington posting given his extensive political background.

Meanwhile, Susie Annus, formerly an award-winning television producer, credits her professional organizing skills, which include “running another campaign every three years,” for helping her jump into diplomacy for this latest temporary appointment.

“Since we had to deal with getting elected every three years, we’ve always operated in short-term packages [of time],” she explained. “It helps to deal with what is present and do as much as you can in that timeframe.”

She added: “We came here ready to entertain and show everyone what Australians do best. We wanted to make an instant impact when someone came to this residence.”

Among their first visitors were a couple from their hometown of Perth who are prominent art collectors of contemporary Aboriginal art.

“When they saw the small prints we had on the wall in the dining room, they offered to give us a small part of their collection to have on display while we are here,” Susie explained. “Together, we picked out seven canvases from the Lepley Collection, they took care of getting them here, and three months later, the couple flew back to help with the installation.”

Art from private collections and institutions has been loaned to different Australian ambassadorial residences before, however, “the size and caliber of this loan is unique.”

Today, the brightly colored works are prominently displayed in the residence and feature thickly dotted patterns, while others are more subdued; the two by well-known Aboriginal artist Clifford Possum Tjapaltjarri are the most valuable.

“I wasn’t sure that this art would work in this more traditional house with very traditional furnishings,” Susie admitted, “but as soon as the seven canvases went up, I loved them. And so does everyone else. They are mesmerizing. There has not been a function where someone hasn’t been overwhelmed with the art — the reaction has been totally positive.”

The residence, a Georgian Revival home built in 1923 and originally called White Oaks, was leased in the mid-1920s by Gen. George S. Patton before it was bought by the Australian government in 1941. Today, the residence, with a pool and tennis courts, sits like a crown on top of a hilly block with several porticos and a gracious drive down to the gate.

The Australian enclave also includes the handsome red brick residences of the embassy’s deputy chief of mission and three others for the consul general as well as the heads of defense and treasury. Susie is also hoping their plans for a new back terrace to the residence to accommodate larger events will be ready before they — and the art — return down under in less than two years.

The ambassador has two older daughters from a previous marriage who live back in Australia: Jessica, 32, lives in Perth and has three boys, and Hanna, 30, has a six-month-old baby boy who visited Washington for the first time this past Christmas. The couple has a daughter together, Rachel, 19, who’s attending the Annenberg School for Communication and Journalism at the University of Southern California.

“Rachel’s good in drama and writing and she’s better suited for being on camera. That was the last thing I wanted to do is be on the air,” Susie said. 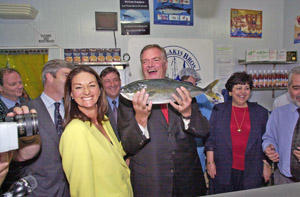 A former award-winning television producer, Susie Annus has long helped her husband, Kim Beazley, a Labor Party stalwart who served in the Australian Parliament for 27 years, campaign for office.

The future TV producer and politician met while at university but afterward had gone their separate ways. Years later though, when the ambassador became single again in the 1980s, he discovered that Susie wasn’t married as he had thought and he called her up. Susie, never married before, was 38 then.

Today, Susie is enjoying focusing her energies on Washington diplomacy and the Australian residence. In addition to installing artwork, her second project has been improving the extensive grounds of their temporary home. As soon as the snow melted that first winter, it was obvious that “the garden had been neglected and needed attention, although the house itself had been remodeled about five years ago after then Australian Prime Minister John Howard came to stay for security reasons after 9/11 and saw the need for repair in person,” she said.

“We got in the car and drove around Georgetown to find a garden we liked and, hopefully, a gardener,” she recalled, noting that they found retired landscape architect Gordon Riggle and convinced him to fix up the grounds along with his former student, Lela Fredericks, who have brought new life and distinction to the residence’s boxwoods, holly trees and classic design.

Susie’s third project will be to compile a photographic record of the house and how it evolved under different ambassadors. “I’ve already been in touch with everyone and they’ve all promised to send photos, but I haven’t really received any yet. We have no pictorial record and I want to show the changes through photos and written comments of what happened when.”

The couple is very familiar with Washington, having visited multiple times over the years during the course of Beazley’s long political career.

“We never stayed longer than five days though,” Susie said, explaining how she plans to relish the extended opportunity to explore the nation’s capital.

“We had a real routine,” she said of those brief business visits. “We’d arrive about 10 p.m. at what was then called the ANA Hotel, take our showers, and head out to Kramerbooks. They have a range [of books] that we don’t see at home; you have such a larger and diverse population than we do and you have wonderful American authors. It was a chance to see what else was new, what would be featured here. We’d always get five or six new books each and then stop for a late-night coffee or something on the way home,” she told us.

“This time, we arrived with 1,600 books, a third of our collection,” she said. “We’ll probably triple that by the time we leave. We have books everywhere, all over the house, not just here in the library.

“Kim reads three and four books at the same time — I can’t. I read only one at a time,” she continued. “I love fiction. Two of my favorites are ‘Birdsong’ and ‘Cold Mountain.’ He loves history and biographies of the world’s greatest leaders like FDR’s ‘Funeral Train’ and ‘The Last Campaign.’ He is often asked to write a book review for the Australian.

“We’d still prefer to buy our books at a good bookstore than online and would rather hold a real book,” she added. “We always take a book along on the plane.”

That’s her secret for making the 19-hour, two-leg trip back and forth to Australia more enjoyable. Canberra, Australia’s capital, is almost 10,000 miles away from Washington and, according to the time of year and your location in the vast country (roughly the size of the United States), there can be a 14- to 16-hour time difference from here.

“Kim handles the business with America during the day and then at night he works with Australia as their day begins,” Susie explained. “When it’s 6 p.m. here, they are just starting to open offices there. Most of the work with Australia gets done between 8 to 10 p.m., Washington time. If we have an evening event, he tries to get to the phone by 9:30 p.m. or so. He seldom has to stay up late to be available unless there is some urgent business.”

Although Aussies and Americans have plenty in common — language, culture, governance — Susie sees intriguing differences in politics, education and health care and even humor.

“We are definitely more casual, not as formal as Americans, more laidback,” she observed, citing her daughter’s first experience living on an American college campus. “Our humor is completely different. We’re much more robust, almost mocking. As my daughter learned, you can be easily misunderstood.”

As for her own style, Susie, a veteran political wife, says, “Although I spent a small fortune to always look nice during the [political] campaigns, there was never any discussion about what I was wearing, who the designer was, like here. It was only important that I wore the ‘Australian brand.'”

When I asked the ambassador to sum up what it means to have Susie by his side, whether during political campaigns in Australia or embassy functions here in Washington, he smiled and simply said, “She’s my life.”