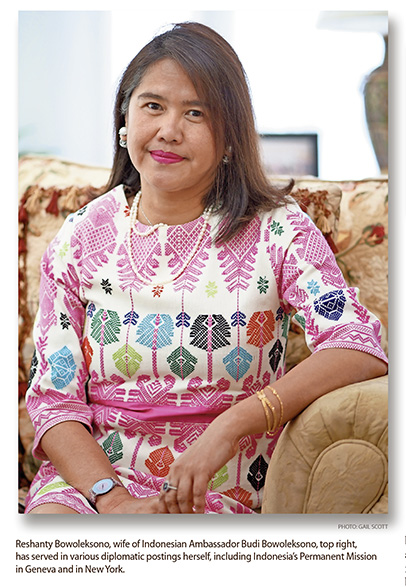 Reshanty Bowoleksono, the wife of Indonesian Ambassador Budi Bowoleksono, has an intimate understanding of her homeland and how to promote it, having been a career diplomat herself for many years.

She served in the Indonesian Permanent Mission in Geneva from 1994 to 1998 and was assigned from 2013 to 2016 to Indonesia’s Permanent Mission to the U.N. in New York. While in Indonesia, she served as secretary to the foreign minister in the Organization Planning Bureau at the Ministry of Foreign Affairs and in the Directorate General of Multilateral Affairs. She has taken three leaves of absence. “First was Geneva when I had my baby, and the second was Kenya when my husband was ambassador in Nairobi from 2008 to 2010, and this posting to Washington is my third,” Bowoleksono said.

But she continues to tell Americans about her Southeast Asian island nation, which comprises the largest archipelago in the world, boasts hundreds of distinct ethnic and linguistic groups and is home to the largest Muslim-majority population on the planet.

While Indonesia has had problems with Islamic extremism and high-profile terrorist attacks, Bowoleksono says her country of over 260 million is still known for its religious tolerance.

“Eighty-five percent of our people are Muslim. Our people are also Catholic, Christian, Buddhist, Hindu and those who just believe in God. We don’t disturb each other. We celebrate all the holidays. It’s between you and God. This is what my parents taught me. It is the beauty of tolerance,” she said during an interview in the sitting room of the residence, which features a picture of the family with former President Barack Obama, who spent his early years in Indonesia.

“We have so many differences,” she added, noting that while the country is unified by a national language (Bahasa), “we have 700 different languages and 300 ethnic groups.”

She encourages Americans to make the long trek to familiarize themselves with Indonesia’s diverse culture. She noted that the country is 24 hours away whether you fly through Europe, the Middle East or Japan. “Tourists don’t understand. They come for a couple of days. You have to stay for at least two weeks and a month is better,” Bowoleksono told us. “You must go to Jakarta, Bali and Central Java. Indonesia is hot and beautiful. Because of the rainy season, the best time to go is October to April.”

When Bowoleksono was in college, her parents wanted her to become a medical doctor. “My father was a district attorney and my mother was an economist. But I wasn’t accepted in medical school. I like biology — to cut up frogs, fish, birds — but not chemistry. Instead, I was accepted to study politics and international relations.”

That career path led her to love, although it wasn’t necessarily love at first sight.

“My husband and I knew each other when we both worked at the Ministry of Foreign Service. I sat in the front and he was in the back. Our friends kept putting us together. We had a couple of dates and then he said, ‘Marry me.’ I didn’t say yes but he asked me all the time. I didn’t like him because he smoked, mostly cigars. I think he was looking for someone to have fun with. About a year later he asked me again and I said yes. We got married … and he stopped smoking,” she laughed.

“Our son Lebdo was born in Geneva. When we were back in Jakarta, he was five months old. In Austria, he was 6 years old and learning to speak German. Back in Jakarta, studying English was compulsory. Now, Lebdo is studying accountancy at Virginia Tech,” where he is a third-year student. “We talk almost every day.”

Despite the constant traveling and moving, Bowoleksono said having a child didn’t interfere with her diplomatic career. “I was always together with my child. I sincerely and freely wanted to be with him. Children leave, regardless of our work. Then we live alone. But thank God our son is quite close to us.”

Over the years, the family has shared many hobbies together, including sports. “We played tennis, badminton, running, skiing, biking and walking,” Bowoleksono said, noting that today, she and her husband often walk from the residence on Tilden Street to Chinatown, Georgetown and the White House via the Rock Creek paths.

Like many Indonesians, the whole family also loves music and plays many instruments. 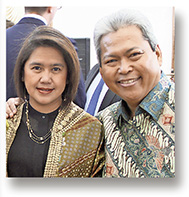 “My husband plays the guitar and bass but he’s not very patient. He stops playing when the song gets hard. My son, when he was 5, was a drummer, at first hitting with chopsticks. Now he plays the guitar and piano. He’s been playing the piano since he was 10 years old until university.”

Bowoleksono herself plays the Indonesian angklung, a popular traditional instrument made of bamboo tubes attached to a bamboo frame. The tubes are carved to have a certain pitch, which make for a unique sound when played as part of an ensemble.

Despite their shared love of music, Bowoleksono joked that she doesn’t necessarily share the same tastes as her husband.

“That’s the problem. He likes rock music and I like R&B,” this good-natured wife said, noting that she does like Simon & Garfunkel and Bob Dylan but otherwise isn’t a fan of hard rock. “I hate his music — you can’t sing it, only shout it. Rock music is a big deal in Indonesia. He and our son love to go to big concerts. I never know why he likes rock. I can’t answer why I married this person,” she quipped with a wry smile.

One reason may be that he’s good in the kitchen. “When I was growing up, cooking was my hobby, my first career. My mother was a very good cook. I had only one brother but five sisters. Today, I like to clean up. My husband does the shopping and the cooking.”