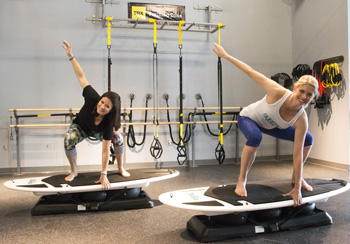 Also See: Sticking to Your Routine on the Go

It’s June. That means two things: Summertime is here and 80 percent of us who made New Year’s resolutions to get fit are, well, not meeting the mark. Studies show that most of us throw in the gym towel on resolutions within a few months — a move we’re likely regretting as the humidity grows and the hem lines shrink.

It’s not too late, though, to get in shape for the smaller summer ensembles — we’re looking especially hard at you, swimsuits. We surveyed three classes at boutique gyms that pack a lot of power into an hour or less, zapping calories while strengthening muscles and pushing cardio. Whether you’ll be riding the waves in Costa Rica, creating your own Tour de France or just lounging on a Tahitian beach, these classes will get you ready.

Whether you’ll be riding the waves or not this summer, this 45-minute class promises to tone the entire body. Participants stand on a specially designed surfboard called the RipSurfer X — a 70-inch board that balances on three Bosu-like balls. Straps hold it in place, but they can be adjusted to make the board less stable as class members’ abilities advance.

Brittany Clark, left, and Erika Surma, co-owners of REV Pilates Gym, exercise on a RipSurfer X — a 70-inch board that simulates a surfboard.

REV Pilates, which opened late last year, offers two types of SURFSET classes. The Blend class incorporates more cardio and can burn up to 900 calories in one session, while Balance is heavy on yoga poses and holding positions, co-owner Erika Surma said.

During a recent Blend class, five participants copied Surma as she warmed the group up with simple, low-to-the-board poses such as child’s pose, plank and downward dog — all made more challenging by the constant wobbling of the board. The idea is that participants have to use their core muscles — abdominals and obliques, for instance — to keep their bodies steady.

Surma got hearts pumping with a series that included hopping up and over the board and with a yoga-like set that involved lying stomach-down on the board, extending the arms in front of you and moving them as if free-style swimming. From there the group pushed up into a plank and then up into a triangle pose-like position facing to one side and lifting one arm up. Then it’s back to plank and the simulated swim.

SURFSET is a relatively new workout. Founded by professional hockey player and recreational surfer Mike Hartwick, SURFSET got a boost from “Shark Tank” investor Mark Cuban in 2012. Now classes are offered worldwide. “Shark Tank” is an ABC show that gives everyday entrepreneurs a chance to pitch their ideas to investors.

But SURFSET is still relatively sparse in the D.C. area. REV Pilates co-owner Brittany Clark says that’s partly because people are wary of hopping on the unstable boards.

“It looks intimidating to a lot of people, but it’s not. It’s very approachable. Once you get over that initial fear of it and just try it, you’d be surprised at how good you are at it,” Clark said. “I notice changes within a single class. From the minute you step on the board, you’re very wobbly. By the end of the class, you’re in control of the board.”

Although the studio’s schedule states that the class is open to all ability levels, Surma said that’s not completely true.

“If somebody walks in here and they’ve never worked out before, I will never recommend SURFSET, especially if they’re older,” she said. “Anybody in their senior years or anyone with osteoporosis, osteopenia, I wouldn’t recommend it” because of the reliance on balance.

Surma and Clark say that although participants feel improvements after the first class, it takes about six weeks of training to see a difference.

David von Storch opened this 1,725-square-foot studio last month to offer 50-minute high-intensity classes that burn 800 to 1,000 calories a pop by rotating through cycling, XT suspension training straps and free weights. (With the straps, exercisers use their own body weight to build strength.) The space holds 23 participants, each of whom has their own “box,” a raised platform stocked with their class props.

“SweatBox is a boutique fitness studio that combines cardio and high-intensity interval training to get you cardiovascular strength, flexibility and cardiovascular health,” said von Storch, who also owns VIDA Fitness. “It’s a studio that allows you to get all three, and we do that by using a [Matrix IC7 Coach by Color] bike, our cycling cycle; XT Trainer straps, which is like TRX; and free weights. Our concept is everybody in the studio has their own station — their own bikes, their own straps, their own weights — and the SweatBoss, as we call them, coaches everybody at the same time through a 50-minute session.” 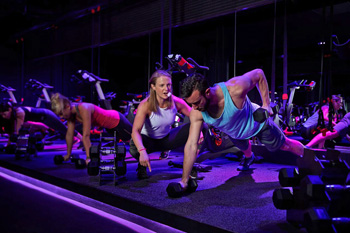 The class has no signature moves because the exercises change all the time, von Storch said. “We don’t want your body to get accustomed to any particular rhythm because that’s how you build better muscle mass and cardiovascular health,” he explained.

Still, participants can count on doing sprints and endurance work on the cycles each time. “On the floor we tend to work on strength, so it’s not ‘do as many as you can in 30 seconds’ — it’s ‘do 10 slowly in the next 30 seconds,’” von Storch said.

Participants can wear a MYZONE heart monitor, which provides real-time feedback about their workouts. The data is broadcast on a screen in the studio and can also be downloaded to a smartphone so improvement can be tracked over time. “When you’re in the studio and you’ve got the belt on, you can see how everybody in the class is performing relative to their maximum, so it’s a really great group/competitive experience,” von Storch said.

SweatBox is built on the premise of “quantifiable results and quantifiable effort,” he added. The belts provide the former; color-coded bikes fulfill the latter. They’re outfitted with LED screens that change color based on the level of output from the rider. The darkened studio also changes color when the SweatBoss shifts from cycle to straps to the floor.

Classes are open to riders of all abilities. To be summer-ready, von Storch recommends taking the classes three times a week for six weeks. 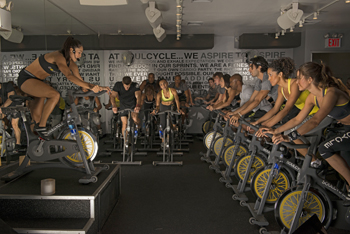 SoulCycle, which focuses exclusively on group cycling, celebrated its 10th anniversary in April.

Put the pedal to the medal at SoulCycle’s SoulSurvivor class. The chain, which focuses exclusively on group cycling, celebrated its 10th anniversary in April, and SoulSurvivor has been one of its offerings from the beginning. It’s 60 minutes long — 15 more than a typical class — giving riders just a little extra exercise push.

On a recent Saturday morning, instructor Chris Pepe had an almost full house at the Georgetown studio, which boasts nearly 60 bikes. Riders set up their bikes — with his assistance, as needed — and then he turned down the lights and cranked up the music. The class doesn’t hold back, incorporating sprints and heavier resistance levels to keep those quads, hamstrings, glutes and calves guessing. With a slight turn of the resistance knob, riders can control their intensity.

About three-quarters of the way through the class, the legs slow and riders grab light free weights tucked into baskets under their seats. For the next five minutes, they work their biceps, triceps, shoulders and chests. This is something that helps set SoulCycle apart because cycling classes at most big-box chains don’t include upper-body moves.

Open to all ability levels, SoulCycle participants can burn between 500 and 700 calories in 45 minutes. “We recommend twice a week to see significant changes in your body, but our riders tell us the physical and mental strength they feel as a result can be instantaneous,” said Gabby Etrog Cohen, senior vice president of public relations and brand strategy at SoulCycle.