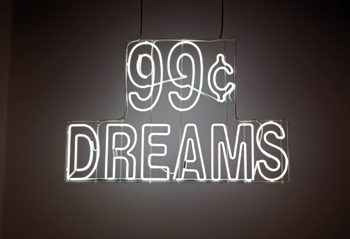 Doug Aitken’s “99 Cents Dreams,” is part of two very different shows at the Katzen Arts Center this summer, one on Mexican stereotypes and the other a brooding meditation on Irish art.

Ideally, when you go to see an exhibition at the American University’s Katzen Arts Center, you should take a backpack, lunch, and leave someone your cell phone number and a description of yourself, just in case. You may be gone longer than you think, but you probably won’t want to be found — thanks to Katzen Director Jack Rasmussen, who inevitably manages to mount exhibitions that are provoking, enriching and time consuming, and just as inevitably, exhibitions you’re not likely to see anywhere else around.

At the Katzen’s latest summer shows — “Mexico Expected/Unexpected” and “Patrick Graham: Thirty Years – The Silence Becomes the Painting” — the surprising thing is that there are essentially only two shows. Usually, there are as many as five or six at a time. And you cannot think of two more different exhibitions than “Mexico Expected/Unexpected” and “Patrick Graham.”

By its title alone, “Mexico: Expected/Unexpected,” a bottomless artistic wonderland of works culled from the Isabel and Agustín Coppel Collection, has an agenda, aiming to distill and dispel cultural clichés and stereotypes about Mexico and Mexican art, while also exploring and capitalizing on those stereotypes.

The result is a huge, almost unwieldy exhibition that spreads over two floors, slithering over walls and around corners with videos, paintings, drawings, sculptures, photographs, objects and two unforgettable on-site installations. Together, the contents are like a living being, barely contained in their setting, and while they state questions, they also raise new ones that beg answers. Trying to understand it as a total thing is like trying to kiss a three-headed hydra, dangerous, difficult, maybe impossible, but also strangely and often wildly enjoyable.

To say the Mexican exhibition is a little unfocused is an understatement. The Patrick Graham exhibition — by a contemporary Irish artist just beginning to resonate on the world stage — is so focused it hurts. If one exhibition tries to get to the heart and soul of Mexico with startling and diverse results, Graham, his own burning eyes ever present in some self-portraits, gets to the heart and soul of the Irish and their many different forms of art and afflictions.

The two exhibitions are like quixotic road trips that pick up fellow travelers along the way — one a kind of arts-and-warts “Canterbury Tales” across the Mexican landscape, with many pilgrims; the other a solitary quest into the dark, as if Don Quixote had been jolted into recognizing windmills as windmills, as opposed to ferocious giants, and he spiraled into a different sort of madness. As in Quixote, Graham touches on issues of God, faith, priests, the troubles, the drink, sex and the nightmares imbedded in his canvas.

The Mexican journey is one that starts with the commonplace: the sombrero, violent drug cartels, immigration, Mayan and Aztec imagery, Frida Kahlo, Salma Hayek and whatever else comes to mind when people think of America’s southern neighbor. 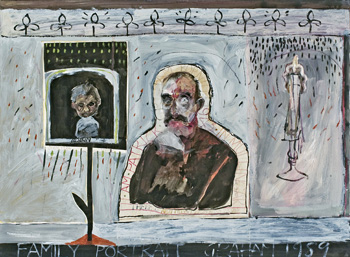 But it’s an exhausting, tantalizing and complicated mission. For one thing, a good chunk of the works on display are by artists who are not even from Mexico, such as the great American photographer Ed Ruscha from Nebraska, Rineke Dijkstra from Holland, Maurizio Cattelan from Italy, Terence Koh from China and Rivane Neuenschwander from Brazil.

Stereotypes are shattered all over the place in these genre-busting mash-ups. For instance, well-known Mexican artist Gabriel Orozco largely works and lives in Paris.

All of which is to say that the exhibition, while blazing new paths, firmly places Mexican art in today’s globalized world. You can’t always say this work or that is Mexican in style or thought, or even about Mexico per se. It’s best to just give in and embrace the show’s all-encompassing nature.

If you do, you’ll be touched by Belgian artist Francis Alÿs’s feathery whispers in a series of works that are indistinct, suggestive, sad and recognizable. You’ll be haunted by Carlos Amorales’s black and red skulls that echo certain nightmares. You’ll run into an endearing, stuffed donkey made by Maurizio Cattelan that sits expectantly in the middle of the floor. And you’ll be struck by Rineke Dijkstra’s dangerous, bruised photographs of bullfighters and attendants, their coats torn and bodies slightly battered.

But there is nothing quite like Ricardo Rendon’s onsite installation, which took two days to create, according to Rasmussen. It’s made of hundreds of dry-wall screws, spaced exactly apart, in a fluid, seemingly endless array of circles, lines, half moons and circles within circles.

“We had to stop him,” Rasmussen said. “I think they might have covered the whole building.”

In spite of the installation’s apparent exactness, it looks as if something is about to escape, a burst of shapes and magical forms about to break out of their artistic jail.

There’s nothing precise about Patrick Graham, but there is a little cliché in his art — the pain of it all. One critic wrote that “Graham’s paintings are difficult and disturbing…. They’re not easy to like.”

That’s not the half of it. There’s something deeply confessional and personal about his paintings as Graham dives into ancient inspirations, pagan landmarks and Catholic sorrows, family, fathers and his own haunted, big-eyed self. The artist described his work as “a looking-in, rather than a lived experience. That ‘looking-in on things’ has stayed with me: a self-contained art.”

Yet contained in that art is nothing less than a search for the meaning of life itself, meditations that are as thought provoking as they are disturbing. Caskets, bug-eyed men with wings, dripping blood, and nudes the color of heated-up flesh don’t exactly make for a pleasant Sunday stroll through the museum.

But you can’t help but be affected by the Irish genius for self-destruction and their demons. It’s dark, heavy and brilliant.

The Irish artist can of course write as well, describing a bog in his hometown in County Westmeath: “This is where I was thrown back and out of myself…. This is where I pray. I don’t say words. I just look and listen. It’s a prayer of wonder about nature.”

At the end of a long day at the Katzen, it’s all too easy to get lost meandering around Mexico in all its guises, or roaming County Westmeath and Graham’s murky ruminations on life and faith. But in return you find a bounty of rewards, and the only thing you’ve lost is a lot of time well spent.