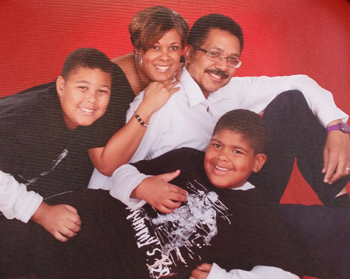 Lisa Vasciannie and her husband, Jamaican Ambassador Stephen Vasciannie, pose with their sons Sean and Dominic. The couple met while teaching at the University of the West Indies.

“Education has always been the center of my life,” said Lisa Vasciannie, the Ph.D. wife of Jamaican Ambassador Stephen Vasciannie and mother of their two boys, fourth-grader Dominic and sixth-grader Sean.

Lisa, whose doctoral thesis dealt with election observation in the Caribbean, has also observed elections in Jamaica, Guyana and the Maldives and written papers on observing international elections in the Commonwealth Caribbean. In addition, she worked as a research assistant to legendary Jamaican political scientist Trevor Munroe and was a research officer for former Jamaican Prime Minister Michael Manley.

Lisa is honest about the sacrifices of being married to an ambassador and having to put your own successful career on hiatus for the sake of diplomacy.

“It’s always a balance between professional and personal interests. For the past three years, I haven’t worked here. I have been dedicated to our children and supporting my spouse,” she told us.

“The first year here, I was almost resentful with being at home, just doing the laundry and the cooking. Then one day our older son forgot his homework. I found it and took it back to him. When he saw me in the school hall holding his paper, he looked at me like I was from Mars. That was my Eureka moment. I didn’t want to be a ‘helicopter mom,’ hovering over our two boys, but I did want to help.”

Lisa didn’t abandon the education scene altogether, finding ways she could still contribute her time. She spent a recent weekend in the Jamaican stall at Norwood School’s Multicultural Festival, for example, and also worked the 17th Food Festival of the Americas, which was held at the Organization of American States on May 17. She’s also volunteered for a variety of causes and says she has met whole new groups of people that she would never have known otherwise.

Still, “not having my family support here — my mother, father, sister and uncle — I have been apprehensive in hiring just any babysitter,” Lisa said, noting that she had her fingers crossed when Sean went on an overnight camping trip recently.

Lisa is also discovering the different parenting styles in the United States. “It has struck me how structured American children are. Things are planned so far ahead by parents — from 1:15 to 2:35 two Tuesdays from now.”

But she said the many extracurricular activities at Norwood School, located in Bethesda, Md., have allowed both of her boys to flourish and find their niche interests.

“Norwood is an oasis; everything really happens at that school. There are rigorous studies but also student art on the walls and in fifth grade, everyone has to choose a [musical] instrument,” she said, noting that 12-year-old Sean plays the tenor, alto sax and clarinet, while 10-year-old Dominic plays the piano.

“Dominic is a book worm and a performer but wants to be a scientist and a professor. Sean likes basketball and cricket but could draw all day long. The music and art here have awakened his spirit. At home they went to private Catholic schools, where you had to wear uniforms and you showed respect by not ever looking at your teacher in the eyes. It’s the opposite here,” Lisa explained. “The boys have become very self-driven — not helicopter but ‘free-range’ children. We are trying to find the balance.”

Lisa will readjust that balance again when she picks up her old teaching position at the University of the West Indies as soon as they return to Jamaica this summer.

Not only is the university where she spent her undergraduate years and earned her master’s and doctorate degrees, it is also where she and her husband first met. “We were professional colleagues,” she explained, making sure I understood that he wasn’t her boss. “He is brilliant and humble. We enjoy each other’s company.”

Stephen Vasciannie, who was appointed to Washington in 2012, also lectured at the University of the West Indies, where he was an international law professor and principal of the Norman Manley Law School.

Lisa herself has traveled extensively to participate in academic conferences and seminars and give lectures and tutorials. Her first trip away from her colorful island was to Sweden, where she went to the Cathedral School in Lund in 1989 as part of the American Field Service student-exchange program, just before she started her master’s degree in Mona.

She remembers being surprised when “my host mother who was working outside their home would put her apron on as she came through the door and make dinner. She wasn’t too sophisticated, even though she was a career woman, to do this. She also washed the clothes and raked the yard. That was a culture shock to me; in Jamaica, she would have a helper.”

When I asked her why she chose to go to Sweden of all places, Lisa had an interesting answer: “My classmates were intrigued to go all over the world but no one mentioned Sweden. I wanted to go where no one else was going. I learned Swedish and can still speak it. I learned to ride a bicycle too!”

Although she enjoyed experiencing a Nordic nation, Lisa said she is very proud of being Jamaican and appreciates the opportunity to tell her new friends here about her island home. “We have African ancestry and a mixture of backgrounds: Indian, Chinese and Lebanese. We say, ‘Out of many, one people.’ In Jamaica we don’t talk about minorities,” she said. 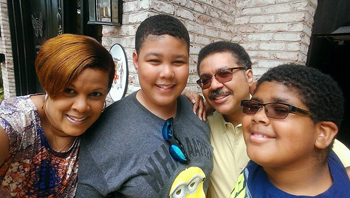 Lisa Vasciannie was a lecturer at the University of the West Indies before coming to D.C., along with her fourth-grader Dominic and sixth-grader Sean, when her husband Stephen became Jamaica’s ambassador to the U.S.

“We have a female prime minister, Portia Simpson Miller, who is serving in this top political position for the second time. We have the Bob Marley Museum and the fastest runners in the world, Shelly-Ann Fraser-Pryce and Usain Bolt. Many tourists visit our beautiful Montego Bay.

“Yes, we are ‘happy-go-lucky’ people, but we are much more than just tourism. We have wonderful artists, great authors and an important university,” she added. “Jamaica is not in Latin America or Central America. We are in the Caribbean. Caribbean people are their own subset of the Americas.

“Last summer, I took the boys home. I felt that they had been living in a bubble. I mean, life is wonderful here and they have traveled a lot, but I wanted them to be home,” Lisa explained. “The day after we arrived, we went to the beach. It was windy, there were rough seas and seaweed all over. Immediately, they rolled in the sand as if they were dropping all their anxiety.”

Lisa admitted that one of the biggest challenges in Washington, especially with her background in international relations, is being careful about speaking out on controversial global issues and making sure she is not in conflict with Jamaica’s positions.

“I’m learning to hold my tongue,” she said wryly, marveling at “how Michelle Obama has learned to gracefully restrain herself and let her husband be president.”