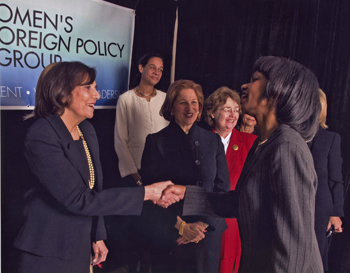 Today, as WFPG marks its 20th anniversary, the group notes that a record 27 women ambassadors and chargés d’affaires are posted to the United States — along with 23 female deputy chiefs of mission in Washington and 39 women permanent representatives to the United Nations in New York (not to mention 28 female foreign ministers and 20 female heads of state worldwide).

Ellis recalled how she and Bloch, who later became U.S. envoy to Nepal and now runs the US-China Education Trust, started the nonprofit group from her kitchen table.

“All of us were women working on foreign policy issues, mainly at the State Department, USAID, think tanks and the media,” she said. “At the time, I was a journalist with MacNeil-Lehrer, covering foreign affairs. From the very beginning, the organization was a network for women from across the foreign policy field. It wasn’t focused on any one region, issue or discipline. It was multidisciplinary and cross-sectoral — and that’s always been one of our strengths.”

These days, WFPG has more than 300 members, each of whom pay annual dues of $250. It also counts a number of Fortune 500 firms as corporate members, including Coca-Cola, General Mills, Lockheed Martin, Kellogg Co., Procter & Gamble and CH2M Hill.

No more than five men are dues-paying members, though more and more men are showing up at WFPG events, especially those that deal with substantive issues like the Middle East or the future of NATO.

From its modest headquarters at 16th and M Streets, WFPG runs an array of programs ranging from brown-bag lunches and author series to State Department briefings and embassy receptions. Dozens of ambassadors — from countries such as Japan, France, Indonesia, Italy and Britain — have participated in WFPG talks.

One of the group’s earliest speakers was Madeleine Albright, the first female U.S. secretary of state, who told WFPG members shortly after Bill Clinton’s 1996 re-election: “It used to be that the only way a woman could truly make her foreign policy views felt was by marrying a diplomat and then pouring tea on an offending ambassador’s lap.”

More recent events have featured high-profile speakers such as Brookings scholar Fiona Hill, who gave a lecture April 29 on Russian President Vladimir Putin; German Ambassador Peter Wittig, speaking May 18 on “Common Challenges of the Transatlantic Relationship”; recently appointed European Union Ambassador David O’Sullivan talking May 1 about the migrant crisis in the Mediterranean; and Roberta Jacobson, assistant secretary of state for Western Hemisphere affairs, who spoke May 13 on the recent U.S. rapprochement with Cuba. 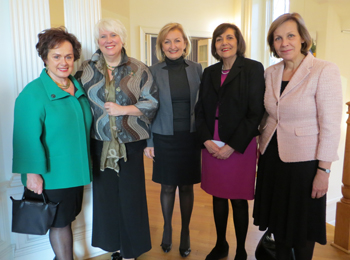 “We’ve always promoted women’s voices and women’s leadership, as well as global engagement and mentoring,” said Ellis. “We also have a very active internship program, and we do mentoring fairs every year. This is a growing area for us, and it allows us to give back to the next generation.”

Among the 27 female ambassadors and chargés d’affaires posted to Washington are Maguy Maccario Doyle and Claudia Fritsche, who represent Europe’s two smallest and wealthiest countries: Monaco and Liechtenstein, respectively.

Both women were their country’s top diplomats in New York for years before coming to Washington. Fritsche was Liechtenstein’s permanent representative to the United Nations from 1990 to 2002, the year she arrived here as ambassador. Likewise, Maccario began her career in 1976 at the Monaco Government Tourist Office in New York and was promoted to consul-general in 1997 — making her the first Monégasque woman ever to hold that position worldwide.

“There are only 8,000 of us. It’s very difficult to get Monégasque citizenship. Normally you need three generations,” said Maccario, who hosted a WFPG reception at her official residence on April 23. “On the other hand, there is no income tax, and in one square mile, we have 120 nationalities, and everyone gets along very well together.”

Fritsche, the fourth longest-serving ambassador in D.C. after Djibouti’s Roble Olhaye, Palau’s Hersey Kyota and Congo’s Faida Mitifu, said not a single woman worked in Liechtenstein’s foreign service when she started her career. 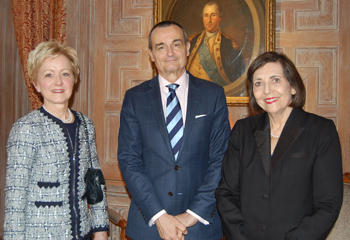 “I’m not so proud to say that Liechtenstein introduced the right for women to vote only in 1984 — not 1884 — so we had a lot to catch up on,” Fritsche said recently. “I was personal assistant to the foreign minister, which is when my interest in foreign cultures was awakened. The choice was clear, and I’ve never regretted it.”

Today, she said, 40 percent of the Alpine mini-state’s diplomats are women.

“I try to invite every newly arrived female ambassador for lunch,” said Fritsche, who’s now served in Washington for nearly 13 years. “Having been here so long, I know she probably has a very experienced staff, but there are little things you need to know that the staff can’t tell you. So I always keep my door open.”

As recently as the 1970s, according to Bloch, women made up only 4.8 percent of U.S. Foreign Service officers. The first woman to serve as an American ambassador anywhere was Eugenie Anderson, sent by President Harry Truman to Denmark in 1949. By comparison, 116 of the 367 ambassadors nominated by President Barack Obama since taking office — 31.6 percent of the total — have been women.

On June 10, WFPG will mark its 20 years of existence with an anniversary conference and luncheon at Washington’s Ritz-Carlton Hotel. The theme: “Women Leaders Making a Difference in Foreign Affairs Today and Tomorrow.”

The first segment, on the Middle East, will feature State Department and Pentagon officials and will be moderated by TV journalist Judy Woodruff. Also planned is an evening reception at the Finnish Embassy hosted by Ambassador Ritva Koukku–Ronde, Finland’s first female envoy to the U.S.; 250 people are expected to attend.

With their ranks growing every day, a few ambassadors offered some words of wisdom for other women hoping to crack the diplomatic glass ceiling.

Hunaina al-Mughairy, who’s represented the Sultanate of Oman here since 2005, said she’s not a career diplomat but rather has a background in business. That’s why the sultan sent her to Washington. At the time, Oman was negotiating a free-trade agreement with the United States.

“I went to Congress and had to lobby all 435 representatives. It opened doors, because most of them had never seen an Arab woman who was not covered and spoke English,” she said. “I was the first Arab woman ambassador to the United States, and as long as you’re professional, you can command a lot of prestige.” 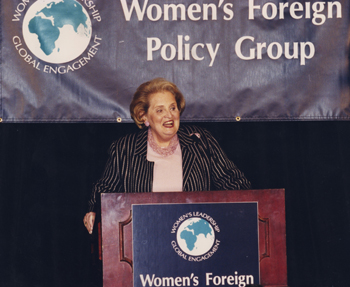 One of the Women’s Foreign Policy Group’s earliest speakers was Madeleine Albright, the first female U.S. secretary of state.

Mitifu, Congo’s envoy here since 1999, clearly remembers the day she arrived in the United States to start her new job, because the airline’s protocol staff mistakenly assumed the only other passenger sitting in business class — an older gentleman — was the new Congolese ambassador instead of herself.

“About two hours before landing, people were coming up constantly to talk to the man. Finally, when we landed, they told me to go with the other passengers,” the African diplomat recalled. “So I turned my back and went the other way. Then I heard the lady from protocol shouting, ‘Ambassador Mitifu! Ambassador Mitifu!’ So I returned and said, ‘That’s me.’ You should have seen her face. They kept apologizing, and the gentleman was confused, but very kind.”

In the years since that embarrassing snafu, Mitifu said she’s learned that “just being able to assert yourself as the ambassador or head of your diplomatic mission is always a challenge. If a man has to work 100 percent, then you have to work 150 percent. But once you reach that point, then you can be much more comfortable with yourself and everyone around you. Just do your job, be curious, explore all avenues and try to learn as much as possible — because you never know who will open doors for you.”