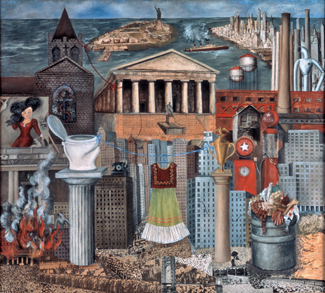 In his existentialist musings on the Mexican national character, “The Labyrinth of Solitude,” first published in 1950, the Nobel Laureate writer and diplomat Octavio Paz posits that the Mexican condition is one of particular alienation, the legacy of an identity trapped between indigenous and colonial influences.

Today, more than 60 years later, certain ideas of Paz still resonate. Though a 2010 Economist magazine cover featured an inverted map of the Western Hemisphere with the title “Nobody’s backyard,” discussing the rise of Latin America and “the need for a new attitude north of the Rio Grande” to recognize that rise, the mood in some Latin countries is far from upbeat. In fact, there remains a palpable distance between the countries north and south of the Rio Grande.

Globalization, economic growth, political changes and lingering problems such as drug violence all continue to impact the psyche of present-day Mexico and, more broadly, Latin America. So to take a serious look at the region today is to realize the need to reassess certain notions about it — and just as in the “Labyrinth” era, “It is a moment of reflective repose.”

Offering a timely moment for such reflection is the exhibition “Beyond the Labyrinth” at the Mexican Cultural Institute. Featuring 50 disparate works by some of the best-known Latin American artists from the past century, from Frida Kahlo to Fernando Botero, the exhibition asks viewers to question their preconceptions about the meaning of “Latin American art” and its relationship to the wider world of Western art.

“Beyond defining the region’s cultural or artistic ‘identity’ as subject to a perennial sense of dislocation or marginalization as suggested by Paz’s writings, ‘Beyond the Labyrinth’ suggests the rich and dynamic role artists from Latin America have played in the discourse and development of key aspects of modernism, and their ever growing presence in the contemporary art field on a global stage,” she said.

Organized into six thematic sections, the exhibition’s impressive breadth is drawn from the FEMSA Collection, one of the world’s largest collections of art from Mexico and Latin America, with more than 1,000 works. FEMSA owns and operates Mexico’s largest chain of convenience stores under the OXXO brand, and is the largest independent bottler of Coca-Cola products in the world as well as the second largest stakeholder in Heineken. 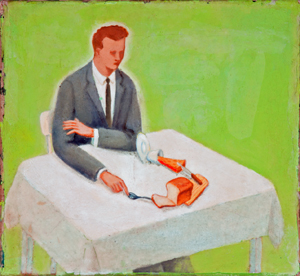 The diverse roster of artists plucked from the collection includes Diego Rivera, Frida Kahlo, Dr. Atl, Rufino Tamayo (all from Mexico), Roberto Matta (Chile), Wifredo Lam (Cuba), Joaquín Torres García (Uruguay), Jesús Rafael Soto and Armando Reverón (Venezuela), to name a few. After being invited by FEMSA to develop the exhibition for the Mexican Cultural Institute in Washington, independent curator Nieves, based in New York, said she soon saw how the artworks could be arranged in a cohesive manner.

“As soon as I began studying the collection the concept quickly took shape,” she said. “Particularly the presence of key modernist works by Tamayo, Kahlo, Torres-Garcia, Reverón and Rivera helped solidify my approach, which was to use this remarkable collection to explore profound developments and exchanges that have occurred throughout the history of modern and contemporary art.”

The exhibition begins on the first floor with a room devoted to “Cubism and Other Early Modernist Tendencies,” moves through “Surrealism” and “The Social and Physical Landscape,” to “Constructivism and Abstraction,” then continues on the fourth floor with “Postwar Figuration and Neo-Expressionism” and finally, “Contemporary Art and the New Millennium.”

Works by famous artists such as Diego Rivera and his wife Frida Kahlo are particularly intriguing because they represent lesser-known aspects of their repertoire: Rivera’s cubist “El grande de España (El ángel azul)” dates from 1914 to his sojourn in Europe, as he was developing ideas that would influence his later period as a muralist. Kahlo’s “Mi vestido cuelga aqui (My dress hangs there),” painted in New York in 1933, is not one of her iconic self-portraits, but rather a surrealist-inspired collage filled with symbolic references from her subconscious.

Beyond these famous names, exhibition-goers will discover captivating works by artists such as Spanish-born Remedios Varo, whose 1958 surrealist “Papilla estelar,” or “star pap” is sure to spark conversation, or Fernando Botero, a Colombian artist inspired by the Italian Renaissance whose 1977 painting “Santa Rosa de Lima” portrays a voluptuous nun wearing a necklace of pearls.

Though selecting a favorite work may be a futile endeavor, curator Nieves said she could identify one “that really synthesizes the main objectives of the exhibition” — Rufino Tamayo’s “New York from the Terrace,” painted in 1937.

“Stylistically the painting combines aspects of European vanguard practices such as surrealism and synthetic cubism along with elements of Mexican modernism, so it essentially demonstrates Tamayo’s desire to position himself with respect to these different influences and to somehow define a pictorial and stylistic language of his own,” Nieves said.

Beyond the Labyrinth: Latin American Art and the FEMSA Collection