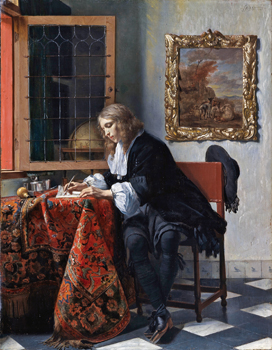 Pity Gabriel Metsu. The Dutch artist died young at the age of 38 in 1667 — at the height of a career that took place at the height of the prosperous Dutch Republic, whose daily life Metsu captured with stunning skill.

But unlike his better-known contemporaries such as Rembrandt van Rijn (who, considerably older, died two years after Metsu) and Johannes Vermeer, Metsu never really re-emerged as a household artistic name.

An exhibition of 33 paintings now at the National Gallery of Art proves without doubt how patently unfair his fate was. Then again, something similar happened to Vermeer, the god of holy light whose reputation in 19th-century Europe was buried among other dead artists. It took 20th-century critics, and perhaps a scarcity of his work, to lift Vermeer into the pantheon of Dutch sun gods.

“A Man Writing a Letter” by Gabriel Metsu

Yet in his lifetime, Metsu was very much a success story — he was even most likely a prodigy, having been referred to as a “painter” around 1644 when he was only 14 or 15 years old and registering four years later as a master in the artistic Guild of Saint Luke in his native Leiden. Metsu’s reputation in fact was certainly as high or better than Vermeer’s in his time, along the lines of Gerrit Dou and Gerard ter Borch, who, like Metsu, were noted for their genre work in their lifetimes.

Incidentally, the National Gallery has hosted exhibitions on Dou and Borch, not to mention the blockbuster exhibition on Vermeer during the government shutdown in the Clinton years. The Dou and Borch exhibitions were interesting surveys of two painters whose reputations lost considerable luster in the artistic afterlife.

Metsu was influenced by both men, as well as Vermeer — an imprint that shows in some of the paintings in this exhibition. But what sets Metsu apart is an originality that endures today as a compelling visual narrative of 17th-century Dutch life.

Even though not much biographical material is available on his life, we do know something about the times and economic and social culture in which he lived, as well as about the paintings of the Dutch Golden Age. Metsu made sure of that in several ways: by putting himself in many of his paintings as the sole subject or as part of the scene, by portraying his wife in many more works, and by masterfully capturing the nuances of the urban landscape around him, notably Amsterdam. In the process, he used innovative techniques that distinguished him from the crowd and allowed him to depict sometimes-common scenes with uncommon emotion, nuance and individuality.

Metsu is now recognized for his so-called genre paintings of life in Dutch cities, towns and countryside, as well as the odd religious painting. In his scenes of courtship, busy markets and quiet home settings, he seems to be doing what other painters were doing — works that sold like hot cakes. The Dutch flourished during his lifetime, and, just as people would today, the high-flying members of the merchant class filled their homes with all sorts of stuff to show off their success. Metsu, like many of his contemporaries, did well for himself — which in turn allowed him to move into the ranks of the upper social elite. In short, his paintings sold very well.

Today, you can still see why. In works such as “A Man Writing a Letter,” which stands next to “A Woman Reading a Letter,” we discover the serenity of leisure. The tranquil subject matter seems to be influenced by Vermeer, and how he used light, but there’s a difference. You can say a lot about what happens in Metsu’s paintings, but ethereal wouldn’t be one of the words you used.

Metsu’s colors and lights have a smudgy, energetic feel to them. They focus on the humanity of the faces, in all their imperfections, as opposed to any aspirations toward the ideal. The genre scenes feel lively, full of living people and a realism that echoes the way impressionists would uncover the essence of a still life subject by stripping it of details. 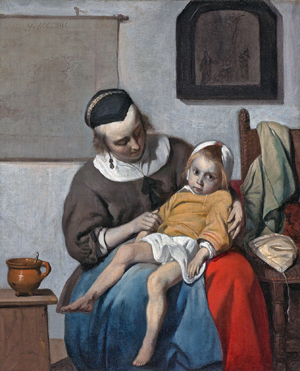 Gabriel Metsu skillfully captured daily Dutch life in the 17th century, in all its beauty and banality, as seen in works such as “The Sick Child.”

His talents are particularly evident in “The Sick Child,” which isn’t burnished by any attempt to make the subject heartbreaking. There’s light here but it is revealing as opposed to sentimental or holy.

This isn’t to say that Metsu’s genre paintings aren’t detailed, but they’re detailed in the way that short stories serve as preludes to lengthy novels. Here, wooden baskets, women’s hats, fishes, flowers, the constant presence of dogs and cats, as well as chickens are part of a larger story — suggesting the interactions of the day. For instance, we see a hunter dropping off a rabbit for a single woman (a gesture that was apparently a kind of erotic come-on back in the Dutch day), who reaches for her Bible, eying the handsome hunter in a quandary. “An Old Couple Feeding a Dog” suggests that the couple is nearing the end of their lives, with their faithful animal companion by their sides.

Metsu seems in tune with the world in which he lived, observing it relentlessly like a true artist would and recreating it in his paintings. Maybe we should leave questions of genius, who’s number one or two, out of the discussion when it comes to his work. If one of the characteristics of genius is a recognizable uniqueness, then Metsu fits the bill. He wasn’t a lesser Vermeer or a better Vermeer. He was Metsu, and no one else was.

National Gallery of Art
on the National Mall between 3rd and 9th Streets at Constitution Avenue, NW