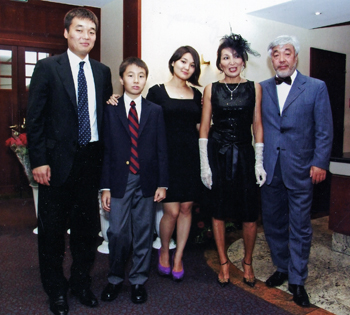 First, you notice the high cheekbones, then her wide-set big brown eyes, and a sculptured, chiseled face with almost no lines. The look is timeless yet exotic, and quite mesmerizing. You think she could be a model from a distant land.

From right, Ambassador of Kazakhstan Erlan Idrissov and his wife Nurilla Idrissova pose with their three children: Aigerim, Aljan and Daniar. Aljan remains in Washington with his parents while his older siblings live and work in Kazakhstan’s capital city of Almaty.

She is a model but not for the runway or camera lens. Nurilla Idrissova is an important role model for the wives of the young diplomats helping her husband, Ambassador Erlan Idrissov, tell Kazakhstan’s unique story in America. She is also the mother of their three children, ages 28 to 12, and a devoted disciple of feng shui and yoga to nurture and nourish her inner beauty.

“Since we are all away from our family and friends in Kazakhstan, we have created an extended family among ourselves at the embassy here,” she explained over tea at their new residence on Edgevale Terrace, NW. “My husband and I were pretty young, only 22, when we first went abroad and so we understand and know how hard it is. I have sort of adopted these diplomatic wives and their children.

“This group of women get together every month or even more often sometimes,” she continued. “I plan trips to different art galleries and attractions and we visit in each other’s homes.”

Every summer, when many Kazakhs come to the United States to visit their relatives working at the embassy in Washington, Nurilla and her husband also arrange a huge all-day picnic for the embassy’s extended family.

Last year, this inventive diplomatic spouse created an electronic magazine that is produced each month by one of the members of her embassy group. Among the topics are hints on how to prepare for Kazakhstan’s traditional holidays and advice on how to save money while in Washington and where to get the best bargain vacations in the United States.

One of those young diplomats from the Kazakh Embassy, Meruyert Saudabay, who was on hand to help translate during our interview, brought all the issues from the magazine’s first year. Computer-generated, each issue features an inviting cover, colorful artwork and photos, and plenty of clever copy.

Now, with only 12-year-old Aljan at home, Nurilla feels that being the embassy’s “den mother” is her main job. She noted that one of the difficulties in Kazakhstan’s large embassies in Russia and the United States “is that our diplomats and staff are so young and this is often their first job abroad. They don’t know their way around and often their spouses arrive here not speaking English. I try to make them feel at home,” with this support group.

The Idrissovs themselves have been posted to many places, beginning in Moscow, where Erlan Idrissov studied international relations, English, Urdu, Hindi and French at the Moscow State Institute of International Relations of what was then the Soviet Union’s Ministry of Foreign Affairs.

Their first foreign diplomatic assignment came in 1992 when the family moved to the United States while he was posted as first secretary in Kazakhstan’s Permanent Mission to the United Nations.

At that point, the family moved to London where he served as his country’s top envoy to the Court of St. James, also becoming ambassador to Norway, Sweden and Ireland, with residency in London. Since July 2007, the couple has made Washington their home away from home.

Ambassador of Kazakhstan Erlan Idrissov and his wife Nurilla Idrissova ride in a carriage en route to present his credentials to the Court of St. James in London.

“When we arrived in Washington five years ago, our son spoke no English. It took him one year to learn, just going to an English-speaking school. He was quiet the whole year and it was hard and lonely for him — no other Central Asian students and not even a Russian-speaking student,” Nurilla recalled. “But he learned and now he speaks better than I do,” said this proud mother.

Their middle child, Aigerim, now 25, lives and works in Kazakhstan’s new capital city Almaty as a freelance concept designer, illustrator and art director at a private advertising agency, after having studies at the University of London’s Central Saint Martins College of Art and Design.

Her older brother Daniar graduated from the Royal Holloway College at the University of London in 2005 and is currently putting his economics degree to good use, working with several different Almaty companies that are involved in foreign investments and private equity businesses.

As we talked, I realized that a whole new person was unfolding in front of me. When we’d met before on the diplomatic circuit, we always smiled but didn’t talk much. The ambassador always glowed when he spoke of his wife, but he also told me that he often attended events alone because his wife had a hearing problem, especially in large, noisy crowds.

So I asked her if it has been difficult to participate in diplomatic life, especially where neither her native language nor Russian are mostly spoken.

“Yes, having a hearing problem and trying to speak in English and being surrounded by English is difficult for me,” she said. “Seven years ago, I woke up one morning and I noticed one eye was red. Then, I realized that I couldn’t hear anything out of that ear. One year later to the date, the same thing happened with the other ear,” she explained.

“I wear a hearing aid but in crowded places where it’s very noisy, it is hard for me. I come home with a terrible headache. When I watch TV, it helps if I use a headset. At live concerts, I can hear the music but the melody is in a different form that what I may remember from hearing it before I lost most of my hearing.

“I have been to doctors everywhere — in China, London, Ukraine, Johns Hopkins in Baltimore, and each one says there is nothing else to be done. Someday, I hope I will find someone who will give me hope and have a [different] answer.”

For now though, Nurilla does relish diplomatic life, which she admits can be difficult but extremely rewarding.

“It’s always nice to see a new country, new culture,” she said. “These experiences enrich our souls. I like to see the positive side of people and take those impressions back home. That’s one of my jobs here as wife of the ambassador…. I’m not trying to look for anything negative. My husband and I have respect for the local culture and appreciate many things about your government, like the Disabilities Act [of 1990],” she noted.

“Of course, it is anyone’s dream to come to America. It is still the number-one country politically, economically, strategically, and you are rich also in human resources. We love seeing all the different regions with their own climate and nature. America is a beautiful country and we love to travel around, especially driving ourselves on car trips. We have been to Los Angeles, Boston, New York, Salt Lake City, San Francisco, Chicago and Miami.”

Clearly well-traveled, Nurilla is also well-coiffed and well-dressed. She is undeniably striking, so we discussed how she keeps so trim.

“My style is to never follow the fashion trends or other people,” Nurilla continued. “You must dress according to your lifestyle, status, age and body structure. It’s not important what brand anything is, just that it suits you.”

“Especially when you are older, beauty is part of your success,” she added. “Your inside beauty is fed by taking care of yourself and staying in shape. You must love yourself and love whatever you do. Always be yourself — never look back…. I tell our women that it is not healthy to have huge illusions; it is best to live for today. That way you have the best experiences, whatever you are doing at that particular moment.”