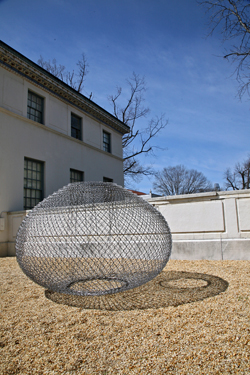 Separated by just 40 miles on the map, the cities of Baltimore, Md., and Washington, D.C., often seem much further apart. It’s not just the lack of convenient transportation options between them. Rather, the similarly-sized mid-Atlantic cities seem to cherish their mutual aloofness, like two siblings who never really could relate.

John Ruppert’s chain-link sculpture “Gourd,” graces the lawn outside the Art Museum of the Americas.

The cities’ artist communities, each with an identity tied to its respective urban environment, remain similarly distant. Baltimore, known for its gritty blue-collar vibe, factory remnants and warehouse spaces — which make for relatively cheap studio space to cash-strapped artists — serves as a foil to D.C., where rents tend to be higher and workspace scarcer, despite a plethora of world-renowned museums and galleries.

With this in mind, three Baltimore-based artists got together a year and half ago to bridge the divide with an exhibition that would bring the two artist communities, and with them their two cities, closer together. The exhibition “Corridor,” a reference to the I-95 highway linking Baltimore and D.C., features the work of 12 artists, six from each city, within the historic surroundings of the 1912 Spanish colonial-style Art Museum of the Americas — originally designed as the residence for the secretaries-general of the Organization of American States.

Veering from its usual focus on Latin art, the museum goes local for this compelling show, highlighting some of the leading talents in the region. But Laura Roulet, who co-curated the exhibit with her colleague Irene Hofmann, said it highlighted “not regional artists, but exceptional artists who happen to be based in the region.”

“The show is about networking, about connections between artists,” Roulet said. “We saw some threads we wanted to bring out, to create a pathway for the viewer.”

Despite the decisive role played by Roulet and Hofmann in selecting and organizing the artwork, “Corridor” represents a departure from the traditional artist-curator dynamic in that the three original artists — Bernhard Hildebrandt, Soledad Salamé and Joyce J. Scott — assumed the role of curators, selecting three D.C.-based artists to be included in the show. At that point, each artist in that group of six chose one additional artist, for a total of 12.

Only then, with the artists selected, were the curators invited to visit their studios, pick out individual pieces, and design the exhibition’s layout and catalogue. Adding to this curatorial “cross-pollination, D.C.-based curator Roulet worked with the Baltimore-based artists, while Hofmann, then director of the Contemporary Museum in Baltimore, worked with the D.C. artists.

The result is an eye-opening experience that reflects the area’s artistic depth as well as its regional demographics, as the curators write in their forthcoming exhibition catalogue. They note the even share of men and women represented in the show, and the fact that one third are African American and one quarter are Latina. “As curators, we were intrigued by the artists’ choices of each other,” Roulet and Hofmann write. “Was the desire to include another artist based on stylistic affinities, media, gender, ethnicity, mentor relationships?”

Even as they represent their respective cities, the artists tackle universal themes in a variety of three-dimensional and two-dimensional media that do not immediately identify them as being from either Baltimore or D.C.

Entering the museum, tucked between the imposing edifices of the Organization of American States and Department of the Interior, one first encounters digital, monochromatic prints made by Hildebrand, who drew on full-body scanner images of the human body taken at many U.S. airports that echo much earlier work by Eadweard Muybridge and Leonardo da Vinci. Inspired by the history and function of photography, Hildebrand seems to ask whether the body images produced by the controversial TSA scanners in the name of security are capable of elevating the high-tech human form to the level of high art.

The other artist featured in the room, Phil Nesmith, now based in Richmond, Va., but representing D.C. for the purposes of the show, is similarly interested in the historic photographic methods of artists such as Man Ray, whose innovations with direct image-making pushed the boundaries of photography as an art form. In Nesmith’s “Flight Patterns” series, flying creatures such as birds, bats and insects are captured and bottled, both in antique jars and containers, as well as in time through the chosen medium of sepia-toned photograms. 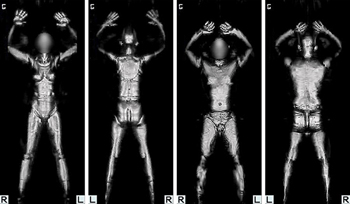 The title of Bernhard Hildebrandt’s “L3” series of digital, monochromatic prints references the manufacturer of the most widely used model of whole-body scanners controversially adopted by American airports.

The exhibit itself travels the relatively short space between two cities that are home to such a range of artistic offerings. And because the museum space itself is relatively small, visitors won’t have to rush through to see all of the diverse works that make up the exhibition’s two floors.

They may want to linger on the curving staircase, where the fanciful, intricately adorned “spirit bottles” of Baltimore native Oletha DeVane stand guard in the alcoves, or meander through the lovely formal garden to contemplate John Ruppert’s “River Jacks,” a series of cast-metal boulders set alongside an original granite one, or his chain-link sculpture “Gourd,” which mimics a natural form with overtly manmade materials.

The Art Museum of the Americas is one of those hidden gems that many people who have lived in Washington for years have yet to see. “Corridor” provides an ideal opportunity to make the trip to this intimate cultural venue while deepening one’s knowledge of the region’s impressive artistic talent, whichever span of I-95 you land on.