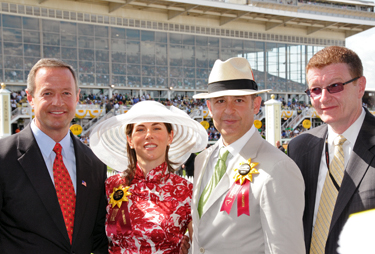 Shackleford stole the show — and the Triple Crown from Kentucky Derby winner Animal Kingdom — to take the 136th Preakness Stakes at Pimlico Race Course in Baltimore, Md., claiming the $1 million prize with half a length to spare at the finish line.

As the colt sweat his way to victory, against 12-1 odds, onlookers kept cool and dry in the air-conditioned International Pavilion inside the racetrack at the Corporate Village, where visitors paid $575 apiece to enjoy themed tents in the grassy infield.

From left, Maryland Gov. Martin O’Malley, Mrs. and Ambassador of Mexico Arturo Sarukhan, and President and Chief Executive Officer of the Maryland Jockey Club Thomas Chuckas Jr. stand at the International Pavilion, hosted by the Mexican Embassy, at the 136th Preakness Stakes in Baltimore, Md.

Following the success of the inaugural International Pavilion in 2010 hosted by the Spanish Ambassador Jorge Dezcallar, this year’s pavilion was hosted by the Mexican Embassy. Ambassador Arturo Sarukhan, who donned a casual beige suit for the occasion, joined Maryland Gov. Martin O’Malley and others in the large, seated tent, where guests feasted on Mexican specialties such as chicken ancho chile and various tequila concoctions.

Although only in its second year, the pavilion has become a highlight of the Corporate Village and a key element in the larger campaign to attract more diplomats and dignitaries to the Preakness, the second race in the Triple Crown and a big moneymaker for the state of Maryland and its cash-strapped horseracing industry.

The effort seems to be paying off: This year’s Preakness drew more than 107,000, the sixth-largest crowd in Preakness history and the biggest since officials had barred fans from bringing their own alcohol into the track.

The drive to attract a bigger turnout, in fact, has produced a strange dichotomy of clientele. Ambassadors and socialites in striking hats hobnobbed at the International Pavilion, which had a direct view of the finish line, while other tents offered tastings of single-malt scotch and complimentary makeovers.

Meanwhile, not too far away, patrons paid $60 to enjoy all-you-can-drink beer, goaded by a marketing campaign featuring an infield mascot named Kegasus, a half-horse, half-man with a full beer belly.

As Robert McCartney pointed out in a Washington Post article: “It’s no surprise that our society is split by class and caste. But it’s rare to see the divisions so clearly on display in such a small space as they are at the Preakness,” he wrote, although he gave credit to the Maryland Jockey Club, the Preakness organizers, for expanding the vision, and profits, of a pivotal event that helps to sustain horseracing in Maryland. “They’ve managed to pitch the race successfully to corporate executives and working people.”

Fans of all backgrounds seemed to be relishing the race, held on a gorgeous Saturday on May 21. And plans are already in the works for next year’s pavilion.

Anna Gawel is managing editor of The Washington Diplomat and news columnist of the Diplomatic Pouch.