This past July 28 marked 100 years since the United States recognized the sovereignty of Latvia, a West Virginia-sized nation that only in 1991 regained its independence from the Kremlin.

Along with neighboring Lithuania and Estonia, Latvia has since surged economically and politically ahead of the rest of the ex-Soviet Union. It now ranks 21st on the World Population Review’s 2022 Human Freedom Index, 36th on Transparency International’s 2021 Corruption Perceptions Index, and 2nd on the 2021 Hologic Global Women’s Health Index.

Latvian Ambassador Māris Selga said his country has had an uninterrupted diplomatic presence in Washington ever since its first ambassador arrived here in September 1922, four years after Latvia itself proclaimed independence in the aftermath of World War I.

The 100th anniversary of bilateral relations has been a focus of embassy-sponsored celebrations all this year, including a Nov. 11 Veterans Day memorial service at the Latvian Lutheran Church of DC, and an Oct. 15 concert by the Baltic Jazz Trio at Washington’s Kennedy Center.

“There was always an ambassador here, thanks to the State Department’s policy of not recognizing the Soviet occupation of the Baltic states,” said Selga, who’s represented Latvia in the nation’s capital since September 2019.

Selga, 56, spoke to The Washington Diplomat during a recent interview at his embassy fronting Massachusetts Avenue. He acknowledged these are difficult times for smaller nations such as his living in the shadow of Vladimir Putin’s Russia.

“When I was growing up, especially toward the end of the ‘60s and early ‘70s, Latvians were glued to the radio, listening to the Voice of America,” he said. “I entered university in the Soviet Union and graduated in a free Latvia.”

In 1994, he joined Latvia’s Foreign Service, where he held various positions including counselor at the Policy Planning Group, head of the Americas Division, counselor for security issues, director of the Second Political (Bilateral) Department, and director-general of the Consular and Diplomatic Facilities Directorate. 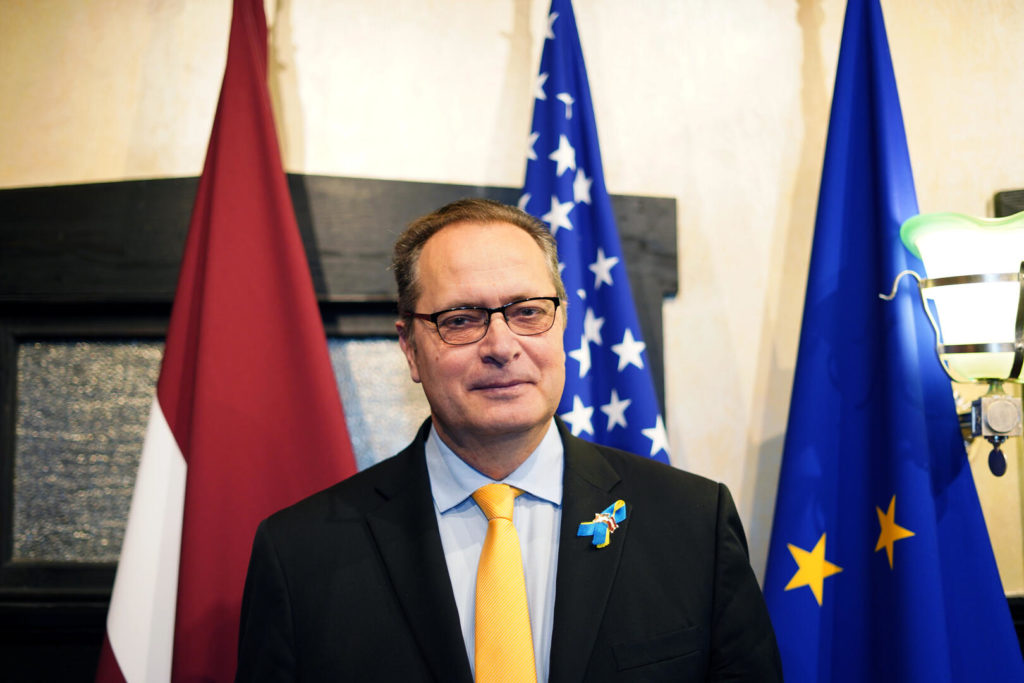 Selga has previously been posted to Latvian missions in Copenhagen and in Washington. He was Latvia’s first residing ambassador in Egypt, with non-resident accreditation to Jordan and the United Arab Emirates. He was also an observer in both the African Union and the Arab League.

The ambassador is a graduate of the University of Latvia’s Faculty of History and Philosophy. Before coming to Washington, he was Latvia’s ambassador to China, with non-resident accreditation to Mongolia and Vietnam.

Despite the fact that 25% of Latvia’s people are ethnic Russians, Selga said public sympathies are clearly with Ukraine.

“Russia, a member of the UN Security Council, decided to start a war against a democratic and free country, just because of stupid accusations of Nazis. Even Russians are not using this terminology anymore,” he said. “Average Latvians would say it’s a ridiculous accusation. During Soviet times, the Russians always used this fascism as propaganda against the Baltics. They are say we’re rewriting history, but we’re not trying to escape history.”

Some would argue otherwise. In fact, Jewish groups strongly opposed a march earlier this year in Riga to honor veterans of the Latvian Legion, which was commanded by the Nazi Waffen-SS during World War II.

It is an undisputable fact that of Latvia’s 93,000 Jews prior to the Holocaust, about 70,000 were deported and murdered in Nazi concentration camps—often with enthusiastic help from the Latvians themselves. In February, the government passed a Holocaust restitution bill that provides $45 million in compensation to the country’s 9,500 Jews for lost property.

“Yes of course, there was collaboration. Nobody’s denying that,” Selga conceded. “But was it really Latvia? We were occupied by the Soviet Union. The war arrived on our territory in 1941.” 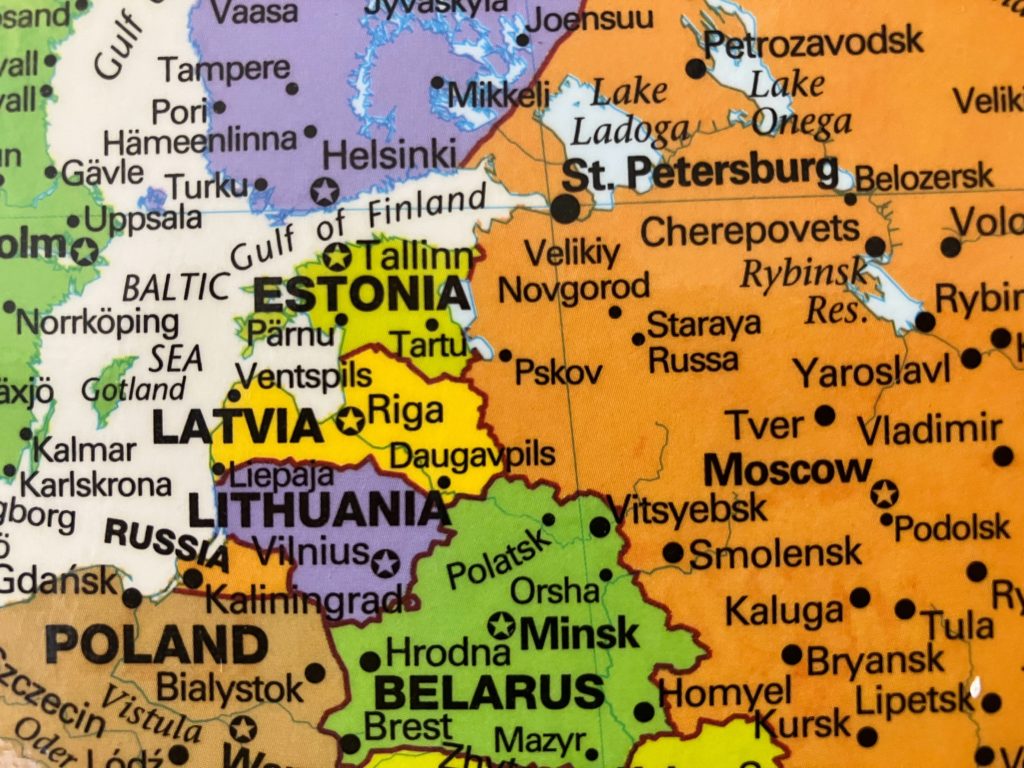 At any rate, he said, nothing justifies the suffering Russia has inflicted on Ukraine since it invaded its neighbor on Feb. 24, 2022.

“They don’t even call this a war. It’s a ‘special military operation.’ Russia claims this is their territory,” Selga told The Diplomat. “But if you look back at history, before the United Nations there was the League of Nations. And Russia is doing the same thing it did in 1939, when it started a winter war against Finland and was expelled from the League of Nations.”

Under the current scenario, Russia cannot be expelled from the UN because it has veto power. But the March 2, 2022, resolution condemning Russia for its action won overwhelming support in the UN General Assembly, passing by a vote of 141-5, with 35 absentions.

Asked if the Biden administration has done enough to help Ukraine, he replied: “Yes. Without the leadership of the United States, we wouldn’t be where we are at the moment.”

Since the start of the war, the US government has committed $18.6 billion in military assistance to the Zelensky government, more than the EU. As Finland’s prime minister, Sanna Marin, said during a recent visit to Australia, “I must be brutally honest with you. Europe isn’t strong enough right now. We would be in trouble without the United States.”

However, in terms of per-capita economic assistance, he said, no country has done more than Latvia, which has spent 0.9% of its GDP on assistance to Ukraine. That compares to Estonia (0.8%), Poland (0.5%), Lithuania (0.2%) and Slovakia (0.2%). The US has also spent 0.2% of its GDP on Ukraine aid, with billions of dollars more on the way.

Latvia has also taken in 40,000 Ukrainian refugees, a considerable amount considering the country’s population of only 1.9 million.

“Having being occupied by the USSR for over 50 years, we know how it works, when someone forces you out of your home,” he said. “There has been huge support at the government level. There have also been changes in the law regarding language use. Normally you have to learn Latvian, but there are now exceptions for Ukrainians. We’ve also given them the possibility to apply for jobs.” 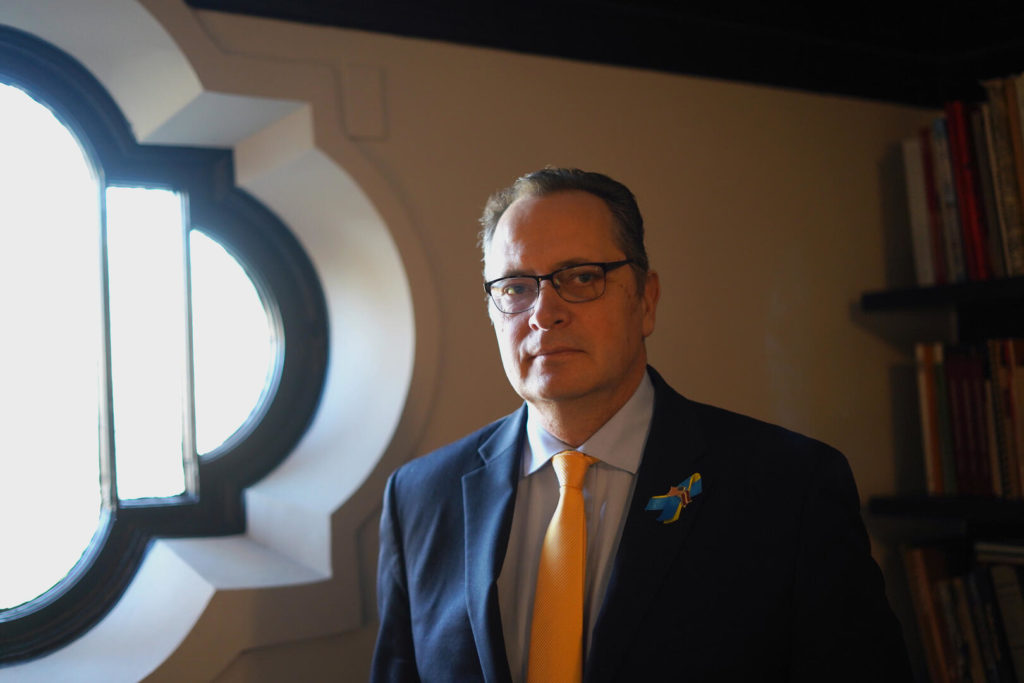 Selga: ‘We are safe, because we belong to NATO’

Recent news reports have suggested that President Biden is willing to meet Putin if Russia agrees to end the war. This development comes as a new Congress is set to be sworn in, with a narrow Republican majority in the House of Representatives and the Senate still in Democratic control.

Yet the Kremlin says it won’t talk to the Americans unless they recognize Russian sovereignty over four regions of Ukraine that Russia illegally annexed without controlling any of them.

“There has to be a diplomatic solution, but it is, it has to be on Ukrainian terms,” said Selga. “Neither the Latvians nor the Americans can tell them what to do. We cannot dictate to Ukraine. They are fighting an authoritarian regime.”

And how does Latvia counter Russian propaganda?

“We jam the signals,” he said matter-of-factly. “We have blocked all Russian-language media. The reason Russian-speaking Latvian citizens watch TV broadcasts from Moscow is simple: Russian TV has more money, so they can create shows, soap operas and other programming.”

Meanwhile, Latvia worries about its security, of course. But as Selga said, “we are safe because we belong to NATO and the EU. That’s why we joined these organizations, and we believe in Article 5.”  That refers to the clause that an attack on one NATO member is treated as an attack on all of them.

Asked what he thinks about the expansion of NATO to Finland and Sweden—which will bring membership in the 73-year-old alliance to 32—Selga smiled.

“Instead of ‘Finlandization,’ Putin got NATO-ization,” he said. “I think for the region this is very good news. Finland and Sweden have been NATO partner states for a long time. Their presence is nothing new. But having Sweden giving up 200 years of neutrality, I don’t think Moscow could have imagined this happening.”