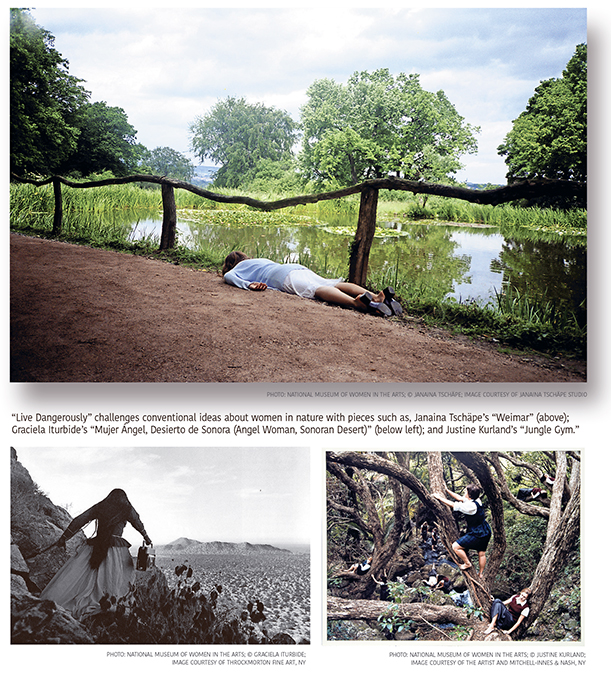 In “Live Dangerously,” now at the National Museum of Women in the Arts, humor and menace coexist in a show that challenges assumptions about a woman’s place in nature.

The exhibition, which features the work of 12 photographers, takes a number of chances by positioning the female body in provocative poses — some resembling corpses — against natural backdrops in its attempt to rethink traditional depictions of women passively occupying the environment around them.

“The inspiration behind ‘Live Dangerously’ was two-fold: to highlight NMWA’s extensive collection of modern and contemporary photography, particularly landscape photography by women, and also to exhibit the entire ‘100 Little Deaths’ by Janaina Tschäpe for the first time,” Orin Zahra, the museum’s assistant curator, told The Washington Diplomat.

The female body as a structural element serves as the effective thread to tie together the selected images into a largely cohesive show.

“From there, we asked ourselves what other works in the collection might form a dialogue with Janaina’s powerful body of work. As the exhibition started to shape up, we saw that women artists approached the idea of female bodies interacting with — and often disrupting — their built environments in ways that were fresh, innovative, witty and subversive. We wanted to show this very traditional genre of women in nature through the contemporary female gaze,” she added.

The exhibition aims to disrupt accepted notions of a woman’s place in the natural world, and does so with prints that are crisp, vivid and varied. The “100 Little Deaths” series is the unquestionable showstopper, with incredibly compelling images that fill the walls without any identifying captions — a bold, and effective, decision by the curators to keep the focus on these prints.

“The curators really wanted this to be an awe-inspiring visual experience of entering the space and being surrounded by 100 large-scale images. We wanted the feeling to be similar to encountering a sublime landscape. We didn’t want to break the continuous flow of the images with individual texts,” Zahra said, adding that it also made logistical sense given that the legibility of any wall text would have been difficult in the selected display.

This choice also yields different experiences upon visiting the exhibition. At first glance, the series comes across almost like a commentary on the true crime phenomenon where women can so often exist in these spaces as only dead, faceless forms. Do the women belong here at all? What is the artist conveying about the existence of women in spaces where they clearly don’t belong? What did “living dangerously” mean for row after row of these women photographed around the world? Is this, as the museum suggests, a way for the German artist to contemplate her own mortality and eventual passing from the earthly realm? It’s jarring, and strange, and demands repeated viewings.

Another pass through the exhibition builds humor into the threat that seeps through every image, something Zahra says was entirely intentional by the artist.

“What’s wonderful about this body of work is that it can be and has been read in different contexts. Seeing one image of a woman lying in the middle of a beach or road can seem startling and terrifying, but seeing 100 of them one after another becomes performative, often even humorous, which was absolutely her intention,” Zahra said in an email. “Janaina herself was influenced by 19th-century German Romanticism and the idea of the lone man contemplating his existence in the face of nature. Here, we have the lone woman in these various natural settings contemplating her life — and death.”

That feeling of the comic mixing with the ominous is also apparent in Anna Gaskell’s “untitled #4 (A Short Story of Happenstance),” a delightfully kooky photograph that flips the viewer, and the subject, on their head.

While the show offers several other connective threads, what makes it worth the trip are the variety of images on display. Along with a woman’s place in nature, the works on display often feel connected through environmental concerns and an interest in folklore and mythology. Alongside Tschäpe’s mysterious, lifeless forms we see women blending, dominating and playing with the landscape around them.

Dana Hoey’s “Phoenix” features one of the youngest subjects, a girl photographed as seemingly part of a large tree, only just emerging from the leaves. Mexican photographer Graciela Iturbide’s “Mujer ángel, Desierto de Sonora (Angel Woman, Sonoran Desert)” is incredibly evocative, with its stunning black-and-white imagery of the desert locale and a Seri woman in traditional garb holding a boombox. The contemporary works by Lebanese-Palestinian-American photographer Rania Matar, produced this year for her series “She,” put her early 20s-something subjects in unforgiving landscapes.

Going full circle from “100 Little Deaths,” the show concludes with more active expressions of women in the natural world, with Justine Kurland’s “Smoke Bombs” and “Jungle Gym” standing out. These staged photographs speak to the exhibition’s sense of danger and freedom — here, to climb, or play with fire — for women who are changing and exploring their environment in surprising, funny, startling ways.