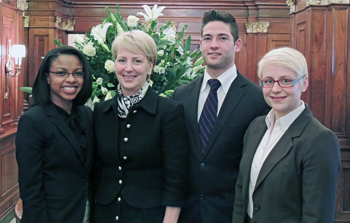 Franziska Boelke had been in the hotel industry for more than 15 years when she decided to give working abroad one last hurrah. She’d worked in hotels in her native Dresden, Germany, and downtown London, and she’d spent five years at Royal Caribbean International cruise line. But she felt something was missing.

She got in touch with HRC International, a hospitality industry placement firm headquartered in the Netherlands, which suggested she apply for the management trainee program at Washington’s historic Hay-Adams Hotel. That was in July 2006. When it ended 18 months later, she’d learned the ins and outs of the front desk, housekeeping and night auditing — and that she didn’t have to job hunt again anytime soon.

From left, Hay-Adams sales manager Chinela Bertrand; hotel manager Colette Marquez; Philip Theodosiadis, a food and beverage management trainee from Greece; and concierge Franziska Boelke, who previously worked in hotels in Dresden, Germany, and London, stand in the lobby of the Hay-Adams in D.C.

“Before concluding my traineeship, I was offered the position of assistant front desk manager. I gladly accepted,” Boelke said.

In January 2013, she joined the concierge team. “It’s one of those kind of positions that once you’re in it, you don’t ever leave because it really is sort of a calling being in concierge,” she said.

Most of the 65 trainees from 31 countries that the Hay-Adams program has brought in since it started in 2002 return to their home countries or go on to others to put their new skills to practice.

Trainees come to the program through the Leading Hotels of the World website, of which Hay-Adams is a part; word-of-mouth recommendations; hotel schools such as Les Roches International School of Hotel Management in Switzerland; and via two placement firms: HRC and Wise, headquartered in Chicago. Participants have come from Australia, China, Finland, India, Jamaica, Spain, Togo and Zimbabwe, among other places.

The program accepts six to eight people each year. The first month is dedicated to orienting the trainees and giving an overview of the hotel. Then they spend four months working in the front office area, four months in housekeeping, two months in reservations and two in night auditing.

“I think it’s great to have a group of trainees from all over the world to bring languages, which is so important in this city because a lot of our guests are international,” said Colette Marquez, manager of the Hay-Adams who is from the Netherlands and went through a manager training program in Miami years ago. “When we deal with delegations, there’s nothing greater than being able to say, ‘Well, so-and-so is here and speaks your language and can really help you with anything you need.’”

For the trainees, Hay-Adams opens doors. Philip Theodosiadis of Athens is coming to the end of his time in the food and beverage management program. He’s been in the hotel business for a decade and came here through HRC.

“I traveled around the world, learned a lot of cultures and worked at a lot of hotels, resorts [and a ship], so the last option to get more experience was to come to the States,” he said. “I’ve learned a lot and had opportunities to move around.”

The program also creates a network, Marquez said. Graduates stay in touch personally and via a Facebook page dedicated to them. They share experiences, tips and job openings.

Although the J-1 visa requires trainees to leave the United States at the end of the program, Hay-Adams has brought quite a few — such as Boelke — back by hiring them to work full time.

Training for the Industry, not the Hotel

It might seem strange to invest so much energy in training people to be a manager only to have them leave, but it’s common throughout the industry.

“It’s not just because it’s the right thing to do, but from a business perspective, it’s only intelligent to have integrated cultures — nationalities and cultures, not corporate cultures,” said Owen Earle Dorsey, executive vice president and chief administrative officer at Capella Hotel Group, which opened the Capella Washington, D.C., a year ago this month.

For global hotel brands like Capella, training managers means training them to work at any of the brand’s properties, not just the one where the training takes place.

“We don’t manufacture mattresses and we don’t make china and silver and linen. What we manufacture every day is service,” Dorsey said. “In order to create that, you have to have the right input.”

“We invest a lot of time and effort in training them and getting them ready and having them understand our philosophy, so then it would be a big waste if they were to leave and go to work for another hotel company,” he said.

Like the Hay-Adams and other area hotels, Capella brings trainees to U.S. locations on J-1 visas, which enable holders to study here for up to one year before they must return to their homelands or go work in another country. The hotel brand has used a third-party vendor partner since 1991 that vets candidates through a process that domestic and international employees alike must go through. The selection ratio averages between 12 and 14 candidates interviewed for every individual selected, which is consistent with operating Capella hotels worldwide, Dorsey noted.

The Capella in D.C. has one trainee on the food and beverage track and one in the rooms division at a time. The process starts with immersion into the work as a line employee before they assume supervisory roles, Obertop said. After that, the options are in the workers’ hands.

“It all depends on the individual how successful they are,” Obertop said. “The person who takes more responsibility and shows more initiative most likely will get an assistant manager position after the year or year and a half, either at our hotel or at some of our other hotels.”

Graduates can later apply to return to the Washington hotel and work here on an L visa. The local location has about 85 employees, hailing from 13 countries.

Acceptance to a training program can come in two ways. One, the IHG personal development program, asks employees during their reviews to describe their goals. When workers express interest in working as a manager in the United States, their managers send the plans to the corporate office. The company also has an online recruiting website for employees.

The other entry point is through IHG Future Leaders Graduate Program, which accepts trainees from universities that focus on hospitality training. The latter has been in practice for years in Europe but only came to the Americas recently. The Willard currently has one trainee on staff and two others are working and learning at other hotels in North America.

The Willard had its own manager training program that saw six graduates in six years, but the hotel stopped that to adopt Future Leaders.

“That program is really to help somebody coming out of a hospitality program to have a really unique chance to work in every single area of a hotel to get a chance to see a 360 [degree] overview of what it takes to run a hotel and to be able to then focus on at the end of that manager-in-training whichever area they have found is their area of passion,” Allen-Mills said.

Applicants should have characteristics such as a positive attitude and a willingness to learn about everyone’s job, from dishwashers to senior managers.

The Willard has about 350 employees with 87 countries represented.

A GM’s Path from Paris to D.C. 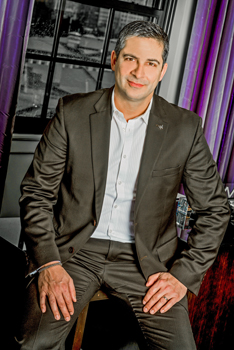 Olivier Servat took another route to his job as general manager of the W Washington, D.C., where he started in September 2013. He’d been part of Starwood Hotels and Resorts since 2005, when it bought the Le Méridien brand while he was at one of its Paris locations. During his career, he’d worked abroad and after seven years in Paris leading the rebranding of the 1,125-room Méridien Etoile and opening the W Opéra, he wanted a change. He’d never worked at a U.S. property, so he told his superiors that he would work for two years at the W Opéra and then he wanted to be transferred.

Servat was offered three general manager options: two at New York City W hotels and one here. He decided to come to Washington, which he felt was more family-friendly.

After an extensive interview process with Starwood vice presidents and owner representatives of the W (Starwood manages the hotels rather than owns them outright), Servat knew by the end of June 2013 that he and his family were D.C.-bound. His experience didn’t necessitate further training when he got here.

Starwood likes to recruit from properties around the world at the general manager level, Servat said. “In our role we do deal with people and guests and customers coming from around the world, and it’s very important to have as much experience as you can in terms of how you cope with different cultural requests,” he said. “The way the service is organized in Asia, the way the service is organized in Europe and the way we organize the service here in the U.S. is somehow different…. The definition of luxury might be different for everybody.”

He added: “The more you’ve been traveling, the more you have the experience of what the international profile is willing to experience, the better it is.”