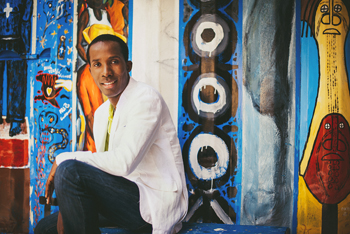 Among the April musical performances in the Francophonie Cultural Festival are Haitian singer-songwriter Bélo (April 11).

Francophiles of all breeds, do not fret — now is your time to shine. Once again, just as spring is slowly starting to grace D.C. with its presence, the annual Francophonie Cultural Festival will be held across the city. The event, now in its 14th year, is the largest Francophone festival in the world and includes more than six weeks’ worth of concerts, theater, film, literary salons, children’s activities and of course cuisine from the world’s French-speaking countries.

And it’s a big world, encompassing dozens of nations throughout Europe, Africa, Asia, the Middle East and the Americas. The International Organization of La Francophonie, which represents one of the largest linguistic zones on the planet, has 75 member states and governments that together represent a population of more than 890 million people, including 220 million French speakers. In fact, since 2001, more than 40 countries have collaborated each year to showcase their Francophone culture and language in the nation’s capital.

“The Francophonie is a certain vision of the world, one that brings together a universe that embodies the dialogue between cultures, the marriage between unity, and diversity in the context of respect for universal values and for linguistic and cultural pluralism,” said Catherine Albertini, cultural attaché at the French Embassy. “In this sense, the French language becomes the channel that enables different cultures to pass through. The Francophonie is, at the same time, respectful of all identities and seeks to creates a transnational space for cultural exchange.” 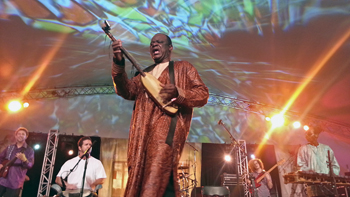 An annual highlight of the festival is La Grande Fête de la Francophonie, a big bash that was held March 21 at the French Embassy and featured more than 35 embassies and organizations sharing the cuisine and cultural traditions of their respective Francophone homelands. Among the evening’s performers were La Femme, an eight-member hypnotic psyche-punk rock collective, and the band Jomion and the Uklos, whose music fuses the rhythms of Benin with an engaging bossa nova sound — two ensembles that reflect the diversity of performers on tap during the six-week festival.

The festival officially kicked off March 1, but there are still plenty of events lined up for April. Film lovers will get their fill with a variety of screenings, many from African nations such as Gabon and Côte d’Ivoire, whose embassy hosted this year’s formal launch reception. For those who remember the 1959 film “Hiroshima Mon Amour,” it is worth mentioning that the star of the film, legendary French actress Emmanuelle Riva, will be celebrated with a retrospective of her work. Screenings include “Liberté, la nuit,” “Léon Morin, Priest” and the Oscar-winning “Amour,” in which Riva portrays a wife who suffers a stroke that tests the strong bond between her and her husband.

Francophone music is another key component of the festival, with a concert by the French saxophone group Ellipsos Quartet to celebrate the bicentennial of the birth of Adolphe Sax, the Belgian man who invented the saxophone.

The French saxophone group Ellipsos Quartet are among the various bands showcased by the Francophonie Cultural Festival.

An eclectic roster of musical genres from Francophone countries will also feature the sounds of Mali with Grammy-nominated musician Cheick Hamala Diabate; as well as Haitian singer-songwriter Bélo; Swiss jazz pianist Claude Diallo; and a special DJ series featuring Mettabbana, a Kosovo native, and Alex, a Paris native who was raised in Tokyo.

The literature series highlights a colorful array of writers and books, including Iranian author Nahal Tajadod, Luxembourg poet Jean Portante and Aimé Césaire, a founder of the négritude movement, which seeks unity in a common black identity in Francophone literature.

Little ones are not forgotten in the festival. Children’s activities include a “Francophone Culture Day” in D.C. Public Schools on March 18 and a family concert with Belgian singer and guitarist André Borbé, who has performed in more than 2,000 concerts across the globe. For the future film buff, Swiss director Samuel Guillaume will host an afternoon where children can explore how animated movies are made.

Of course, no festival is complete without food, and taste buds will not be disappointed at the Francophonie Festival. Notably, renowned French pastry chef Jacquy Pfeiffer will tickle palates with his presentation on “The Art of French Pastry,” featuring a documentary screening of “Kings of Pastry” followed by a book signing and, of course, a tasting.