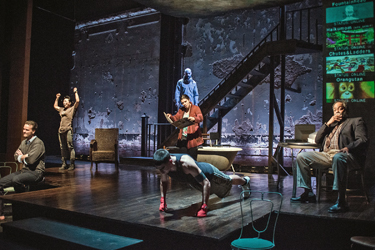 The story of an Iraq war veteran trying to readjust to life in Philadelphia intersects with a web chat room for recovering cocaine addicts in Quiara Alegría Hudes’s Pulitzer-winning play “Water by the Spoonful.”

The Pulitzer Prize-winning drama “Water by the Spoonful” is a puzzling blend of narratives and digressions that ultimately doesn’t gel into a satisfying whole.

Granted, a play need not make perfect sense. There are scripts that brilliantly end with searing questions for the audience. But theater should be cohesive enough to steer the audience in the direction of one theme, or overriding message, without confusing it to distraction. “Spoonful” tap dances around a thesis but lacks a unifying thread, leaving any intended larger message unraveled.

Studio Artistic Director David Muse wrote that Hudes “was inspired by the large-canvas plays of writers like Tony Kushner [“Angels in America”] and Tracy Letts [“August: Osage County”], and set out to write something with a grander scope and scale than her previous work.” Kushner and Letts — who superbly merge simultaneous plots about dysfunctional families and societal woes into their works — are fine role models for Hudes, who in all fairness wrote “Spoonful” as part of a trilogy. As the middle play, it might make more sense if it had been performed in between its bookmarked scripts.

The trilogy focuses on the character of Elliot, a second-generation Puerto Rican and a Marine discharged from Iraq who is trying to assimilate back into life in north Philadelphia. The first play, “Elliot: A Soldier’s Fugue,” is set just after he returns from combat and traces the legacy of war through three familial generations. “Spoonful” follows Elliot’s life six years after Iraq and explores his relationship with his cousin, Yaz, a music professor. The last installment, “The Happiest Song Plays Last,” takes up the lives of Elliot and Yaz a few years after “Spoonful” ends.

The trilogy is somewhat autobiographical in that Hudes, half Puerto Rican and half Jewish, grew up in west Philadelphia and studied music composition (like Yaz) at Yale before she decided to seriously pursue writing as a career. Most of her characters struggle with identity, as did Hudes, who admits that “being half Jewish and half Puerto Rican, and also being much lighter than the rest of my family, I was always shuffling between communities.”

For all of the play’s faults, the second act is decidedly stronger than the first and attempts to pull the rambling pieces together, but clarity doesn’t come fast enough, and it is never absolute.

The audience’s first clue of confusion is Dan Conway’s cluttered backdrop for the action: an old bathtub, stacked metal chairs, glass-top table and dilapidated ceiling. The scenery stays constant, no matter the plotline that is being acted out, which is distracting and frenzied to say the least. (Why is that bathtub in the middle of the floor? This doesn’t get answered until the play’s end.) 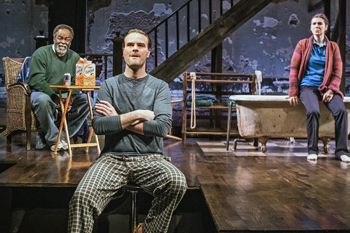 From left, Vincent J. Brown, Tim Getman and Gabriela Fernandez-Coffey are part of an eclectic online chat group for recovering cocaine addicts in “Water by the Spoonful,” now at Studio Theatre.

Next up come the multiple storylines. Elliot, played by Arturo Soria, appears to suffer from war flashbacks while he struggles to make ends meet as a Subway employee. He leans heavily on Yaz, played by Gisela Chípe, whose mother (the aunt who raised him) is dying. Yaz is a music professor who profusely defends John Coltrane’s dissonant jazz (to an imaginary classroom) over more easily digestible compositions. (This last bit has nothing to do with the rest of the play other than to serve as a hint to the audience: Enjoy the improvisational feel and discord in this script).

Plot switch: Hudes introduces four new characters who have signed onto an online chat group for recovering cocaine addicts. Here, lighting designer Michael Giannitti cleverly creates an onscreen experience with projections of screen names and icons on the wall as members sign on and off.

The chat room moderator, user name “Haikumom” (Odessa) is overly zealous in her attempts to reform new members (foreshadowing her eventual fall from self-righteous grace), especially newcomer “Fountainhead,” a rich, pretty white boy who spurns the wrath of other members for denying he’s an addict. Member “Chutes&Ladders,” a cynical, apathetic middle-age African American man bonds with “Orangutan,” an adopted, lonely, hyperactive 20-something who’s taken a job teaching English in her native Japan. Most of this dialogue is heavy-handed, too loud and delivered from superficial characters (maybe how they appear in a chat room?).

Not until the last moment of Act I is the audience informed how Elliot and Yaz’s world collides with those of the chat room, which results in a painfully long and confusing hour, but promises a more gratifying second act.

Although much of this production doesn’t flow, “Haikumom” is, in the end, the most captivating piece of the puzzle, because her character experiences the biggest transformation. The vulnerability that actress Gabriela Fernandez-Coffey brings to Haikumom’s conversion captures a subtle, quiet intensity her fellow actors aren’t able to achieve.

It is this type of sensitivity that the rest of the script needs in order to actualize Hudes’s apparent intention: to lend the full effect of how those afflicted with real-life struggles find answers through bonds — both familial and those self-selected families found in as transient a place as an Internet chat room.

Water by the Spoonful