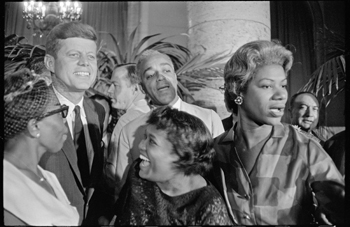 They finally got him. Time, tastes and perhaps the aching need of his photographs just to be out there, on a wall and not inside a fusty vault, finally caught up with Garry Winogrand. The restless, somewhat secretive yet highly prolific photographer died suddenly in 1984 at the age of 56, leaving behind some 250,000 frames of undeveloped film, exposures and contact sheets.

The National Gallery of Art, in a dizzying retrospective of Winogrand’s photographs — the first of its kind in 25 years — has brought Winogrand’s eye for postwar American life into the present-day light of the 21st century. The 190 images span the 1950s to the time of his death, capturing the spirit of a country in the midst of both promise and tumult.

Many of the photographs have never before been exhibited or reproduced, offering a more complete look at an iconic artist who photographed everything from zoo animals to antiwar protesters to everyday street scenes.

Winogrand, in fact, was dubbed a New York City street photographer because he worked at street level, or eye level, wandering, moving around all of the time in a frenetic pace that seems contagious as you roam the halls of this exhibit.

But he was also an avid traveler who ventured across the United States, from San Francisco to Chicago to the open country of the Southwest. The visual results of these travels are reminiscent of fellow American photographers such as William Eggleston, who injected color, literally, into artistic photography, or Walker Evans, the master of what he termed the roving, “hungry” eye. 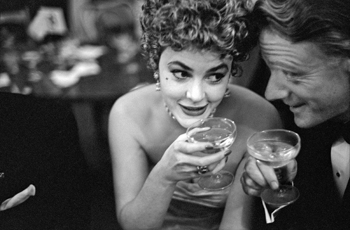 Winogrand, who grew up in a Jewish working-class area of the Bronx, started photographing for magazines in the 1950s like the defunct Collier’s, Life, Look and even Sports Illustrated (there is a startling shot here of welter-weight champ Carmen Basilio taking a shot in the face).

All of Winogrand’s photographs seem to be on move, regardless of whom they portray. He liked to shoot women (lots of them), posers and even storefront mannequins. He liked to shoot at airports, train stations and bus stations, where people mill around anxiously, getting lost in the crowd. No iPads, phones or plugged-up ears here — just people roving, searching and being in the moment. He liked to shoot animals at the zoo, parades, circus clowns, the murkier corners of show business, high- and low-brow society, and countless politicians and political events.

For instance, we see Winogrand on assignment in the 1960s at the Democratic National Convention, where there’s a glimpse, just barely, of Robert Kennedy in a sea of tacticians and workers, as John F. Kennedy works the crowd. 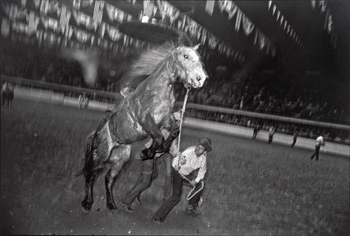 At one point Winogrand shot rolls of film at Dealey Plaza the year after JFK’s assassination, but his work wasn’t necessarily about historic moments or history makers. He was able to frame both the heady postwar optimism of the time along with the pessimism of the post-Vietnam era by focusing more on the peripherals — everyday people on the move, lolling about on park benches, living it up at a party, participating in a campaign rally, or just maneuvering down a crowded sidewalk.

Winogrand snapped it all up. Restless is a good way to describe the thrice-married photographer who could be a playful joker and a disquieting observer of details and human nature, spotting, for example, a well-turned-out man stuck in a shirt that’s just a shade too small for him.

You can almost hear the soundtrack behind his images: the blustering wind on a desolate beach, the car horns punctuating the Manhattan air, the challenging chattering of a monkey, murmured voices on a park bench, the swish of a woman’s fur coat, the gaggle of young kids playing. Whether it’s a sleekly dressed couple among Central Park’s pillar of trees or a girl tying her shoes in front of an adult movie shop in Texas, the exhibit makes you feel as if you’ve been on a bus ride and time machine all at once.

It also makes you wonder about what’s still out there — the reams of undeveloped film and exposures that number in the thousands. Winogrand published five books, but they contain only a fraction of his oeuvre, and he largely postponed printing and editing his work, especially at the end of his life, which was cut short by gall bladder cancer. Fortunately, the National Gallery has stepped in to fill in some of the blanks and offer a more complete, nuanced picture of a man who captured the pulse of a nation.

through June 8
National Gallery of Art
on the National Mall between 3rd and 9th Streets at Constitution Avenue, NW
For more information, please call (202) 737-4215 or visit www.nga.gov.