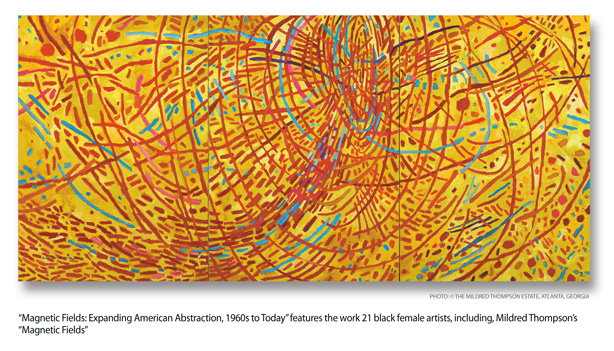 Within the artificially constructed confines of the art world, black female artists often are expected to create work that comments on race or gender, but that’s just one more stereotype atop a pile of stereotypes that these women face.

“Magnetic Fields: Expanding American Abstraction, 1960s to Today,” an enlightening exhibition of abstract art by 21 black female artists at the National Museum of Women in the Arts, displays a range of talent and a neglected history of their contributions in a practice dominated by white men. While some pieces challenge racial perceptions, most of the work is more abstract, defying narrow categorization or definitive interpretations. 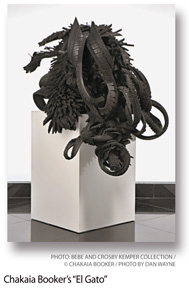 The Kemper Museum of Contemporary Art in Kansas City organized the exhibition, which features artwork created by artists born between 1891 to 1981. Including sculpture, paintings and mixed media, the exhibition reveals how contemporary artists have learned from their forebears while making their own contributions.

The exhibition takes its title from Mildred Thompson’s oil painting triptych that is on display. Thompson, who died in 2003 in Atlanta, used bright, swirling, dotted lines of red and turquoise on a sunny yellow background that conveys happiness and unbridled abandon, or a scientific exploration of how invisible magnetic fields surround us with their undetectable pull.

In another gallery, Maren Hassinger’s sculpture titled “Wrenching News” rises from the floor like a coral reef or tangled nest of cobras. It is constructed from shredded and twisted pages of The New York Times with articles about Hurricane Katrina and its devastation of New Orleans in 2005, in particular many black neighborhoods where residents are still struggling to rebuild their lives. The work indirectly tackles issues of race and class in America and how we don’t learn from our past or take steps to avoid the next round of tragedy. 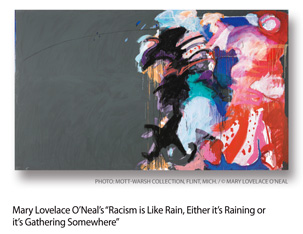 Mary Lovelace O’Neal also addresses racial inequality in her large-scale painting titled “Racism is Like Rain, Either it’s Raining or it’s Gathering Somewhere.” A smooth black ground on one half of the painting is contrasted with a swirling mass of colors and loosely defined figures that appear to be struggling while marching toward — or over — the black ground. The title provides a more pointed context to an abstract work whose meaning isn’t readily apparent.

In “Autobiography: Japan (Shisen’do, Kyoto),” Howardena Pindell skirts across a former trip to Japan that also represents an ongoing struggle to maintain her own memories after suffering a brain injury in a 1979 car crash. An amorphous form of accumulated paper-hole punches is interspersed with torn fragments of postcards and exhibition invitations that can’t be read. 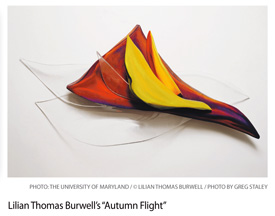 Born in 1943, Pindell grew up in the segregated South when racism was rampant. She filmed “Free, White and 21” in 1980, a 12-minute video in which she describes the racism she has endured since childhood. The video is intercut with images of Pindell disguised as a white woman who makes snide remarks about these racist encounters, including a biting critique that Pindell’s artwork isn’t political enough and doesn’t adequately reflect her own experiences, a tragic refrain still heard by many black female artists today. “If your symbols aren’t used the way we use them, then we won’t acknowledge them,” the “white” Pindell says. “In fact, you won’t exist until we validate you. If you don’t want to do what we tell you to do, then we’ll find other tokens.”

Abigail DeVille’s “Harlem Flag” owes a debt to painter Robert Rauschenberg’s pop art in her use of discarded materials that she scavenged from the streets of Harlem, including sheetrock, a door and a burnt American flag that hangs in tatters. A stretched wallpaper scrap and window shade create a sense of tension, perhaps between the triumphs and travails in the history of Harlem.

A menacing mass of twisted and shredded black tires sits on a pedestal in Chakaia Booker’s “El Gato,” which is in the Kemper Museum’s permanent collection. Booker began experimenting with rubber tires in the 1990s in a new visual language, with many possible associations to race, industrialization, scarification or our throwaway consumer culture that fills landfills and rivers with old tires that will take decades to decompose. This heavy tangle of rubber spikes and tentacles is open to many different interpretations, like much of the work in “Magnetic Fields.”