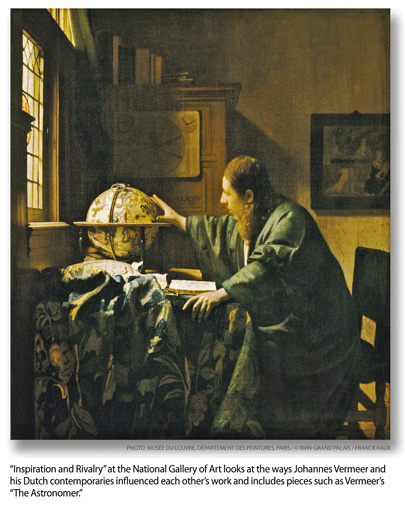 An expansive show on the art of Johannes Vermeer and his contemporaries lingers in private spaces and moments, reveling in the common themes and motifs that emerge in this landmark showcase of Dutch high-life paintings.

“Vermeer and the Masters of Genre Painting: Inspiration and Rivalry” is a stunning exhibition at the National Gallery of Art (NGA), certainly deserving of the velvet rope that visitors must walk through to enter. The show explores the work of Vermeer and fellow Dutch Golden Age painters such as Gerard ter Borch, Gabriel Metsu, Pieter de Hooch and Jan Steen from 1650 to around 1675, delving into how the painters influenced and borrowed from each other as they experimented with new ways to depict domestic interior scenes.

The show features a remarkable 10 paintings by Vermeer — scholars currently agree that there are only 34 paintings definitely attributable to him — and that alone demands a visit. The gallery, after all, notes that many of the works on display have not been seen in the United States since its 1995-1996 blockbuster show “Johannes Vermeer.”

This exhibition builds off of Vermeer, but his contemporaries are absolutely given their proper time in the spotlight as the show unveils the prominent motifs and artistic devices they spearheaded and that the Delft painter often emulated.

The themes developed in the show build on the collections of the three organizing institutions of the NGA, the National Gallery of Ireland and the Louvre in Paris, said Arthur Wheelock, the gallery’s curator of northern baroque paintings and one of the curators of “Vermeer and the Masters of Genre Painting.” 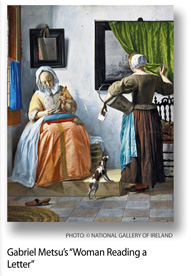 “This was really a collaborative show, and that is always fascinating in terms of organization and challenges,” he said, noting that each version of the show at the three museums slightly varied the groupings on display as some paintings could not make it for the entire tour.

The exhibition came together over the course of six years, stemming from conversations with Adriaan Waiboer, head of collections and research at the National Gallery of Ireland and a former NGA intern.

“We came up with this schema that you would have these groups of paintings, of comparable themes, and then be able to ask the questions: To what extent did these artists look at each other’s works? How did they know each other’s work? And when they did respond, how carefully did they respond? And how much of their most inherent style did they retain?” Wheelock told The Washington Diplomat. 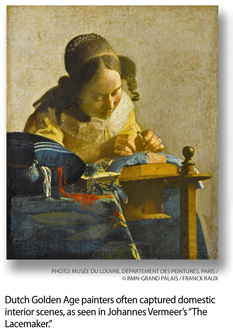 For viewers, it is clear that “seeing the paintings side by side makes you see them differently and respond in different ways,” he noted.

Quiet spaces and solitary figures in private households are a key innovation of Dutch art, and the gallery showcases paintings on a variety of topics from lacemaking to letter writing. The show also delves into the fascinating world of signs and symbols in 17th-century Dutch painting. The ace of hearts card on the floor suggests the romantic nature of Gerard ter Borch’s “Officer Writing a Letter,” adding a layer of surprise and mystery to those looking to decipher the backstories behind these otherwise-benign domestic scenes. These artists used symbols as varied as dogs, petals and broken eggs to entice and suggest specific emotions or ideas to their viewers. Museumgoers can also bask in the paintings’ shimmering fabrics, secretive glances, half-hidden meanings and the effects of light and shadow as they explore 17th-century Dutch interior life at a time when Golden Age artists were at their prime.

“These are incredibly high-quality paintings,” Wheelock said. “The installation flows nicely and there’s variety in the ways the rooms look and how the story evolves in different ways.” 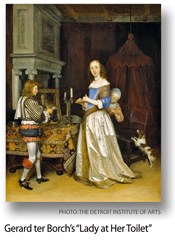 The show is packed with surprises, even for those well-versed in Dutch art. The impact of ter Borch’s innovative portrayal of a woman standing with her back to the viewer on his fellow artists is particularly noteworthy, as the motif is emulated more than any other in Dutch art. This artistic device offered a revelatory moment for Wheelock, who noted that he had never thought of Jan Steen’s “Itinerant Musicians,” the one exterior painting on display, in connection with ter Borch before this show.

“It’s interesting to see other artists of the time adapting that figure for their own purposes in very different ways,” he told The Diplomat.

The exhibition, notable for its 10 Vermeers, is also filled with loans from across public and private collections alike. “It’s quite an array of generosity of lenders,” Wheelock said, adding that there was “great enthusiasm for the concept.”

“It really has stuck a chord.”

Vermeer and the Masters of Genre Painting: Inspiration and Rivalry