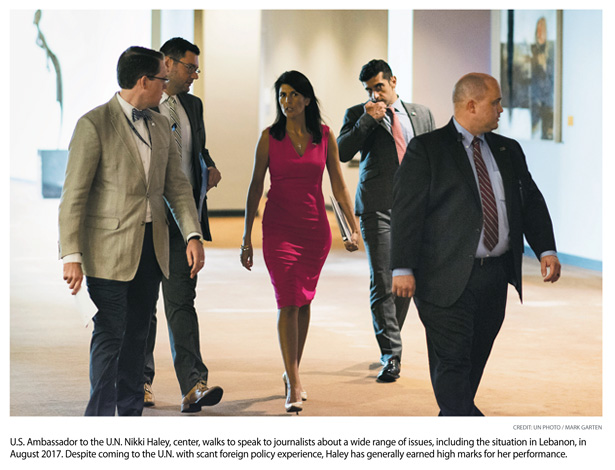 In an administration characterized by a tumultuous, chaotic foreign policy, one figure has received reasonably favorable reviews from experts: Nikki Haley, the U.S. ambassador to the United Nations.

Haley has at times seemed an outlier in President Donald Trump’s Cabinet. Although the former South Carolina governor entered the post with no substantive foreign policy or diplomatic experience, Haley has shown an aptitude for the job and proven to be quite a shrewd political operator on the world stage.

“Haley has had a pretty remarkable first year at the U.N.,” Richard Gowan, a U.N. expert who teaches at Columbia University, told The Washington Diplomat. “She has gone from foreign policy novice to a central player in the administration.”

Thomas Weiss, the presidential professor of political science at the Graduate Center of the City University of New York and director emeritus of the Ralph Bunche Institute for International Studies, said he would give Haley a “passing grade” for her first year.

“It’s a decent report card on somebody you thought was going to be a D minus,” he said. “She’s performed well with a very bad dossier.”

Haley, the American-born daughter of Sikh Indian immigrants, previously served as the governor of South Carolina from 2011 to 2017 before stepping into her current position at the U.N. Prior to that, she was a member of the South Carolina House of Representatives. Political watchers in the United States were familiar with Haley thanks to her high national profile within the Republican Party. Mitt Romney considered her in 2012 as a possible vice presidential running mate and she gained further prominence after delivering the Republican Party’s response to the 2016 State of the Union address delivered by then-President Barack Obama.

Soon after President Trump’s election, he nominated Haley to be the U.S. ambassador to the U.N. and she was confirmed by a Senate vote of 96-4. She was sworn in on Jan. 25, 2017 — one of the fastest moves in an administration that continues to seriously lag behind in key appointments in the diplomatic sphere.

Originally, Haley was under consideration to become Trump’s secretary of state, a position she reportedly turned down due to her lack of foreign policy experience. Trump came back to her with the U.N. position. Haley responded that she wanted to have a voice on the president’s Cabinet and National Security Council, as well as the freedom to speak candidly. 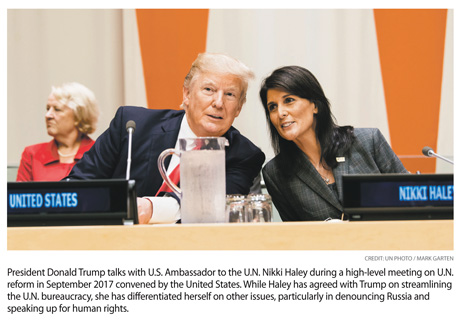 “I said ‘I am a policy girl, I want to be part of the decision-making process,’” she told CNN’s Elise Labott for a September 2017 profile. “He said, ‘done.’ And I said, ‘I don’t want to be a wallflower or a talking head. I want to be able to speak my mind.’ He said, ‘That is why I asked you to do this.’ In all honesty, I didn’t think they were going to take me up on everything I asked for. And they gave me all that. So how do you turn that down?”

She didn’t, and since then, Haley has used that voice to forcefully denounce human rights abuses abroad and racism at home — louder than the president himself — while vociferously condemning Russia, North Korea, Iran and Syria. More recently, she said that the women accusing Trump of sexual misconduct “should be heard,” a break from the administration’s denials on the matter.

At the same time, she has toed the Trump line on downsizing America’s financial support for the United Nations and criticized the world body’s alleged anti-Israel bias, even as she’s deftly maneuvered diplomacy at Turtle Bay and earned the respect of her colleagues.

Given her relatively impressive track record, many have speculated that Haley would take over for embattled Secretary of State Rex Tillerson, although The New York Times reported last month that CIA Director Mike Pompeo is rumored to be Tillerson’s replacement if Trump decides to dump Tillerson. So for now, Haley — who has straddled a fine line of elevating her profile without eclipsing the president — looks set to remain in New York, although with her star on the rise, she may harbor grander political ambitions in the future.

Weiss described himself as “pleasantly surprised” by Haley on the U.N. stage.

“Nobody had ever heard of her. She has not, I think, made a fool of herself. And on a couple of occasions — setting up the conversation on U.N. reform, in trying to discuss the North Korean issue — she has been much more straightforward and closer to a modest, sensible Republican foreign policy stance than I expected and anybody else did as well,” Weiss said.

As far as the post of U.S. ambassador to the U.N. goes, “she’s about the best you can hope for from this administration,” according to Weiss.

“She actually seems to have been a somewhat stabilizing, calming influence on the dear president,” he added.

Some of the only notable foreign policy stands by the Trump administration have been a result of Haley’s tenure, experts noted.

“Haley’s biggest achievement has been to find common ground with China over sanctions on North Korea,” Gowan said. “The fact that she got two serious sanctions resolutions through the Security Council was a real diplomatic coup. If she had failed to do that, the Korean crisis could have escalated even more dangerously than it has done so far.”

But it has not been an entirely successful year at the U.N. The devastating Syrian conflict has forced more than half of all Syrians to flee their homes, according to the U.N., and likely more than 470,000 people have died from the conflict as of February 2016, the independent Syrian Center for Policy Research estimates.

Russia entered the conflict in September 2015 and since then has established itself as a military power in the region, with President Vladimir Putin propping up the regime of Syrian President Bashar al-Assad. 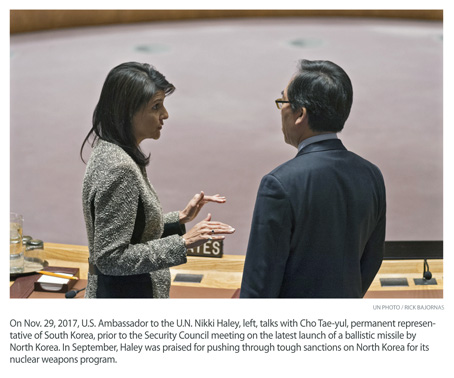 “Haley has not been able to make any real impact on Russia over Syria in the Security Council,” Gowan said. “She has made some strong moral statements over the war, but the Russians have simply shrugged them off. This is not really Haley’s fault though. Moscow had already achieved a dominant diplomatic position over Syria before the Trump administration took office.”

Broadly, Weiss said that with Haley, “no red flags have gone up because of her,” unlike with the Trump administration at large. He also pointed out that Haley seems to have a “decent relationship” with U.N. Secretary-General António Guterres, which is important in that bureaucracy.

“There are lots of red flags that have gone up over the administration’s politics and policies. But she has been a more measured voice for even the policies most people find questionable — pulling out of Paris [climate accord], UNESCO. She will defend those as in the U.S. interests, but at least she doesn’t tweet invectives,” Weiss said.

Trump delivered his debut address at the U.N. General Assembly in September, largely sticking to the expected script — until he didn’t. He called North Korean leader Kim Jong-un a “rocket man” on a “suicide mission for himself and his regime.” He threatened that the U.S. would have “no choice but to totally destroy North Korea” if forced to defend itself or its allies.

According to Weiss, that speech showed that Haley “didn’t keep him totally under control.”

At the same time, Haley too has occasionally gone off the rhetorical rails, declaring for instance that North Korea is “begging for war.” But she has balanced her bellicose statements with a politician’s touch for wooing over her fellow diplomats.

“She is tough on Russia and a fierce defender of Israel. She is more of an internationalist than the president, and more willing to talk about the value of human rights and foreign aid than either Trump or Tillerson,” he said.

Early on, he added, it appeared as though Haley’s instincts “would set her apart from the White House.”

“But she has delivered on North Korea for Trump and also been a strong defender of his tough line on Iran. So despite some fairly big differences about foreign policy, she has actually ended up very close to the president on the big issues of 2017,” Gowan pointed out.

For instance, Haley has consistently pushed for stepped-up sanctions on North Korea. In September, the U.N. Security Council agreed on its toughest-ever sanctions against the regime, a key success for Haley, according to experts. The measures included restricting North Korea’s imports of crude oil and banning textile exports — a critical source of hard currency.

One noteworthy point of departure from Trump has been Haley’s tough stance on Russia, a typical establishment Republican foreign policy view that does not line up with what the president has said. Trump has consistently spoken highly of Russia and Putin, called for warmer relations with the country and has repeatedly cast doubt on the U.S. intelligence community’s assessment that the Kremlin directed a cyber and information campaign aimed at interfering in the 2016 election and promoting Trump.

But in her first speech to the Security Council in February, Haley struck a strong tone on Russia. 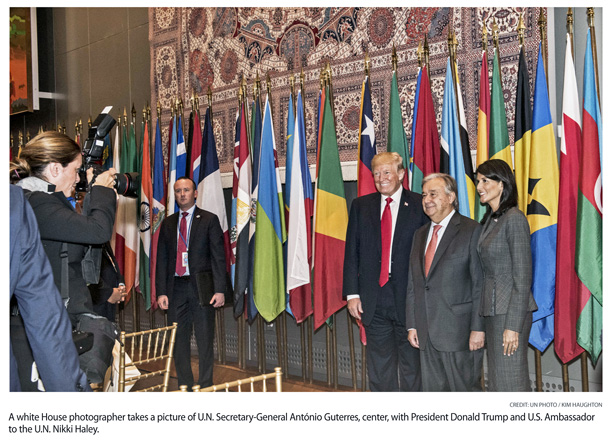 “Eastern Ukraine of course is not the only part of the country suffering because of Russia’s aggressive actions. The United States continues to condemn and call for an immediate end to the Russian occupation of Crimea,” she said. “Crimea is a part of Ukraine. Our Crimea-related sanctions will remain in place until Russia returns control of the peninsula to Ukraine.”

As for Haley’s reception at the U.N. itself, “foreign diplomats at the U.N. really want to see Haley succeed,” Gowan told The Washington Diplomat.

“They see her as a moderating force in the administration and admire her for saving the U.N. from really vicious budget cuts at the hands of Trump,” he said. “Despite frictions over issues like Iran, Haley has solid working relations with diplomats from major U.S. allies in New York. She is reportedly less interested in cultivating ties with ambassadors from smaller countries. Most diplomats think that Haley won’t stick around at the U.N. very long, and that she’ll either replace Tillerson at State or prepare for a presidential run.”

As for Haley’s immediate future, she will face more challenges in the year ahead at the U.N. — from North Korea, Russia, Syria and the Israel-Palestine issue, for instance — if she decides to stick around. But with the possibility of a higher-profile post or even a future run at the presidency, the former South Carolina governor may look beyond New York.

Although, as Gowan pointed out, “right now, she is a safe distance from the constant mess around Trump, but if she returns to Washington, she’ll risk getting mixed up in it.”

“It may be better to stay in the New York bubble and keep building her reputation as a safe pair of hands,” he said.