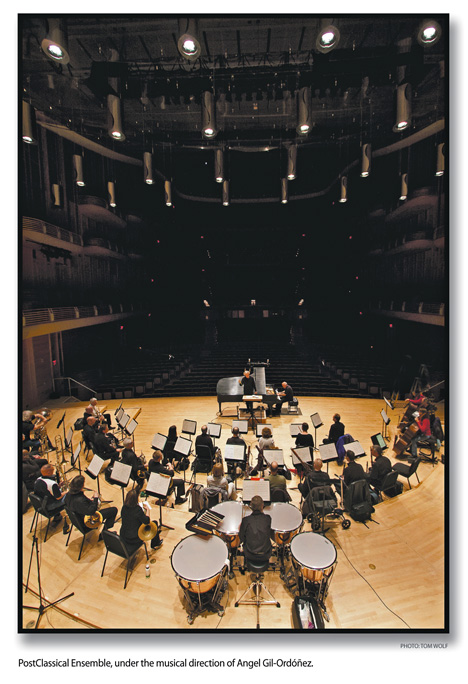 One of D.C.’s most unconventional and adventurous musical ensembles is set to transform the iconic Washington National Cathedral into a cutting-edge venue for the city’s vibrant music scene.

PostClassical Ensemble, named the new ensemble-in-residence at the cathedral, is bringing an exciting, innovative inaugural season of music to Washingtonians. Expect unusual, utterly surprising performances from this self-described “experimental orchestral laboratory” that will shake up your view of both classical music and the cathedral itself.

The group will be focused this season on contextualizing history — re-examining musical responses to World War II in a Pearl Harbor Day Commemoration Concert on Dec. 7, 2017, and exploring the cultural Cold War between the United States and the Soviet Union on May 23, 2018, for instance — as it presents music in an extraordinary space.

As PostClassical Music Director Angel Gil-Ordóñez put it, “We are out of our minds here and doing things that are not the ‘correct’ things to do when you talk about symphony orchestras.”

That often includes integrating theater, dance or film and gravitating toward works that tend to fall below the radar. For example, “Deep River: The Art of the Spiritual,” which will be held Feb. 28, 2018, will showcase Harry Burleigh (1866-1949), a forgotten hero of American music. Burleigh was an assistant in New York City to Czech composer Antonín Dvořák and subsequently the composer/singer who was most responsible for turning spirituals into art songs.

Past PostClassical performances have focused on a diverse range of musical styles, including works by Mexican composer Silvestre Revueltas and American composer Lou Harrison, who often incorporated Javanese-style gamelan instruments into his music.

As the ensemble-in-residence, PostClassical and the Washington National Cathedral’s director of music worked together to craft concerts and themes that will both surprise Washingtonians and still exist within the cathedral’s mission.

“My own view of what the cathedral should be doing is not to try and compete or pretend to be the Kennedy Center or the Strathmore, but to go back to medieval times when cathedrals were the civic centers or the hub of the community,” Michael McCarthy, director of music at the Washington National Cathedral, said. “We wanted to take that idea of a cathedral building being at the center of the community.

“We are at a bit of a threshold here as an institution strategically in wanting to develop this as a venue for the arts, but in a way that we do it uniquely,” McCarthy noted. Part of pushing that goal is working with innovative groups such as PostClassical Ensemble.

According to Gil-Ordóñez, one of the challenges for the ensemble is to find partners that share its mandate of “creating events that have a sense of occasion.” McCarthy “has a vision for the cathedral that actually resonates with our vision,” he noted.

“This is a real partnership,” Gil-Ordóñez said. “To me, as a conductor and the music director, to make music in such an extraordinary space is an incredible experience.”

This marks the first time the group, founded in 2003, will have a dedicated performance space.

With the residence at the cathedral, Horowitz said the ensemble is “more than ever embracing a mission to explore music as an instrument for mutual understanding and human betterment.”

The Washington National Cathedral offers performers a variety of spaces, from the famous nave to smaller, more intimate chapels. “We want to create some magical experiences, and we’re trying to take the big space of the cathedral and make an intimate experience,” McCarthy said.

The group is an excellent fit for the cathedral, he said. PostClassical is “not daunted by the space — they’re intrigued by the space,” McCarthy told us.

“I was really fascinated with the way they approach presenting music, which is not in a two-dimensional way. It’s something that creates a different dynamic in how you experience classical music,” McCarthy said.

Horowitz told The Diplomat the ensemble plans to “use the nave in unusual ways and we want it to be a surprise, but we’re going to use the full space, not just the stage up front. The cathedral is an amazing playground for producing concerts with unusual formats.”

Gil-Ordóñez added, “The infinite possibilities of the sides, the balconies — it’s exciting.” And the acoustics are “phenomenal,” he said. But there’s something else that comes from performing in the Washington National Cathedral.

“It is an incredible musical experience for the musicians and for the audience to be in such a special place, a communal place, that brings out a spiritual component no other auditorium in town would bring to the experience,” Gil-Ordóñez said. 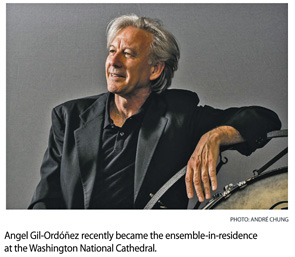 For those looking to plan out their 2018 arts calendar, the May 23 concert will be of particular interest to the international community in D.C., Horowitz suggested. “I cannot imagine an event more pertinent to the diplomatic community than one revisiting the cultural Cold War,” he said.

“Shostakovich was made into a stooge,” Horowitz said. “The Western propaganda that I grew up with and I bought was that he was a great talent and was ruined by the communists. That’s a false story. It turns out he wrote great music during the Stalin period, and some of it is very political, and political in complex ways. It’s a very complicated tale.”

The May performance will look at the cultural Cold War fought by the CIA and the KGB, where each agency sought to promote the notion that the arts only succeeded in their own respective country and political system.

With U.S.-Russia relations so strained and the Kremlin’s interference in the 2016 presidential election under investigation by a special counsel and several congressional committees, this performance will be particularly timely and fascinating.

“We think we’re really hitting the nail on the head with this event,” Horowitz said. “There’s no telling what magnitude of importance it will acquire.”

McCarthy said one of the appealing aspects of PostClassical is the way it uses art as a means of expressing cultures and history beyond the U.S. experience. With the May concert in particular, “the way that music and art has been used as a tool is fascinating and will be of interest to the broader diplomatic community,” he said.

“The ensemble will take an international set of themes and embed them in an edifice that, while gothic, is quintessentially American,” McCarthy pointed out.

When discussions began about the group coming on board as the ensemble-in-residence, PostClassical and McCarthy scoped out three years of programming ideas. Already in the planning stages are possible events connected to the 200th anniversary of poet Walt Whitman’s birth in 2019, for instance.

Whatever the group does at the cathedral, expect the unexpected, Horowitz said.

“We regard ourselves as experimental,” Horowitz said. “We’re complete renegades, we’re like guerrilla warriors, and we’re very focused on the question: Why give a concert at all? What’s the point of it? We think we have a pretty good idea of what the point is.”

“We put ourselves in danger,” he said.

For more information on PostClassical Ensemble, visit http://postclassical.com or call (240) 630-4322.