Palestinian Artists Depict Hope and Joy in ‘The Impossible Dream’ 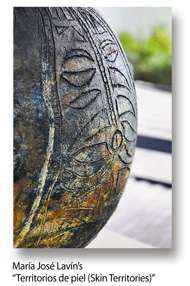 Clay has been used by humans for millennia as a basic building block and a form of expression. In today’s fast-paced world, however, taking the time to mold a lump of clay into an intricate piece of pottery seems almost quaint.

But seven artists at the Mexican Cultural Institute demonstrate how this fundamental yet versatile material can be shaped to build bridges and blend the past with the present in “Tierras Ambulantes,” or “Clay in Transit.”

Produced by the Mexican Ministry of Foreign Affairs and curated by Paloma Torres, the exhibit showcases seven Mexican sculptors (including Torres) who use clay as a vehicle to return to their deep-rooted history while crafting contemporary pieces that embody technique and time.

Torres was originally drawn to the exhibit because communications these days are so immediate. “This is a technique that has to have a lot of patience,” she said. “It belongs to all of humanity, as the first material used is clay.”

Torres said the exhibit represents a “return to the primary [elements] of life” and reflects the world in which we live — a world that she calls a “common planet to all humanity.” Even if people want to “build a wall,” she said, it’s still “all the same planet.”

Torres, who comes from a family of architects, draws inspiration for her own clay sculptures from the beauty of human creation. “Beauty is something we need in this world — hope in life.”

The slow process of sculpting clay is itself an attraction of the show.

“It’s a soothing exhibition that has you walk through very primal things. It soothes your soul,” said Alberto Fierro, executive director of the Mexican Cultural Institute.

Fierro, who knows some of the featured artists, mentioned Gustavo Pérez, the oldest in the exhibit, as a “master of ceramics.” Younger artist Ana Gómez portrays a mixture of states and cultures in the U.S. and Mexico, Torres noted.

“[All of the art] is a reminder of what artisans have done for many centuries,” Fierro said. “Each room has a piece that I love.”

While relying on ancient techniques, the artists also incorporated contemporary touches, including mixed media, conceptual installations and experimentation, to differentiate their work from traditional sculpture. The result is a striking fusion of old and new, from Gómez’s playfully global arrangement of plates, saucers and cups in “Sweet Home,” to Saúl Kaminer’s “Shaman,” a piece that looks both primordial and futuristic at the same time.

The exhibition also uses an age-old material to convey modern-day messages. In light of President Trump’s heated rhetoric on the subject of immigration, the Mexican Cultural Institute has strived to paint a more accurate portrayal of Mexican culture. While subtler than previous shows that directly commented on the immigrant experience, “Tierras Ambulantes” has similar political overtones.

In addition to the sculptures on display, the exhibit invited Mexicans to take photographs with their favorite works of clay. The resulting installation highlights crowd-sourced images and accompanying stories submitted to the curator that convey the importance of ceramics and pottery to Mexicans living in the U.S.

Torres said that when you move to another country, you carry a piece of your country with you. “It’s a literal way to say this with pottery — showing the real worlds of immigrants. All of us that are here are immigrants. Since mankind exists, immigration exists.”