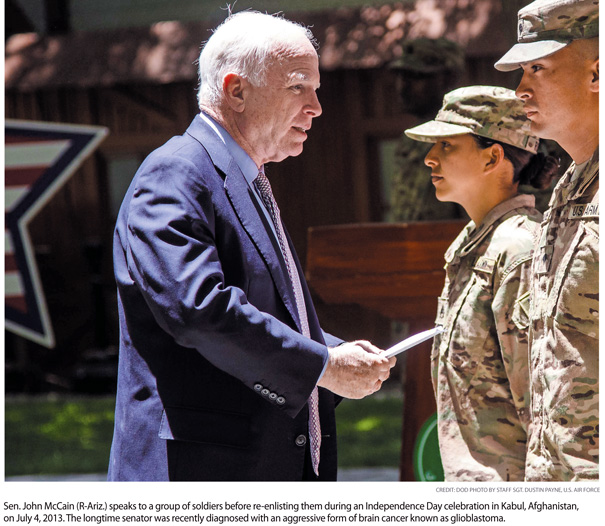 The median survival for glioblastoma patients is about 15 months, oncologists say

The cancer, glioblastoma, is the most common malignant tumor that originates in brain cells, as opposed to cancers that spread to the brain from elsewhere in the body, said Dr. Manmeet Ahluwalia, dean of the Cleveland Clinic’s Rose Ella Burkhardt Brain Tumor and Neuro-Oncology Center.

But it’s a very tough cancer to treat. Glioblastoma is difficult to surgically remove, resists attempts to kill it with radiation and chemotherapy, and nearly always comes back, cancer experts said.

“The tumor many times responds to treatment initially but it tends to grow back,” said Dr. Kurt Jaeckle, a neuro-oncologist and co-director of the Gerald J. Glasser Brain Tumor Center at Overlook Medical Center’s Atlantic Neuroscience Institute in New Jersey. “It’s not unusual to have to treat it again.”

McCain, 80, underwent a procedure on July 14 to remove a blood clot from his brain just above his left eye. The following Wednesday, his office reported that the blood clot was associated with glioblastoma.

Until last year there was no medical evidence that people older than 70 benefited from the standard treatment for glioblastoma, said Dr. J. Leonard Lichtenfeld, deputy chief medical officer for the American Cancer Society.

But a study presented in June 2016 at the American Society for Clinical Oncology’s (ASCO) annual meeting was the first to show that people over 70 in otherwise good health could benefit from aggressive treatment, Lichtenfeld said.

“Sen. McCain is obviously a very active gentleman and has outstanding functional capacity for someone of his age,” Lichtenfeld said. “I suspect his family and care team are going to strongly consider treatment. Other individuals may choose not to do that.”

Glioblastoma arises in the supportive tissue of the brain and typically is highly malignant, with finger-like tentacles that reach deep into the brain, according to the American Brain Tumor Association (ABTA).

Glioblastoma represents about 15 percent of all primary brain tumors, with an estimated 12,390 new U.S. cases predicted for this year, according to the ABTA.

Median survival for glioblastoma patients is about 14.6 months, the association says, and about 30 percent of patients are still alive after two years.

Treatment for glioblastoma tends to be a holding action, rather than something that completely cures the patient, said Dr. Brian Alexander, a leading radiation oncologist at the Dana-Farber Cancer Institute in Boston.

“Generally it’s one of the toughest problems we have in oncology,” said Alexander, who’s also a brain cancer expert for ASCO. “Successful treatment delays a growth coming back rather than curing the tumor, in most cases. We do know of patients who are years out after treatment that haven’t had a recurrence of their tumor, but that’s more of an exception than the rule.”

The first challenge of treating glioblastoma is to surgically remove as much of the cancer as possible from the brain, Ahluwalia said.

Brain surgeons have gotten better at clearing out tumors thanks to real-time MRI scans that they can consult during an operation, he added. 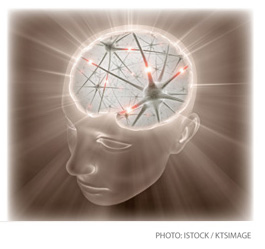 “The surgeon can check with the MRI how much tumor is left behind,” Ahluwalia said. “The hope is to get the greatest amount of tumor out without hurting the patient.”

Unfortunately, glioblastoma tends to aggressively infiltrate the brain, and even successful surgery will likely leave behind some cancerous brain cells, Alexander said.

“Even if you treat everything you can see with surgery, there are still cells that are infiltrating the normal brain, so you can’t just take it all out,” Alexander said.

That means three to six weeks of follow-up treatment with radiation therapy alongside longer-term oral chemotherapy to try and kill off as many loose cancer cells as possible, Alexander said.

In the past, doctors would irradiate the whole brain to try and kill stray tumor cells, but cancers would still recur near the original site, Alexander said. Standard therapy now calls for targeted radiation aimed at the area around tumor location.

Glioblastoma also resists attempts to kill it through chemotherapy, in part because standard chemotherapies generally are designed to not get into the brain, Alexander said.

“Most of the time you don’t want toxic therapies getting into the brain,” he said. “That’s been a challenge over the years, in terms of developing the right kinds of drugs for this tumor.”

Glioblastoma also tends to contain a lot of different kinds of tumor cells within it, which makes finding the right chemotherapy even more difficult, Alexander added.

“If you treat with one specific therapy, it may just evolve a resistance to it over time,” he said.

Several clinical trials currently are under way to test the effectiveness of immunotherapy drugs in treating glioblastoma, Ahluwalia said.

For more on glioblastoma, visit the American Brain Tumor Association at www.abta.org.