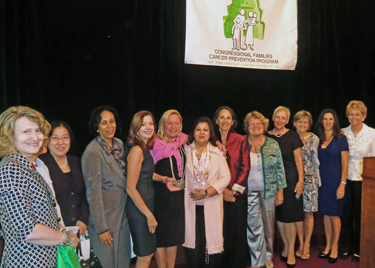 They call cancer “the big C” for a reason. An estimated 1,638,910 people will be diagnosed with some form of cancer this year — 226,870 with breast cancer, according to the National Cancer Institute. The numbers are daunting.

Researchers are at work trying to improve treatment methods and ultimately find cures, while doctors diagnose and treat symptoms of the disease. But cancer isn’t just a scientific riddle or a physical battle — it is an emotional one. That’s where friends, family and support groups come in. For diplomatic spouses in D.C. who’ve survived, been diagnosed with, or are fighting breast cancer, that’s where Ellen Noghès comes in.

Noghès is the American-born wife of Gilles Noghès, Monaco’s ambassador in Washington. As a former public relations and marketing specialist, Noghès is well suited to the task of raising breast cancer awareness. But it was her own experience as a breast cancer survivor — and the diagnosis of two friends, also diplomatic spouses — that propelled her to reach out to women who found themselves in a similar situation.

So she started a support group. Since 2009, a group of women from various countries in various stages of cancer, from diagnosis to remission, have gathered regularly to speak freely about their fears, share stories, offer support, and find reasons to laugh together.

Cancer isn’t an experience everyone wants to revisit. Some survivors, anxious to put the disease behind them, understandably wouldn’t relish the trips down cancer memory lane that forming a support group entails. But for Noghès, starting a support group after being cancer-free for six years was empowering.

Her own 2001 breast cancer diagnosis was bookended by two melanomas, one in 1996 and the other in 2006. “I just broke the cycle,” she said, having finally made it more than five years without a cancer diagnosis.

Noghès has traveled to all seven continents and lived abroad with her husband for nearly 19 years, but says that “nowhere was more foreign than where we sat each time I was told I had cancer.”

Noghès was in Paris, where her husband was posted at the time, when she found out she had breast cancer. From January through August of 2001, she underwent treatment, including radiation and a lumpectomy, all while doing her best to fulfill her role as a diplomatic spouse, which she describes as a “full-time job.”

She appeared at events and was the ever-gracious hostess, but behind the brave face, business conferences and ball gowns was a woman silently battling a life-threatening illness. “I was all alone,” she said. “I had my husband, but he was at work. I didn’t know anyone who’d been through it. I didn’t have anyone to talk to. It was very lonely.”

Little did she know that at the time, her good friend Calliopi Mavroyiannis, wife of Andreas Mavroyiannis, deputy minister for European affairs to the Cypriot president, was going through the same thing. They often ran into each other at diplomatic events, but when one asked how the other was doing, they would both always answer, “fine.” Both women had lumpectomies and went through radiation but neither uttered a word about their cancer.

When asked about the reason for their silence, Noghès could only speculate. Perhaps it felt too overwhelming to talk about. Perhaps it was just the way things were then. Cancer wasn’t discussed openly in Europe at the time as it is now in the United States. Or perhaps, like politics and religion, cancer just isn’t considered polite dinner table conversation — especially when the table is at a formal diplomatic gathering.

Indeed, when faced with the social pressure to keep up appearances as a diplomatic spouse, most women’s first instinct isn’t to divulge their personal struggles.

It wasn’t until years later, when both Noghès and Mavroyiannis were living in New York City, that the silence was broken. While flipping through the member bios of a women’s club she planned to join, Noghès spotted her friend’s profile and was shocked to read that Mavroyiannis was a breast cancer survivor. Noghès picked up the phone and the two women had a long overdue conversation.

“We realized how silly we were that we didn’t talk about it,” Noghès said. It was then she decided that nobody should have to endure breast cancer in silence — and decided to do something about it.

Her first move was co-hosting a “pink party” with Mavroyiannis. “We didn’t want to do fundraising,” she said, “we wanted to raise awareness … to create an environment where diplomatic spouses from very different cultures could come together and discuss freely and comfortably their concerns, issues and experiences with breast cancer.”

The two women invited the oncologist they both saw in New York to speak and answer questions at the event, which attracted 75 women, mostly diplomatic spouses, including Nane Annan, wife of then U.N. Secretary-General Kofi Annan. “It was a huge success,” recalled Noghès. “Women from all the continents were feeling free to ask intimate questions.”

Guests wore pink and were served pink champagne. Even Prince Albert of Monaco, whom Noghès had learned a week before the event would be in town, arrived in a pink tie and posed for photos.

“We just get together and share experiences,” said Noghès. “We laugh a lot. We celebrate life.”

At first blush, a group of women getting together to chat doesn’t seem like much. On closer inspection, it’s clear these gatherings serve a much more significant function. When the wife of a diplomat is diagnosed with breast cancer, chances are she is far from home — and far from a network of friends and family. She hears the news in a foreign tongue from a doctor she probably doesn’t know, and she undergoes treatment in a medical culture that may be unfamiliar to her or even uncomfortable given her cultural beliefs. Having other women to talk to — in particular those who understand the feelings of isolation and rigors of diplomatic life — can be invaluable.

Some of the women in Noghès’s group have not told their own mothers about their diagnoses. In many parts of the world, cancer is still taboo. In some cultures, a cancer diagnosis can even jeopardize the social standing of your family or marriage prospects for female relatives.

But in Noghès’s group, there is no shame in cancer. As a show of support for one of the women who was concerned about her upcoming surgery and the resulting scar, women who’d had mastectomies or lumpectomies lifted up their shirts, proudly displaying their own scars as a badge of honor.

Noghès doesn’t shy away from talking about breast cancer. She described herself as “militant about it.” When she hears someone has been diagnosed, she reaches out right away to lend support. And when a female ambassador told her she hadn’t had a mammogram in years, she gave her the name of a doctor and promised to “bug” her until she made an appointment.

On Sept. 20, Noghès received special recognition for her work from the Prevent Cancer Foundation’s Congressional Families Cancer Prevention Program at its 20th annual Action for Cancer Awareness luncheon, which honors members of Congress and their spouses, as well as journalists and other public figures for outstanding efforts to support cancer awareness and prevention. She invited the diplomatic spouses in her support group to attend and accept the award with her at the Capitol Hill luncheon, where she was also joined by Marie Royce, wife of Rep. Ed Royce (R-Calif.), who nominated Noghès for the award and introduced her at the program.

Noghès is the first diplomatic liaison to the Congressional Families program. In that role, she helped to plan the 2011 Prevent Cancer Foundation’s Spring Gala, an annual fundraising event that salutes a different country each year. Founded in 1985, the foundation has provided more than $130 million in support of cancer prevention and early detection research, education, advocacy and community outreach nationwide.

Noghès has also served as a bridge between the diplomatic community and the Prevent Cancer Foundation, hosting a tea last year to introduce the group’s founder to her colleagues.

That sort of face-to-face interaction makes a critical difference when it comes to getting foreign delegations on board with planning fundraisers, because then you’re “not just asking a country to be there, you’re asking a friend,” Noghès said.

And for Noghès, cancer is not about numbers and statistics — it’s all about lending a helping hand to her friends.