Although she relishes being a diplomatic hostess and helping her guests feel at home, Fatiha Bennani Bouhlal of Morocco is also a businesswoman and nonprofit executive who wants to help improve the lives of others, especially children. 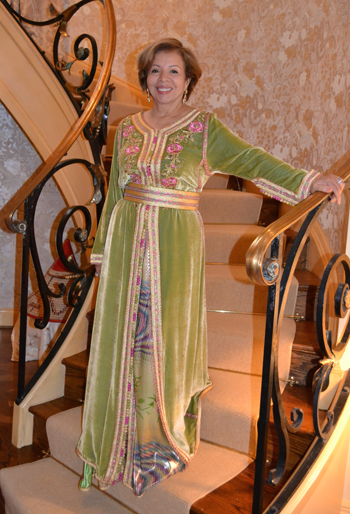 “It is such a joy to help others,” said Bennani, wife of Moroccan Ambassador Rachad Bouhlal, in an interview at the country’s stately residence in Potomac, Md. “People find pleasure in different things and this is what gives me pleasure. When I help, I feel thrilled for the person I helped…. I’ve always been there for people … it doesn’t occur to me not to help.”

Bennani is the founder and president of Association Espoir Trait d’Union, a nonprofit in Morocco that helps by digging water wells in remote areas of the North African nation and providing medical assistance to underprivileged children with heart diseases.

“We dig wells in remote areas where children have to walk miles and miles to fetch water elsewhere,” Bennani explained. “We sponsor cardiac surgery and some of the doctors and hospitals donate their time and space. We also have clinics.”

Others donate wheelchairs, which are modified for those patients who have special needs. “We are changing people’s lives,” she said. “We have brought 310 wheelchairs to Morocco and customized them for each child.”

A nurse and a mother herself, she understands what people need. “Two years ago, we built a center where children can get help doing their homework and learn about computers. It’s a big space so we have room for the girls to practice on sewing machines. They can sell what they sew and keep the money for themselves,” Bennani told us.

During her six years as a nurse, she developed an interest in the operating room, especially neurosurgery and cardiac surgery. That’s when she also thought about going to law school but decided to open her own insurance firm instead.

She began her insurance business in 1991. “It’s a multi-rich firm: maritime, car, work, everything. The time difference is five hours so I keep in touch by e-mail and Skype. What they do in their morning, I look at in my morning and leave them instructions for the next day,” Bennani explained. “When we were [posted] in Germany, it was only a one-hour difference so the distance wasn’t that much. While we were in Europe, I went back home every month.” Now she goes home every two months.

In between, Bennani works to represent her nation alongside her husband. “I am responsible for the image of Morocco,” she said. Although their Maryland residence is far from Embassy Row, she doesn’t mind traveling into the city to have lunch with her husband or attend diplomatic functions. “The miles never keep me from attending something important and what I want to do.” 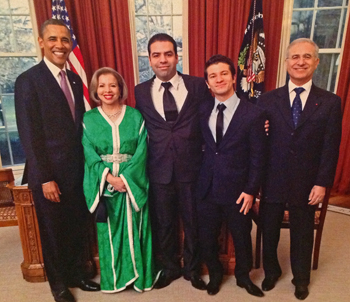 Fatiha Bennani Bouhlal is pictured with her sons and husband, Moroccan Ambassador Rachad Bouhlal, at his White House credentialing ceremony.

Before coming to Washington, the Bouhlals were in Germany for seven years and prior to that, he was Morocco’s ambassador to the European Union, Belgium and Luxembourg for three years. He is also a pilot and president of the Rabat Royal Air Club, as well as the founding member of the Wildlife Film Festival of Rabat.

They arrived in Washington three years ago. “America is colorful,” she said. “It is special. No other country is like America. It is a distinguished country.”

Of course, she thinks her homeland — a stable, progressive constitutional monarchy of 33 million located in the Maghreb region of North Africa — is also quite unique. “We are colorful, fascinating and intriguing,” she said. “We are a country that has received people of different religions, cultures and ethnicities. And we all live in harmony; we have always been a melting pot. Yet we have been able to keep our separate traditions — our food, our dress, our culture and the way we bring up our children.

“We are a tight society; your neighbor is like family,” Bennani added. “Morocco has a very relaxed atmosphere…. If you are a foreigner and you meet someone in the street, you will be invited home for dinner.”

Following through on the traditional Moroccan hospitality toward strangers, the Bouhlals, shortly after they arrived in 2011, visited each of their neighbors in their Potomac development of mini-estates and delivered huge plates of Moroccan sweets. “That’s what we do at home.”

“Only in Morocco,” she said proudly, “will you find a mosque, a synagogue and a church on the same street. No one will ask you what faith you are. We have always been brought up with respect for others even if different from ourselves. We don’t criticize other people for their faith.”

She added: “Our official languages are Arabic, Berber and French, but many people also speak Spanish. Others learn English and German.”

The Muslim-majority country is also a tolerant melting pot of religions, in part because of its history as a geographic crossroads and protectorate of Spain and France, having won a protracted independence struggle with France in 1956.

“The Muslims and Jews were chased out of Spain during the Inquisition and, in Morocco, they have coexisted,” Bennani pointed out. “The family court is divided into two: the Jewish and the Muslim. Each has their own judges and lawyers and secular laws for custody, inheritance and divorce.”

The kingdom also boasts a varied landscape, with deserts and rugged mountains that border the waters of the Mediterranean and Atlantic. “In Morocco, you can go ski, surf and hike. North to the south, it is the same country but we have different cuisines, cultures and way of doing things,” she said.

As a mother of two sons, Larbi and Othmane, she misses seeing her boys, but they have a family pact that all four of them meet twice a year: once in December and every summer at their home back in Morocco. Larbi, 31, is working in Montreal for a Zurich insurance firm with offices in Canada. “He comes here more often to get warm!” she joked. Othmane, 29, is in Paris where he started his own business, Chauffeur Privé. They both studied at McGill University in Canada and speak three languages fluently: Arabic, French and English.

Bennani met her husband in 1980. “I was a friend of his sister and saw him at his sister’s house. We met at a dinner party there and, ‘C’est ça!’ Eight months later we were married. We don’t waste time in Morocco.”