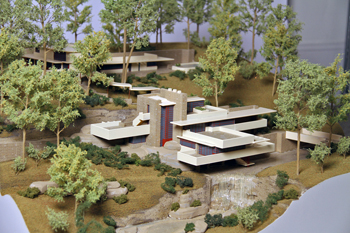 Home. It’s a word that has different but special meaning for everyone. Charlotte Perkins Gilman, a late 19th-century sociologist and author, called it the “center and circumference, the start and the finish of most of our lives.”

A model of Fallingwater in Pennsylvania, built by Frank Lloyd Wright in 1935, is on display at the National Building Museum.

For one person, it’s a ranch in Wyoming surrounded by jagged Rocky Mountain peaks. For another, it’s a closet-size studio apartment in Manhattan that barely fits a bed. For a third, it’s a two-story suburban house with red shutters, carefully manicured lawn and a wooden fence. It’s a Northern Virginia condominium; it’s a Southwest adobe hut; it’s a California houseboat; it’s even a shack in downtown Chicago.

“We all live somewhere,” reads the first sentence of a display board at the National Building Museum’s newest long-term exhibit “House & Home,” which invites wistful reminiscing from the moment visitors walk through the door.

“‘House & Home’ explores the idea that architecture and material culture can tell us complex stories about who we are, how we live and what we aspire to be,” said Chase W. Rynd, museum executive director, in a statement. “By exploring the diverse history of America’s homes, we can better understand our society’s priorities and possibilities, and, in turn, we can better understand ourselves.”

The array of hundreds of photographs, artifacts, household items, models, videos and “please touch” walls are drenched in nostalgia.

Visitors enter the exhibit through a gallery brimming with photos of all different kinds of houses and family gatherings. There’s an image of an Ohio cottage built in 1817, San Francisco row houses from the 1940s, and a line of fishing houses propped up on stilts by the water.

Surrounded by such images, I couldn’t help but think of the places I called home — from my blue childhood house in southeastern Ohio, where our golden retriever Montana sat waiting by the front door, to my “English basement” on Capitol Hill where my cat Princess Leia is never far from my heels.

Family pictures line another wall and are sure to get visitors thinking about their own memories of home. The images will ring familiar to most people: children in Halloween costumes, girls in frou-frou ball gowns standing by a stairwell before a high school prom, a family decked in Green Bay jerseys cheering a football game on TV.

The photos capture snippets of so many lives and represent a shared American experience. I stared in awe at the photo of a little boy sitting in his red wagon in his driveway — my mom had an almost identical photo of me doing the same thing at 5 years old.

The best part of “House & Home” is the second gallery, a display of almost 200 common household objects that populated homes throughout the past century — toys, kitchen utensils, old phones, record players, etc. The dated items look like they were pulled directly from a garage sale. But on their own, they become more than just relics of the past; they evoke strong memories and reveal how evolutions in technology and our own consumer culture have dramatically changed our everyday lives. 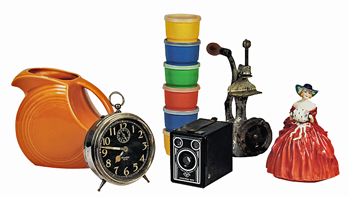 Among the many items and artifacts in the “House & Home” exhibition are, from left, a Fiestaware pitcher from the 1950s to ’60s; a 1920s Big Ben alarm clock; Tupperware snack cups from the 1970s; a camera and a meat grinder, both from the 1940s; and a 1962 Royal Doulton figurine.

A squishy beanbag chair reminded me of the hot pink one I used to sink into as a child watching “Fox and the Hound,” “Alice in Wonderland” or one of the dozens of Disney movies that lined our shelves. A Lincoln Logs set from the 1950s took me back to trips to our grandparents’ house, where we’d play with Dad’s old toys and ancient stuffed animals, some with an eye missing — objects Grandma obviously didn’t have the heart to pitch.

Everyone is bound to recognize and connect with the various objects on display, from a webbed folding lawn chair that neighbors would drag out to block parties, to a worn-in baseball glove, to the famous poster of Farrah Fawcett that sold a record 12 million copies in the 1970s. There’s also a kiddy pool, slow cooker, dog bowls, typewriter and a monopoly board.

They’re the everyday objects that fill our lives and often fly under our noses. But showcased in “House & Home,” they carry new life.

The long-term exhibit, which will be open to the public until May 2017, was designed by the award-winning New York‐based firm Ralph Appelbaum Associates. The company is best known for designing the U.S. Holocaust Memorial Museum and the physical science and space wing at the American Museum of Natural History in New York.

Along with dredging up memories, the exhibit chronicles the amazing transformation and diversity of American domestic life. Massive “please touch” walls made from materials used in residential construction, from adobe brick and mud plaster to solar panels and fiber-cement siding, tell the story of home-building over the last several decades.

In addition, a timeline explores the politics that shaped the American housing landscape, from land distribution and housing projects to mortgages and subprime loans. The chart, which runs the length of one gallery wall, includes the Indian Removal Act of 1830, when thousands of Native Americans were kicked off their land, as well as the Homestead Act of 1862, when the federal government offered Americans a free 160 acres for farming.

The timeline also shows how territorial disputes erupted throughout U.S. history. “We want white tenants in our white communities,” reads one sign in the section on segregation.

Meanwhile, films tell the story of contemporary American life, with six documentaries exploring communities such as an affordable housing project in New Orleans the historic neighborhoods of Washington, D.C.

That last documentary is sure to hit close to home, but so does the entire experience, which forces visitors to take a second look at the objects that make up what they call home. Whether that’s a historic colonial row house, a cramped college dorm room or a military barracks, it’s all home, and there’s no place quite like it.