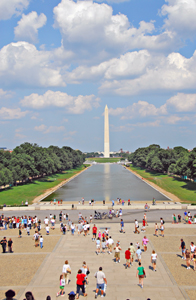 The White House is making strides toward its goal of attracting 100 million international visitors to the United States annually by the end of 2021, according to a new progress report on President Obama’s National Travel and Tourism Strategy.

When he launched the tourism initiative in 2012, Obama declared America “open for business” and sought ways to make traveling to the U.S. smoother and more attractive.

“We are on track to meet our goal, and we have made significant progress on specific actions to encourage and make it easier for international travelers to visit the United States,” says a report issued in May by the White House.

Tourists take in the National Mall in Washington, D.C. The Obama administration is trying to make it easier for foreign travelers to visit the U.S. by streamlining the visa application and airport entry processes.

America’s travel and tourism industry is a key economic driver, supporting 8 million jobs last year. While the United States remains a top tourism destination, the logistical headaches of visa applications and tighter security restrictions in the wake of 9/11 deter many foreigners from visiting. The hassles of coming to America are acutely felt in emerging nations such as Brazil and China, where a growing middle class is opting to vacation elsewhere because of lengthy wait times and onerous fees to get a U.S. visa and long distances to reach U.S. consulates.

The White House cites specific successes in minimizing these irritants. Among them: The State Department issued 9.2 million visas in 2013, up 42 percent since 2010; wait times for visas in Brazil and China dropped from 100 days to less than five on average; Greece, Taiwan and Chile joined the 35 countries in the Visa Waiver Program; and there was a 60 percent increase in the number of people who have access to U.S. Customs and Border Patrol’s Trusted Traveler Programs, which expedite pre-approved, low-risk travelers.

The number of visitors to the United States has increased by 78 percent since 2001, when tourism took a major hit after the Sept. 11 terrorist attacks, from 39.2 million that year to 69.8 million in 2013, according to the Commerce Department. Those nearly 70 million tourists spent a record $181 billion while here last year. Each overseas visitor spends on average $4,500 per visit at American hotels, shops, restaurants and other local businesses.

Because tourism is a major contributor to the U.S. economy, Obama wants to bring in even more guests. So the president tasked the State Department and other travel-related agencies such as the Homeland Security Department with cutting some of the red tap and improving the visa application and entry process, according to a State official.

“The Department of State has elevated the role of economics in everything we do,” the official said. “We’ve sharpened our thinking about how market forces can advance foreign policy goals. We’ve made it easier for businesses to work with our embassies, as consular officers continue to facilitate legitimate tourism to the United States.”

For instance, State has invested millions of dollars on existing and new facilities in Brazil, China, India and Mexico, which accounted for almost half of the visas issued last year. It also hired more officers in China and Brazil, which increased capacity by about 600,000 and 700,000 interviews, respectively.

Moreover, the department is implementing the Global Support Strategy (GSS) to make the visa application process — the first impression many foreigners have of the U.S. government — easier. Visitors receive application information, schedule appointments, pay fees, arrange for document delivery and in some cases provide fingerprints through one interface before they go to the consular section for their interviews.

“GSS services will soon be provided for 99 percent of our worldwide visa volume,” the State official said. “GSS replaced the previous contractor-provided visa support services at overseas posts with a single contract and comprehensive process for logistical arrangements preceding the actual adjudication process. The system has allowed consular managers to increase per-officer adjudications without adding staff, has improved transparency, and has established uniform service standards and goals.”

For example, under GSS, 14 applicant service centers in Mexico allow visa renewal applicants to complete much of their processing in one visit that averages 20 minutes or less. The result is lower costs to applicants, the official said, because third-party fees are gone.

Additionally, State officials now interview more than 92 percent of applicants within three weeks of their appointment request, the official noted.

“They instituted changes that have really made the process more efficient without taking away the security protocols,” said Patricia Rojas-Ungár, vice president of government relations at the U.S. Travel Association.

The association surveyed 1,200 overseas travelers in 2013 and found that 43 percent said they would recommend avoiding a trip to the United States because of hassles with the entry process.

“The fastest way to grow our international inbound travel is by increasing the Visa Waiver Program,” Rojas-Ungár said. “We’d like to see new countries added to the program,” such as Brazil, Croatia, Israel and Poland.

She would also like to see the term length for multiple entries on one visa for Chinese nationals extended from one year to at least five. For Brazilians, U.S. visas are good for 10 years.

“That means there are less people doing renewals who are clogging up the line,” Rojas-Ungár said.

Overseas tourism is about more than the economy, however. It can also help foster international diplomacy.

“We really think that the best ambassadors to the U.S. are actual American citizens here in our country,” Rojas-Ungár said, “and research has shown that when people come to the United States, they’re more likely to have a better impression of Americans, our culture and our policies, so we do believe that this is the best foreign policy out there.”