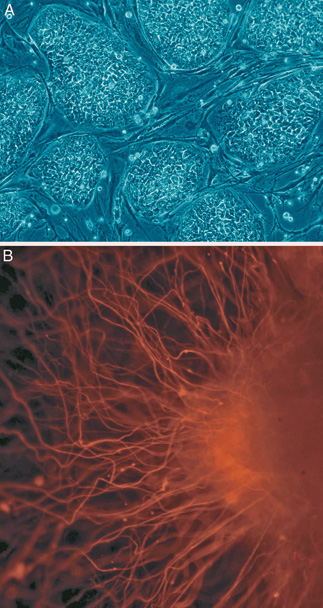 Tantalizing news about the prospect of using stem cells to treat neurological disorders comes from a pair of related studies published in early October in the journal Science Translational Medicine. Scientists from the University of California in San Francisco were successfully able to transplant neural stem cells into the brains of four little boys with the most severe form of an inherited brain disorder called Pelizaeus-Merzbacher disease.

Virtually all people with this disease (known by the shorthand PMD, for obvious reasons) are male — like hemophilia, it’s an “X-linked” disease, passed down by asymptomatic mothers to their sons on the X chromosome.

When a baby is born with PMD, everything seems normal at first. But by the time he is six weeks old, his parents will notice that their little boy’s eyes frequently seem to be doing a strange sort of back-and-forth dance, as if he’s watching a very fast tennis game. As he grows, he stops meeting the normal baby milestones — he can’t hold his head up, or roll over, or sit up, or crawl. And he will never get any better. In most cases of this form of PMD, he will only continue to get worse, and ultimately die.

This is because PMD is a dysmyelinating disease — meaning that boys with the condition have virtually no myelin, the fatty sheath that insulates brain cells and helps them transmit signals more smoothly. Unlike multiple sclerosis, which worsens unpredictably as inflammation destroys existing myelin over time, patients with PMD never have any myelin at all.

PMD is rare, and until now there has been no treatment or cure, especially for the most severe type. But using a type of neural stem cell that is known to tend to turn into oligodendrocytes — the kind of brain cell that produces myelin — the researchers were able to spark the growth of new myelin in the boys’ brains. Over the course of the yearlong study, MRI (magnetic resonance imaging) findings showed that myelin levels in three of the boys increased by about 6 percent — about half of what would be expected in a normal child, but a vast improvement over the 0 percent that is usual for most boys with severe PMD.

Even more exciting, these MRI findings appeared to translate into small, but unmistakable signs of improvement in the three boys. (The fourth child appears to be “stable,” according to the study.)

“These kids are severely disabled — they don’t have fine motor movements, they have difficulty controlling their heads and looking around, and they cannot do basic things for themselves,” said Dr. Nalin Gupta, associate professor in the Department of Neurological Surgery and chief of pediatric neurological surgery at Benioff Children’s Hospital at the University of California in San Francisco, who led the study there. “They’re not standing up and walking down the hall now, but their head control has improved, their eye control has improved, and their general motor function has started to get better. One is even starting to walk with a walker. Now, this is a very small study and you can’t make any sort of conclusions based on it, because this could be a fluke. But it’s very unexpected, to say the least, to have children like these improve.”

And the procedure overall appears to be safe, without any major side effects, which is one of the biggest worries involved with something as risky as suppressing a critically ill child’s immune system and then transplanting foreign cells directly into his brain.

The next step, assuming that the study’s sponsor — California-based StemCells, Inc. — decides to move forward with one, would be to do a larger Phase II study, involving closer to 30 or 40 children. That would likely take another two years, says Gupta. Considering how rare the disease is, it’s unlikely that scientists could find enough children who qualify to participate in a standard, large Phase III trial, but if a Phase II shows enough promise, it’s possible that the Food and Drug Administration might consider confirming its results with small studies in a more common demyelinating disease, such as multiple sclerosis.

All of this involves a lot of guessing and speculating. Gupta strongly stressed that the study results so far, however encouraging, are very limited and really only illustrate the apparent safety of the procedure and the fact that the growth of the myelin after the transplant can be tracked with MRI.

It’s still in the early days, and such transplants are fraught with pitfalls. But the fact that there is even the possibility of a treatment for a rare and devastating disorder like this one is exciting — and the potential that it could be tried in many other myelin-related disorders is even more so. We’ll be watching to see if StemCells, Inc. moves ahead with a Phase II trial.