Photos: The Central State Museum of the Republic of Kazakhstan, Almaty

More than 150 recently excavated objects reveal the sophistication of ancient nomadic culture in the Eurasian Steppe, including items such as a Belt Terminus with granulation and argali decoration.

At the Arthur M. Sackler Gallery, transient and well-connected denizens of the District can meet their ancient counterparts: the nomadic tribes of Iron Age Kazakhstan.

“Nomads and Networks: The Ancient Art and Culture of Kazakhstan” is the first U.S. exhibition devoted entirely to the nomadic culture of ancient Kazakhstan. It includes more than 150 recently excavated objects of gold, horn, precious gems and organic materials from the eighth to third centuries BC.

The term “nomad” implies a lack of direction, or even arrested development. It’s a word you might use to describe a kid bumming around Europe after college instead of applying to grad school, or the friend who always seems to be trading one job or city for another.

Settled society has long considered itself superior to those who wander. But recent archeological discoveries in the Altai Mountains of eastern Kazakhstan, near the border with Russia and China, call into question common assumptions about nomadic peoples. This exhibit reveals a complex ancient society built around nature, with strategic migratory routes based on the seasons, for instance, intricate rituals, and active exchange networks. 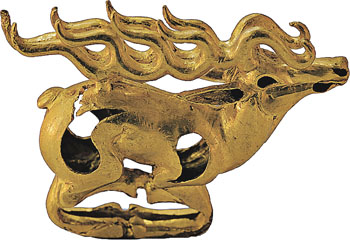 In addition to challenging the notion that nomadic tribes were less sophisticated than their settled contemporaries, these artifacts dispel common misperceptions about their country of origin by presenting a cultural and historical richness noticeably absent from news coverage of the region and contradictory to stereotypes like those presented in the film “Borat.”

Geographically, Kazakhstan bridges the gap between Europe and Asia, covering an area four times the size of Texas. “One of our goals for this exhibition was to bring territory that is in Asia but not at all present in American minds to a Washington, D.C., audience,” said Alexander Nagel, curator of ancient Near Eastern art at the Freer and Sackler Gallery. “Washingtonians are by nature nomads who are traveling through the city for a limited period of time, giving the exhibition a unique connection to D.C.,” he added.

To put the artifacts in context, the exhibit opens with an introduction to the landscape and history of archeological excavation in Kazakhstan. Petroglyphs, images carved on rock face, that might have once demarcated sacred places feature animals the nomads would have encountered in everyday life and depict scenes that may refer to their mythical or spiritual beliefs.

On a bronze tray atop a conical stand, the figure of a man kneels before a horse. The tray, perhaps used to burn incense or oil, conveys the deep connection between the nomads and the natural world. Animals, especially, played an important role in their way of life and belief system, often appearing in decorative motifs or ritual practices. 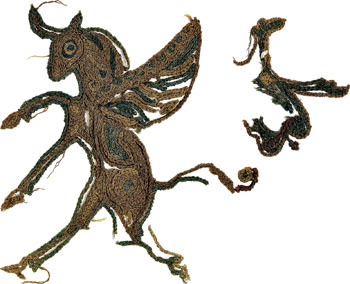 A highlight of the exhibit are recently excavated artifacts from a cluster of 70 burial mounds, or “kurgans,” that have been superbly preserved in the frozen soil, or “permafrost.” Here, the elite of nomadic society were laid to rest, accompanied by valuable treasures and sacrificial horses clothed in ornate decorative garb. One of the most striking pieces is a wood-and-gold-leaf horse headdress resembling ibex horns.

In an adjacent room, a cluster of large bronze cauldrons crouch like spiders on bent spindly legs. These too are decorated with animal motifs. Archeologists are not certain what purpose the cauldrons served, but it is easy to imagine people gathering around them, telling stories while preparing a communal meal.

Because they left no written record, these discoveries provide important insight into what life was like for the nomadic horseman of the Eurasian steppe. In addition to revealing complex rituals and social customs, several artifacts provide evidence of trade and cultural exchange with neighboring empires.

A diadem from the Kargaly region is a stunning example. This golden crown is inlayed with precious gems and depicts imagery from Chinese celestial iconography. The appearance of a winged ibex on other decorative objects in the exhibit suggests a link to Persia, where the motif is commonly seen in artifacts found at the ancient city of Persepolis in modern-day Iran. This link is supported by carvings found at Persepolis that depict nomads (identifiable by their pointed hats) bringing tribute to the Persian king.

What is clear is that this was a flourishing and prosperous society. These objects tell the story of a sophisticated people who traveled strategic migratory routes and maintained networks of communication and cultural exchange with their neighbors. Though it is a small exhibit, “Nomads and Networks” presents a compelling portrait, replacing the image of the aimless wanderer with that of the horseback warrior, skilled artisan, prosperous pastoral herder, and culturally savvy trader.

Nomads and Networks: The Ancient Art and Culture of Kazakhstan