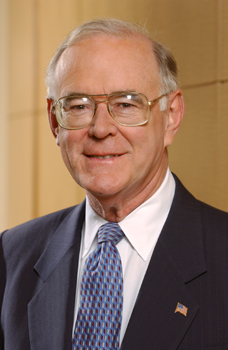 Charles T. Manatt wasn’t a career diplomat, knew little about international relations, and barely spoke Spanish — “just enough to order a beer in Tijuana,” he joked — when President Clinton named him ambassador to the Dominican Republic in 1999.

Manatt won the appointment thanks to his leadership qualities as a well-known corporate attorney and his decades of public service that culminated with serving from 1981 to 1985 as chairman of the Democratic National Committee. Most recently, Manatt was chosen to head the Council of American Ambassadors — an organization representing former and current U.S. ambassadors who were appointed to their posts rather than having climbed up the ranks of the Foreign Service over a period of decades.

“The overriding purpose of our group is to directly promote public diplomacy in every good meaning of that work: support for the State Department for their professional work and, to a degree, to explain to the people of the United States what the role of an ambassador is,” said Manatt, who’s been involved with a large number of organizations over the years.

Besides having been ambassador, Manatt — who graduated from Iowa State University in 1958 and got his law degree from George Washington University in 1962 — became chairman of the GWU Board of Trustees in 2001. A former president of the California Bankers Association, he also currently serves on the Board of Directors for the Wesley Foundation, Meridian International Center, Mayo Foundation, FedEx Corp. and the National Museum of American History, and he was a past chairman of the International Foundation for Election Systems and the National Democratic Institute, among various other foundations and endowments.

Manatt, 73, spoke to The Washington Diplomat last month from his office at Manatt, Phelps & Phillips LLP, the law firm he founded in California in 1965. It now has 350 attorneys in eight offices nationwide, and annual billings in excess of 0 million.

According to the former ambassador, more than two-thirds of the 220 or so men and women heading missions at 172 U.S. embassies overseas and before various international bodies like the United Nations and the Organization of American States (OAS) are career diplomats, while the rest are political appointees.

Manatt says political appointees make just as effective ambassadors as do career diplomats. “Talking averages, by the time they’re selected as an ambassador, a political appointee should have so much experience in business, law, humanities or education that he or she would have developed leadership skill sets in terms of understanding organizations. Many of the [political appointees] I have met are very good, solid people who haven’t been in government for 20 or 30 years, but they’ve been very active citizens, in ways that people who have had their whole careers at the State Department cannot do.”

Established in 1983, the nonprofit, nonpartisan Council of American Ambassadors (CAA) has around 230 members — the vast majority of them Republicans appointed by Ronald Reagan and both Bushes. The group also includes Clinton appointees like Manatt, as well as a handful of older ex-ambassadors whose appointments date back to the Carter administration.

The council has also developed two fellowship programs — one targeted at undergraduate students interested in careers in international affairs, and the other designed for mid-career public diplomacy officers at the State Department.

The fellowship program enables six students to come to Washington each year for a program that combines mentoring by former U.S. ambassadors, internships at the State Department, and academic studies at Georgetown University. The group also publishes a biannual scholarly magazine, The Ambassadors Review.

“It would be healthy to have more formal contacts with foreign ambassadors in Washington,” Manatt noted. “I think we’re going to promote that.”

Manatt was elected president of CAA in April 2009, succeeding Bruce S. Gelb, the former U.S. ambassador to Belgium and ex-director of the U.S. Information Agency.

“We invite anyone who’s had a Senate confirmation for an ambassadorship,” said Manatt. Some of the CAA’s newest members and their former posts include Frank E. Baxter (Uruguay), Nicholas F. Taubman (Romania), William R. Timken Jr. (Germany) and John F. Maisto (Nicaragua, Venezuela and OAS).

“Being an ambassador is such a mind-bending experience for most businessmen or businesswomen, lawyers and former governors who were never focused on foreign policy,” said Manatt. “This exposure in getting trained by the State Department and living through this experience is something that changes most everybody for the better.”

Manatt said his brief diplomatic career was launched at a Christmas party at the home of then-Vice President Al Gore, when Manatt told Gore he wanted to get involved in his 2000 presidential campaign. One thing led to another, and the White House eventually asked Manatt to be the U.S. envoy in Santo Domingo, partly due to his expertise on the Caribbean Basin Initiative and intellectual property rights — two issues that dominated the agenda of bilateral relations between the United States and the Dominican Republic.

But it wasn’t exactly smooth sailing for the prominent Democrat, who got involved in politics at the age of 15 and has known Bill and Hillary Clinton for 32 years.

“It took me eight months to get nominated. The hang-up was Jesse Helms,” he recalled, referring to the former Republican senator. Once nominated and confirmed, Manatt was able to study Spanish at the Foreign Service Academy. “My two times working in government were 40 years apart. One was the Army, one was my ambassadorship. I clearly liked the ambassadorship more.”

In Santo Domingo, Manatt supervised what he called “a decent-size embassy” with 525 employees, 400 of them local hires. He said the experience reinforced his interest in public diplomacy.

“Most of the professional work is done by your staff. You will succeed if you’ve got the right understanding of leadership — which means making your staffers look good in the service of your country,” he explained. “Remember that [as a political appointee], once you’re done being an ambassador, you’re back in the U.S., but that’s not true with these people. It’s their career.”

“We saw good progress in the area of drug interdiction and stemming the flow of drugs from Colombia,” he said. “We also helped knock down trade barriers for all the Caribbean countries,” culminating in the Dominican Republic–Central America Free Trade Agreement (DR-CAFTA) negotiated during the later ambassadorship of Hans Hertell, a Bush appointee who is also a member of CAA.

“At the time, more enforcement was needed on rules and regulations related to pharmaceuticals, software and the music industry. I probably have 25 lawyers in my firm working on IPR alone,” Manatt told The Diplomat, adding that one of the ironies of heading a U.S. mission overseas is that you no longer have legal representation and “all of a sudden, you gotta be your own lawyer.”

Asked what he liked most about being ambassador, Manatt said it was helping people. “I remember when my wife and I went to a girls’ school, put on a Santa Claus hat and gave out gifts to the kids, and they lit up,” he recalled. “After Hurricane Georges hit in 1998, we were very active in hurricane relief, putting up new houses. That was the most rewarding thing of all.”

And what did he like the least? Bailing out U.S. citizens who came down to the Dominican Republic and landed in jail for one reason or another. “You can’t believe how foolish some people are — including doctors, professional people, even schoolteachers — and the trouble they get themselves into,” he said, noting with concern the DR’s enduring reputation as the sex-tourism capital of the Caribbean. “As ambassador, I felt responsible for every American citizen in the country.”

Manatt, who as ambassador often worked with his counterpart in Port-au-Prince to promote investment in the border area of Hispaniola — which is shared by Haiti and the Dominican Republic — said the U.S. government should focus on improving Haiti’s educational system as a way of averting further suffering in the wake of the Jan. 12 earthquake that killed an estimated 230,000 Haitians and left much of Port-au-Prince in ruins.

“I would be quite sympathetic to Haiti,” he said. “To begin with, the schools are dilapidated. How will kids get an education? That goes way beyond curing the immediate physical misery. By far, the single most important thing we can do for Haiti is support educational programs as a way out of their poverty.”

Like many former diplomats, Manatt says the U.S. embargo against Cuba is wrong-headed, suggesting that “for me personally, I’d drop the embargo and flood Cuba with American tourists.” He also called the Caribbean Basin Initiative (CBI) an unqualified success.

“It has since morphed into DR-CAFTA, but that probably wouldn’t have existed if not for the CBI. If they hadn’t focused on changing the trade rules, a lot of investment would have gone to Costa Rica instead. We want Costa Rica to do well, but we also need investment in Caribbean countries like Trinidad, Jamaica and the Dominican Republic.”

As such, he noted that Puerto Rico has a special role to play regarding economic development, the promotion of cross-border trade, educational and exchange programs, and cooperating between universities in both Puerto Rico and the Dominican Republic.

“We need more support and more financial resources for the Caribbean,” urged Manatt, speaking about the islands in general. “With the wars in Iraq and Afghanistan, many of those resources were diverted away from the region. Remember, we’ve got Canada, Mexico and the Caribbean — that’s three neighbors, not two.”

After his posting in Santo Domingo expired and he came back to Washington, Manatt got active in the National Endowment for Democracy, the Center for International Private Enterprise, the National Democratic Institute and other locally headquartered think tanks.

“Maybe a quarter of all ambassadors, once they return from post, either join a law firm or an advocacy firm, while some of us choose not to do that,” said Manatt, though he pointed out in justification that “in addition to doing good work, you also want to be paid.”